White Rage: The Unspoken Truth of Our Racial Divide

White Trash: The 400-Year Untold History of Class in America

The key piece of propaganda in the current U.S. presidential race appeared not in the form of some duplicitous ad or a disingenuous policy plank. It came as a baseball cap. You know the one: bright red, with a functionally pointless length of rope drawn across the brim. The one that bleats, in all-caps, serif font, "MAKE AMERICA GREAT AGAIN."

Donald Trump's trademark piece of mock-proletarian headgear is brilliant. (Albeit in that same nefarious, sinister, but utterly effective way that, say, marketing nicotine to children can be considered "brilliant.") In its simple, shout-y messaging, it achieves a dazzling semiotic trick, convincing anyone who reads it that the United States of America, that plucky little colony that cast off the yoke of its British masters, hucked some tea into Boston Harbor and embarked on its noble democratic experiment, has fallen from grace, and that Donald Trump, a wealthy real-estate impresario and reality-TV star who once publicly expressed a desire to date his own daughter, can restore it to its former place in the sun.

Whether or not Trump can do this, the hat can't say. But what the hat can say is that America was – for sure – great, once upon a time. And so, it follows, America can be made great again. Somehow.

What the hat strategically sidesteps is the most galling, unaskable question of all: What if there's no past glory to restore? What if America always was, from its very inception, a rank bog of structural inequality, racial and social divide, and arrogant, undeserved exceptionalism?

Big questions for a hat to ask. Granted.

But they're at the centre of two weighty, bracing new books: Carol Anderson's White Rage: The Unspoken Truth of Our Racial Divide and Nancy Isenberg's White Trash: The 400-Year Untold History of Class in America.

Both set out, in different ways, to dismantle the grand myths of America. These are myths in both the traditional, classical way (i.e., a foundational narrative or story) and the thornier, ideological way. Myths, the French theorist Roland Barthes noted, make the particularities of history seem like natural laws: "It abolishes the complexity of human acts … it organizes a world which is without contradictions, because it is without depth, a world wide open and wallowing in the evident." Myth is a way of understanding the world. As Nancy Isenberg puts it in White Trash, in a nice, Howard Zinn-ish turn, "The compression of history, the winnowing of history, may seem natural and neutral, but it is decidedly not."

Isenberg is chiefly interested in America's myth of classlessness: the idea of social and economic mobility that distinguished the American experiment from the social and political orthodoxies (monarchy, nobility etc.) of its colonial forefathers. And yet, as she notes, "brutal exploitation was the modus operandi of the English projectors who conceived of the American colonial system."

The American colonies were viewed by European social planners as a kind of continental garbage heap, where "waste people" (criminals, vagrants, debtors and other social detritus) could be transported and put to use "fertilizing wasteland with their labour." To wit: The English referred to the early settlers, unabashedly, as "manure." (This is something I've always loved about the depiction of the Jamestown colony in Terrence Malick's 2005 film The New World, a film recently rereleased on home video, as if to coincide with timely reconsiderations of America's foundational myths: Its depiction of the early colonists is, by and large, unflinching. Excepting Colin Farrell's Hollywood-handsome John Smith, they are tatty, ignoble, slouched, dirty – not Europe's brave conquerers, but its dregs and castoffs.)

That North America was, by Europe's estimation, a wasteland to be seeded with the manure of human life doesn't damn America itself. After all, the story goes that it was by sheer industry and determination that such waste people were able to ennoble themselves, cast off the shackles of colonial rule and create just about the best gosh-darn democracy the world has ever seen! Right? Not quite. As Isenberg writes, "Independence did not magically erase the British class system, nor did it root out long-entrenched beliefs about poverty and the willful exploitation of human labour."

Nothing so critically undermines the U.S.'s foundational myth of "all men are created equal" shtick as the horrific fact that it was, until the mid-19th century, a nation of slaves and slave owners. The bulk of America's fabulous wealth was built on the back of exploitation, free labour and forced servitude. In White Rage, Carol Anderson figures that, in 1860, just before the U.S. Civil War, "80 per cent of the nation's gross national product was tied to slavery." And it wasn't just a southern problem. While the hundreds of years of torture, subjugation, rape and bondage that defined the plantation slave system were unspeakably awful in a way that can't be underestimated, such blatant violence, Anderson writes, "was simply the most overt, virulent expression of a stream of anti-black sentiment that conscribed the lives of both the free and enslaved."

Ideology can be a tricky thing. Thinkers like Louis Althusser and Noam Chomsky make ideology seem almost supernatural, a kind of magic that binds citizens to political realities; "not just as a set of values espoused by a dominant group, but as a fact of our shared existence, like gravity," as it was described, by me, here in Globe Books a few years back in a review of Althusser's On the Reproduction of Capitalism. But the thing is, ideology is also a set of values not only espoused by a dominant group, but systematically codified and institutionalized.

This is what Anderson, a professor of African-American studies at Emory University, means by "white rage," which she distinguishes from depictions of "black rage" that circulate in the media: protesting in Ferguson, rioting, looting and other, more conspicuously explosive manifestations of anger. White rage, she writes, "works its way through the courts, the legislatures, and a range of government bureaucracies. It wreaks havoc subtly, almost imperceptibly. Too imperceptibly, certainly, for a nation consistently drawn to the spectacular; to what it can see."

An expansion of a 2014 Washington Post op-ed titled, "Ferguson Isn't About Black Rage Against Cops. It's White Rage Against Progress," White Rage is a short, but incredibly dense and detailed book – boasting nearly 700 notes and citations in less than 200 pages.

Instead of making the heady, conceptual case for the institutionalization of racism and indignity in America, Anderson makes a material case. She spends chapters detailing precisely how antebellum laws essentially equipped black Americans for failure. She pays particular attention to disparities in funding for Jim Crow-era segregated schools. "The U.S. educational system," she writes, "despite demands from parents and students craving high-quality schools, had deliberately produced a sprawling uneducated population that would bedevil the nation well into the 21st century."

White Rage collects a number of case studies illustrating America's race divide: from Richard Nixon's "strategic dog-whistle appeals" to Southern racists, to the Reagan administration essentially okaying the inner-city crack "epidemic" in order to funnel drug money to anti-Sandinista guerrillas in Nicaragua, deviating urban black communities to prop up a puppet regime some 3,000 kilometres away. It might all seem very conspiratorial and cloak-and-dagger, were it not also true. Reading through all the frightfully inventive ways in which America makes racial inequality a matter of law (and order) has a dizzying effect: like watching a quick-cut montage of social injustice spanning nearly half a millennium.

White Trash, by contrast, offers an extended view. It spans from pre-colonial plots to relocate Britain's human rubbish, to Thomas Jefferson's notion of "whiteness as an automatic badge of superiority," to modern depictions of the "redneck," "cracker" and "country boy," such as Elvis Presley, Tammy Faye Bakker, Deliverance and Duck Dynasty. Isenberg's greatest historical and sociological intervention is not just the idea that divide and stratification exist between races. Or that such divisions exist within them. It's that it has always been this way. "American democracy," she insists, "has never accorded all the people a meaningful voice. The masses have been given symbols instead, and they are often empty symbols."

Empty symbols. Convenient fictions. The baseless myths of a world drained of depth. Like a billowy baseball cap, clown-nose-red, filigreed with a superfluous piece of rope, barking MAKE AMERICA GREAT AGAIN, covering up a frankly confounding coiffure which may or may not be a $60,000 weave, sported by a Cheeto-tinted racist. Lies piled on top of lies piled on top of lies. Reading both Anderson and Isenberg's books proves utterly infuriating, precisely because their deep dive beneath the structuring fables, myths and lies of the American consciousness is meant to afflict – not to comfort.

Sometimes the seething undercurrents of racial rage and class antagonism bubble up and boil over. As they did earlier this year, when a 22-year-old black woman from Staten Island, N.Y., was met with assault and death threats. All for wearing a baseball cap to her job at a local Home Depot: one emblazoned with the bold, bracing, inciting, all-caps message, bellowing back at the Trump propagandists, "AMERICA WAS NEVER GREAT."

Simple, self-evident, convenient and uncomplicated in its own way. And certainly spectacular. But as hats go? It's something to get behind – a simple, unadorned ball cap that, like these two acutely topical new books, dares to read against myth.

John Semley is a Globe Books columnist. His first book, This Is a Book About the Kids in the Hall, will be published this fall.

Review: Kamal Al-Solaylee’s Brown is essential reading for understanding the non-white world
April 11, 2017
Book Review
Review: Ta-Nehisi Coates illustrates how racism has diffused through America’s institutions and everyday life in Between the World and Me
March 22, 2018 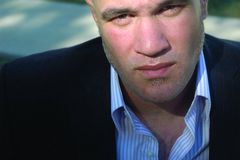