Peter Hedges, the writer/director, chokes up as he tells me this story about his son Lucas Hedges, the actor.

It was Day 3 on the set of Ben Is Back, a film Peter wrote and was directing. Lucas – who earned an Oscar nomination for Manchester by the Sea and appeared in two of last year’s best picture nominees, Lady Bird and Three Billboards Outside Ebbing, Missouri – was playing the title character, a recovering addict who leaves rehab to come home for Christmas. Julia Roberts was playing Ben’s mom, Holly, worn down by Ben’s relapses but determined to be optimistic. The film, shot in snowy upstate New York, is an emotional high-wire act that takes place over one dark, raw night. (It’s opening this month in select cities.)

To say that Ben Is Back is personal to both Hedges is to undersell it. Peter’s late mother was an alcoholic who left their home when he was a child, returned when he was 15 and dedicated the last 22 years of her life to helping people in recovery. Other family members have been threatened by addiction, too. For years, Peter – who wrote the scripts for, among others, What’s Eating Gilbert Grape and About a Boy – had been reading obituaries, noting the increasing number of addiction-related fatalities, and especially noting how many obits included sentences such as, “He was two years clean.” He was thinking a lot about the Prodigal Son, his favourite parable, and Orpheus, his favourite myth (about venturing into Hell to save a loved one). He was also feeling helpless after Donald Trump’s election and determined to refocus his career on what he calls “urgent, relevant work.”

He wrote the script in a six-week burst. Secretly, he hoped Lucas would play Ben, but he knew the danger of that. “Parents don’t direct their children,” he told me in a hotel room interview during last September’s Toronto International Film Festival. “It rarely happens and it mostly doesn’t go well.” (Sofia Coppola in The Godfather: Part III. Enough said.) In fact, Peter had given Lucas his first role, one line in his 2007 film Dan in Real Life – then cut it in the editing room.

Lucas, who turned 22 on Dec. 12, had reservations of his own. “When my parents visit me on sets, I never even let them watch the monitors, because it makes me uncomfortable,” he said in a recent phone call from New York, where he’s starring on Broadway alongside Elaine May, Joan Allen and Michael Cera in The Waverly Gallery, written by Kenneth Lonergan. “There’s a reason every kid needs to go through an individuation process, and I’m in the midst of that. I’m claiming my independence in the film world, and in life. I didn’t need any more ties to my family than I already have.” (His mother, Susan Titman, is a former actress.)

But Lucas loved the script and Roberts had requested to work with him. So he resolved that during the two-month shoot, he would call his director Peter, not Dad, and keep a professional distance, “so we could technically work together and things weren’t always so super-charged,” he says.

But on Day 3 after an emotional scene, Peter called cut, ducked behind the monitors, and burst into tears. “I’m talking to you as a father now,” he told his producers. “Lucas is only in good movies. I’m so afraid I’m going to fail him.” Peter wrote Ben is Back as a paean to parental love – what kind of father would he be if he let his son down?

That sounds dramatic, but only if you don’t know Lucas’s work. Some talent is preternatural; it just gleams brighter than most. Lucas has it.

He had it right out of the gate. At his arts-focused school, Saint Ann’s, in his neighbourhood, Brooklyn Heights, Lucas made his stage debut in Grade 7, playing Smike, a disabled, abused orphan, in the school’s production of Nicholas Nickleby. There are a lot of talented kids at Saint Ann’s; its alumnae include Lena Dunham and Jennifer Connelly. But when Lucas came on stage, “immediately he had this inner life that was so rich,” Peter says. He felt the theatre go quiet.

At intermission, Peter ran into some high school students. He asked why they were there. They said, “It’s required.”

“Your teachers make you come to the middle-school play?” Peter asked.

A casting director who saw his Smike introduced Lucas to Wes Anderson; Anderson cast him in Moonrise Kingdom and The Grand Budapest Hotel; and it’s been up-up-up from there. At this moment, in addition to Broadway and Ben Is Back, Lucas also stars as a ferocious brother in Mid90s, the directorial debut of Jonah Hill; and as a gay teenager whose religious parents, played by Russell Crowe and Nicole Kidman, send him to a conversion camp in Boy Erased (he just received a Golden Globe nomination for best actor – drama). “It was always the thing I wanted most, to have the life of an actor and filmmaker, to be part of more worlds,” Lucas says.

On the talk show circuit, he’s a bright, bouncy presence. On the phone, he’s thoughtful, articulate. For example, here’s what he says about working with Roberts: “What I respect about her process is, she just wants to engage with you as a human being. I think she has enough experience in this art form that she knows how to be effortlessly herself, because she stands so confidently in what she knows about herself. She’s unshakable. Being around that is inspiring for me. I’m on my own long journey toward that, in whatever form it will take in my own life.”

On screen, Lucas is something else entirely, scratchy-raw-vulnerable-angry-funny, and always real. He sort of knows how he does it – it’s partly an ineffable thing and partly practical. “It’s me getting in front of the camera and not thinking about myself,” he says. “If you put anybody in front of a camera and they manage to not be self-conscious, they’re fascinating. The actor can be thinking anything – ‘What colour is that wall, blue or grey?’ – and all of a sudden you’re watching someone who’s alive within a world. Then stuff naturally rises.”

Lucas isn’t a dark person. He’d love to do comedy (although he feels he has to grow into that. “Comedians risk more than dramatic actors,” he says. “There’s nothing more vulnerable than a comedy”). But he has “a capacity for darkness, and for understanding it.

“It always felt natural to me,” he continues. “The environment of acting is already such a terrifying thing. There is an abusive feeling to going up in front of an audience. There’s a potential judgement, which I fear, that feeds into the darkness in my characters’ lives.” I’ve never heard an actor say that before, and I’ve interviewed plenty.

With every performance, however, Lucas is growing away from that kind of fear: “There are actors who don’t feel free in their lives until they step on stage or in front of a camera, and I think that’s a much healthier and more truthful way of seeing it,” he says. “It’s a disservice to the audience and to me if I go out there expecting that they’re going to judge me. They’re not there to see me, Lucas. They’re there to see the story.”

In the play, his character talks to the audience, and he’s leaning into that. “They are undeniably real and undeniably present, and they’re listening, so why not use that?” he says. “They can be a huge asset to my performance. But it’s only a tool if I accept that they are generous and loving. I can’t tell a story to 800 judgmental, mean people.”

Did I mention that Lucas is 22? Do you see why Peter wanted to protect him? So forgive me for letting dad have the last word.

“Most kids act,” Peter says. “Lucas inhabits. He did that early on. Now he’s marrying his innate, instinctual capacity to be compelling and human with an artist’s soul and an ache to challenge. Watching that is one of the great thrills of my life.” 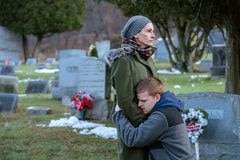