I first encountered Planet of the Apes in a way that might seem foreign to today's young audiences: while flipping across basic cable at 1 a.m. The appeal was immediate: Charlton Heston's untamed machismo, sure, but also the walking, talking, fightin' apes, sometimes riding atop horses and more frequently beating the tar out of any lowly human who got in their way. What gloriously cheesy world had I stumbled upon and why did no one tell me it had existed before? Damn you all to hell, as astronaut George Taylor might say.

It didn't take long to pick my way through the rest of the Apes franchise which, even by B-movie standards, is wildly prolific and mostly awful. Four progressively worse sequels to the original 1968 film, two go-nowhere television series, countless novelizations and comic books – the Apesverse is a weird sort of forebearer to Marvel's current cinematic machine, except, well, bad. Yet, beneath all the terrible acting (sorry, Ricardo Montalban), ill-conceived spinoffs and general cash-grab nature of the brand, I kept returning because of its primal lure: talking apes who took care of business. (Sometimes while riding horses.)

So it was with a mix of trepidation and giddy anticipation that I approached Fox's attempt at a refresh in 2011 (I'm deliberately ignoring the 2001 Tim Burton film, as with the rest of the world.) Did the cinematic landscape truly need more monkey business, and what would even be the point of refreshing an endeavour whose entire appeal rests in its ridiculousness? Somehow, though, director Rupert Wyatt found something new to say about the slim divide between man and beast with Rise of the Planet of the Apes, and even coaxed a great performance out of James Franco, no easy feat.

Most critically for Wyatt's reboot, special effects had finally blown past the limitations of simian cinema – no more goofy (though impressively goofy) makeup to punish Roddy McDowall. Now, an entire character could be created out of pixels and a goofy (though impressively goofy) motion-capture suit worn by Andy Serkis. The future is here and, with the new War for the Planet of the Apes, the presumed capper in Fox's trilogy, Serkis has invented an entirely new medium of performance – one that pushes the series into a realm that would have blown poor George Taylor's mind even more than a half-buried Lady Liberty.

War is directed by Matt Reeves, who took over for Wyatt with 2014's Dawn of the Planet of the Apes, and has brought a peculiar sensibility to the modern studio tent-pole. There are the obligatory set-pieces, too-frequent slices of comic relief and a swelling score by Michael Giacchino that risks drowning out any of the script's subtlety in a tsunami of strings. But Reeves prioritizes character above everything else, creating instantly relatable heroes and villains in record speed. Which is where Serkis and his wonderfully game co-stars come in.

As the chimpanzee leader Caesar, Serkis conjures an empathetic, deeply complex hero – a soul haunted by violence, but often forced to wallow in it for the sake of love, honour and family. To bring any such character to life without resorting to histrionics is a great endeavour. To do so via performance-capture technology, your facial expressions and body language hidden beneath vast reams of digital code, is quite another. Yet, with Reeves' quiet and cautious direction, a screenplay that favours emotion over explosions, and the next-level magic of Weta Digital, Serkis conceives a fresh art form right before our eyes. There isn't a single moment in War where Caesar does not seem real. It is a feat nothing short of miraculous.

If Serkis's performance was all War had going for it, that would be more than enough, especially in a summer movie season as dire as this. But Reeves crafts a compelling, unusual tale around his intangible star, a post-apocalyptic saga as dark as it is unexpected. It's two years after the events of Dawn, with Caesar and his tribe attempting to exist beyond the touch of humanity, which itself has been ravaged by a virus that's led to smarter, sharper chimps. But just as Caesar and his comrades (including the wise and compassionate orangutan Maurice, played with astonishing depth by Karin Konoval) settle down, along comes a man only known as The Colonel (Woody Harrelson), a military fanatic with more than a shade of Kurtz and Conrad. To survive The Colonel's agenda, Caesar gets caught in a twisty moral struggle, one with no clear answers for apes or humanity.

It may all sound like an especially depressing way to spend two hours, but it never feels oppressive in its bleakness. Reeves keeps the action moving steadily, never letting the film's 140 minutes feel even slightly bloated, and surrounds Caesar with a visually stunning, compassionately conceived group of side characters, from series staples Maurice and Rocket (Terry Notary) to new ally Bad Ape (Steve Zahn, going leaps beyond his recent live-action work) and the speechless little girl Nova (Amiah Miller) who they pick up along the way. (And thank goodness, they all ride horses.)

In 2011, Fox pushed to have Serkis nominated for a best supporting actor Academy Award for his work in Rise; it was a failure. If the Academy were to ignore him again for War … well, maybe the apes should just get on with it and take the planet over now.

Film Review
Dawn of the Planet of the Apes: A new standard for summer blockbusters
May 12, 2018 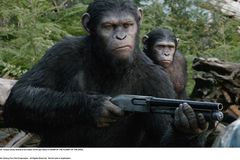 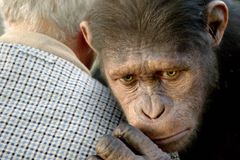 It's not all monkey business: an expert's take on Rise of the Planet of the Apes
May 3, 2018 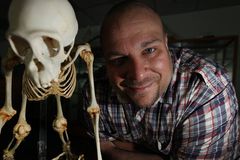