At 61, the Israeli-born music director of Ottawa's National Arts Centre has played - as a violinist and violist - and conducted much of the world's great classical music. And in 1985, he conducted the world premiere of Where the Wild Things Are, a 45-minute opera by Oliver Knussen based on Maurice Sendak's children's book, for Minnesota Opera. But the Opera Lyra staging of Mozart's The Magic Flute, which opened on Saturday at the NAC, is new territory for Zukerman.

"I've been involved periodically with the different elements of opera - never a whole opera," he said in a telephone interview from his home in Ottawa. "I've worked on the parts and I have it all in my bloodstream."

Zukerman insists that the shift to operatic work is simply an expansion of his usual work and that, "honestly, [the shift is]not hard at all."

Soprano Shannon Mercer, who is singing Pamina in a return to her hometown, agrees that he has made a smooth transition, but that it is an adjustment nonetheless.

"I think he would admit he's not used to the long hours and just sitting there during direction," she said.

"No one so far has come with this ego which one hears about all the time in opera. You know: This soprano came in and screamed her head off and said to the director, 'You're full of shit' - that's not happening here," he said.

He is helming a younger, nearly all-Canadian cast that includes Mercer, John Tessier as Tamino, Joshua Hopkins as Papageno, Luz del Alba as the Queen of the Night, Valerian Ruminski as Sarastro - and Arianna Zukerman, the conductor's daughter.

To an extent, he is a father figure to the whole cast. Opera Lyra is celebrating its 25th anniversary, but few of the show's singers are much older than that. "He has many, many years of experience on us, and he's not shy about sharing it with us," Arianna said. "So whether it's his daughter or his colleagues, he's very generous with his knowledge. But he's not afraid to ask questions."

And he has - of the cast, the company, and particularly director Tom Diamond, who is steering the group through the vivid but sparsely furnished David Hockney-designed production, which premiered at England's Glyndebourne Festival in 1978 and is now owned by San Francisco Opera.

"[Diamond]repeats things a million times, which is only good for everybody," Zukerman said.

Zukerman has brought some unorthodox techniques to this Magic Flute. He bought bottles of wine for the cast and surprised them with an easy evening in the rehearsal hall. He played a day of rehearsal on the piano rather than conducting. And from time to time he sends his daughter affectionate notes during the quieter moments of rehearsal.

"I send her little messages on my BlackBerry, like 'Hi!' And she gives me dirty looks."

Arianna, who is based in Washington, admits there has been some family tension, but it's not about the opera - it's over hockey. Her father is a rabid Ottawa Senators fan, while her husband works for the rival Washington Capitals.

"So there's minor holy war going on," she said with a laugh.

Zukerman, too, seems to be having fun with this Flute, and one gets the sense he is glad he waited until now for his operatic conducting debut. He's been offered jobs by New York City Opera and Welsh National Opera but turned them down when he couldn't negotiate the rehearsal schedule he felt he needed. Those constraints, combined with a busy international schedule that includes his obligations to the NAC and a post as resident conductor with the London Philharmonic, will likely keep him from making it a regular venture.

"It's always been an open-ended prospect for me. But scheduling is a big problem for me, I can tell you. I don't have three weeks to spend in a foreign place, let's say, and do the work that I've done so far here," he said.

Still, it seems opera is now in Zukerman's blood, and that he will not easily tear himself away from this engrossing medium.

"Opera is such a complete vehicle of expression for everyone," he said. "From the lighting person to the stage man to the chorus - everything. One just needs to be part of this extraordinary idiom."

The final performance of The Magic Flute at the National Arts Centre is Saturday at 8 p.m.. 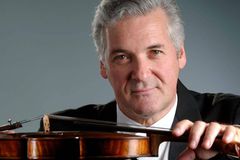 Follow James Bradshaw on Twitter @jembradshaw
Report an error Editorial code of conduct
Due to technical reasons, we have temporarily removed commenting from our articles. We hope to have this fixed soon. Thank you for your patience. If you are looking to give feedback on our new site, please send it along to feedback@globeandmail.com. If you want to write a letter to the editor, please forward to letters@globeandmail.com.
Comments