Like many traffic accidents, it began with the briefest moment of distraction. Hosting the 2017 Juno Awards last Sunday, comedian Russell Peters had just walked on stage and looked out at his audience. What he saw was a gaggle of enthusiastic young women pressed up against the catwalk where he stood. He paused as though this group required some comment and then limply offered a hoary old jail-bait joke: "That's a lot of young girls here. This is a felony waiting to happen."

By Monday, Minister of Canadian Heritage Mélanie Joly, also dubbed "hot" by Peters during the show, was calling his comments inappropriate. By Tuesday, the Canadian Academy of Recording Arts and Sciences, which was already saddled with its own #JunosSoMale controversy over its lack of female nominees, was publically apologizing and distancing itself from Peters in a press release.

But at first the throwaway line barely registered; the crowd kept cheering. Singer and co-host Bryan Adams joined Peters on stage; there were some scripted remarks about Michael Bublé, who was booked as host but is now staying home, nursing a child with cancer. Peters and Adams would take credit for anything you liked; anything that offended could be blamed on Bublé. Ha ha.

Nobody seemed to notice that Peters had already offended. It was only later – when Peters said he didn't know why Joly was there but didn't care because she was "hot" – that social media really lit up. Peters, a comic known for his ethnic parodies as well as the occasional raunchy aside, had definitely crossed a line.

You could speculate that CARAS president Allan Reid, despite his hasty disavowal of the "off-script remarks," should have seen this coming. Stand-up comics improvise; that's what they do. And Peters can be particularly off-colour in interactions with a live audience: His 2016 TV special Almost Famous includes a bit where, teasing one couple in the front rows, he mimics the man impregnating his wife from behind.

After a Junos debut that won him a Gemini in 2008, Peters last hosted the show in 2009, but perhaps this time he was ill-prepared for a last-minute gig and, a man from Brampton, Ont., now living in L.A., disconnected from both the young fans who snag tickets to see the live event and Prime Minister Justin Trudeau's "Because it's 2015" political atmosphere. Certainly, his quip about Joly, which might have passed as a legitimate joke at the expense of an aggressively photogenic politician if Peters were a political satirist, just felt painfully out of touch.

Dismissing with a sexist swipe the credentials of a minister whose department has supported the Canadian music industry since the 1970s isn't smart, but the other line was far yuckier. Peters is the father of a six-year-old daughter, yet his frat-boy rape joke suggests someone so cozy in a male world he has apparently never considered the perspective of a young woman.

Peters has made no public comment, but on Twitter he has liked a series of tweets from fans defending the jokes.

The timing for CARAS could not be worse, because for two years now its awards show has politely fended off a #JunosSoMale controversy led by critics who point out that most of the nominees are men. This year, there was only one female nominee in both the album-of-the-year and artist-of-the-year categories; men were in the heavy majority in most other categories except international album and, as usual, there were no women nominated as producer or engineer. Reid has responded strongly, encouraging women in the industry to join CARAS and pointing out that Juno voters have to choose from what is submitted to them. (In the technical categories, very few female names are submitted, while other categories have a sales component.)

Sure, art goes in cycles and if these powerful years in Canadian music belong to Drake and the Weeknd, most of us can remember when Alanis Morissette and Shania Twain ruled. Meanwhile, the industry knows it has a pipeline problem and is doing some work to get more women into the technical jobs that are often the first rung on a career ladder. Still, at the top of all this is a business that, like most of the entertainment industries, is run almost exclusively by men: Currently, CARAS has only one woman on a 13-member board packed with music-biz heavyweights.

With its reek of the locker room or the club house, Russell Peters's joke seemed to issue straight from that world. And that's too bad because the Junos do a lot of things right, making them justifiably popular with young fans, both female and male. The awards are preceded by a smartly programmed week of public events in rotating host cities, and the show itself, which routinely draws more than a million television viewers, can be counted on for strong performances from big names: This year it included Alessia Cara, A Tribe Called Red, Sarah McLachlan, Shawn Mendes and Feist. Trudeau's desire to be associated – he and Sophie Grégoire-Trudeau delivered a flowery tribute to the late Leonard Cohen – served as a reminder that it's the Junos themselves that are hot.

So, all the awards show needs next year is a new host. Lilly Singh, Sabrina Jalees, Catherine Reitman, Candy Palmater? Whoever she is, there's a job to be done. 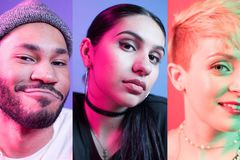