Before Shale Wagman stepped to the centre of one of the most legendary stages in the ballet world three weeks ago, he had never danced in a principal role. He had performed solos, trained for hours every day, competed in high-profile competitions. But he did not know what it felt like to star in a classical full-length, two-act ballet.

Now, on the historic Mariinsky stage in St. Petersburg, Russia, before an audience with extremely high standards and surrounded by a famous company, the dancer from Thornhill, Ont., was about to find out.

It was a defining moment in a very young career. Wagman, who turned 19 in May, was told he was the youngest person ever to appear as a guest principal with the Mariinsky Ballet, one of the most prestigious and demanding companies in the world. Its stage thrums with the energy of a long line of ballet greatness – Nijinsky, Nureyev and Baryshnikov all began their careers there.

Wagman has only just completed his first year as a professional dancer in the entry-level corps with the English National Ballet in London. He has now left the company and is considering the next steps. His unusual leap from the corps to the principal role of James in La Sylphide came at the invitation of the Mariinsky’s acting director, Yuri Fateev.

“I was bawling," he said of the moment he was offered the role. “He took a chance on me.”

Just a few years ago, such an achievement would have felt very far away. The first time he received a call to dance in Russia, he had to turn down the offer he had dreamed of – and could not be sure when the chance would come again.

Wagman’s path to ballet was unusual. Like many Canadian kids, he came from a hockey family – but he hated the sport.

On a whim, he auditioned at a dance studio where a friend took lessons. He was just six, but teacher Vladimir Novitski was immediately impressed by what he described as a feline quality to the boy’s movements – agile and fluid.

He began training in different genres and entering competitions. At 12, Shale was a finalist on the reality show Canada’s Got Talent. The next year, he met teacher Tatiana Stepanova and began ballet training.

It was a completely different discipline – his technique had to be honed, his muscles retrained, which is much easier while the body is still developing and is more plastic.

“Dance was the thing I was going to invest all my time in,” Wagman says. “I don’t know anything about being a normal kid, nor do I want to. I get so much more, emotionally, out of dance.”

After just six months of ballet, he reached the finals of the Youth America Grand Prix competition, at Lincoln Center in New York. He did not win, but the appearance led to scholarship offers. One of them was with the Bolshoi Ballet Academy in Moscow.

Ms. Stepanova herself had trained at the Bolshoi, in the famous Vaganova method pioneered by an eponymous Russian ballerina at the Mariinsky in the early 20th century. The method prioritizes soulful expression and strength, particularly in the upper body and core, which allows athletic movements to appear light and effortless.

“He was all for the Bolshoi,” recalls Shale’s mother, Heather Wagman. There was just one problem: It was 2014, and Russia had just invaded Ukraine. Their son was already moving far from home, and his parents decided that sending him to a country in the midst of such unrest was a step too far. He went instead to the Princess Grace Academy in Monaco.

During the nine-hour flight across the ocean, Shale was glued to his iPad, prodding his weeping mother to watch ballet videos, including a dancer he idolized named Olesya Novikova.

Wagman now realizes Monaco was the right choice: While the Bolshoi has prestige, the well-regarded academy has small classes, providing the individual attention and care he needed. Artistic director Luca Masala chose him to send to the Prix de Lausanne, one of the most prestigious competitions for young dancers. Winners often go on to fruitful careers, including choreographer Christopher Wheeldon, New York City Ballet principal dancer and choreographer Benjamin Millepied and Darcey Bussell, a former principal dancer with the Royal Ballet.

But at 15, Wagman’s training ground to a halt. With the growing strain on his body at such a young age, he developed a stress fracture in his fifth lumbar vertebra. His entry in the competition would be pushed back. Unable to dance, he had no emotional outlet while he was struggling to rest and recover.

“That was the lowest point,” he says.

He had to learn to analyze every muscle in order to execute movements correctly and to listen to his body’s signals. He believes the injury made him a better dancer.

But the setbacks have not been solely physical. He is hard on himself – a necessary trait for any high-level dancer, but taken too far it can hold people back. He loved to perform, but struggled with terrible nerves.

“I’m always the person to get off stage and say it was horrible,” he says. “Nothing was ever good enough.”

As his back recovered and last year’s competition approached, he was overcome with anxiety. Just a few days before he left Monaco, he was in the director’s office, the pressure bringing him to tears.

Masala told him he had to do his best – and the rest was out of his hands. If a Baryshnikov shows up, he said, you’re not going to win.

Wagman responded that he wanted to be the Baryshnikov in the group.

“With that mentality, I thought, well, definitely you already have your medal,” Masala recalls.

At 17, Wagman won the top prize – the first Canadian ever to do so.

“He has a very naturally expressive and fluid physique. It’s not just about how high his leg goes or how arched his feet are,” says Christopher Stowell, associate artistic director at the National Ballet of Canada, who was on the 2018 Prix de Lausanne jury. Physically powerful dancers are not always expressive, or vice versa, he says. “All the great dancers of the world have a combination of the two. … That ratio in him is very impressive.”

Wagman was once told that the emotive quality of his movement comes across as feminine – and weak. On the contrary, he sees the ability to tap into both his masculine and feminine sides as a strength, which allows him to access his emotions more deeply onstage. He says many male dancers feel pressure to counter stereotypes about their art form by appearing ultra-masculine, something he wants to resist over the course of his career.

The company had a sports psychologist who helped him work on his nerves and self-criticism.

“I’m a perfectionist. It’s my worst and best quality,” he says.

After the Prix, Yuri Fateev of the Mariinsky had begun following Wagman’s career. In the spring, he invited the young dancer to take a class there while he was at a ballet festival in St. Petersburg. Three weeks later, back in London, Wagman received an e-mail inviting him to dance on the historic stage, in the principal role.

In La Sylphide, James is a young man on the eve of his wedding who meets a sylph – a woodland spirit whose beauty opens his eyes to dreams of another world. At the first rehearsal with his sylph, his hands were shaking: Dancing the part was Olesya Novikova, the very same ballerina whose videos a young Shale had pored over, sitting beside his mother on the long plane ride leaving home behind.

Wagman had 13 days to prepare with coaches at the Mariinsky. Even with such a steep learning curve, when he stepped onstage he felt no nerves. It was not until after the multiple curtain calls, until after the audience had filtered out and he stood onstage to look at the empty theatre, that he had time to assess. Normally, this would have been the moment he began nitpicking the performance that was never good enough. But not now.

“It couldn’t have gone better,” he says. “It was the first time I felt that in a long time.”

Jet-lagged and sore, he was back home north of Toronto the week after the performance, fielding phone calls and exploring his options.

As he makes a name for himself around the world, many Canadians still have never heard of him. He has one suggestion.

“If you want to know who I am, watch me dance.” 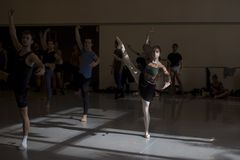 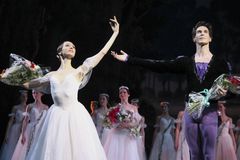 Montreal dancers show a ‘different perspective’ on love and intimacy 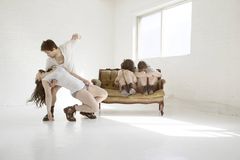 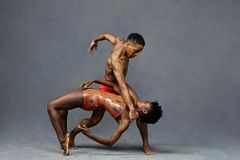