Rêve is an astonishing ballet – a riot of imagery, both visual and physical. It is a dance you want to see again immediately after watching it in order to come to grips with its immense imagination.

The ballet comes from the fertile mind of German choreographer Stephan Thoss, the artistic director of Wiesbaden Opera Ballet. Such was the success of Searching for Home (2008), which Thoss restaged for Les Grands Ballets Canadiens in 2011, that he was immediately invited back to create a full-length piece. What a smart move on the part of Les Grands artistic director Gradimir Pankov.

Since assuming the Wiesbaden post in 2007, Thoss has transformed that company from an also-ran classical troupe into one of the most dynamic contemporary ballet ensembles in Germany. The choreographer is also a polymath who designs his own sets and costumes.

Thoss's works are inspired by German expressionism and surrealism. They are sophisticated and, given their abstraction, definitely don't make for an easy evening at the theatre.

There is a scenario of sorts that Thoss tantalizingly describes in his program notes. A woman, The Dreamer (Eva Kolarova) is filled with wild imaginings about stories and people, but is afraid of them. She hides her writings in a desk drawer because she doesn't want people to mock her over their strangeness. (Apparently, Thoss was inspired by his own creative torment.)

Her alter ego, also called The Dreamer (Jérémy Galdeano), is the composite of her undeveloped characters and unfinished stories. He also delivers a cautionary tale, warning her of the dangers that these wild imaginings contain.

The structure of the ballet is simple. The Dreamers enact the woman's angst-filled insecurities before a black curtain. They then become still. The curtain goes up to reveal other dancers, who embody the manifestations of the women's incomplete characters and stories. The curtain then comes down and the two Dreamers continue their duet. Then the curtain rises again.

When the black curtain is down, grainy images are projected above the Dreamers. When it is up, the other wild dream sequences take place behind a scrim that mutes their colours. With each successive viewing, the dream characters become more frenzied and menacing.

At only one point in the ballet does the scrim go up. The stage is then bathed in vibrant light as the female Dreamer interacts with her dream characters, but the encounter is clearly so terrifying to her that it is never repeated.

The woman is finally so haunted by her own dreams that they become reflections of herself. She wears a pale blue dress and her imaginings are populated by women garbed in the same dress but in different colours.

In his scenario, Thoss introduces the dream characters as the Lamp Woman and the Mirror Man. Each loves the other, but is afraid to say so. The man then morphs into two Mirror Men and they take part in a frenetic trio with the Lamp Woman. This continues again and again, until the dream stage is awash in characters duplicating themselves as well as replicating the Dreamer.

While these visual images are important to Rêve, it is Thoss's choreographic language that takes one's breath away. That language is a cunning combination of suppleness and angularity. The dancers seem to move effortlessly from being boneless to being made of steel. Their movements are at once athletic, gymnastic, balletic and frantic.

If I have one cavil, it's that the black-curtain-up, black-curtain-down construction of Rêve does become formulaic over time. Nothing, however, can take away from the sheer power of the tormented Dreamers' duets before the curtain, and the manic dreams behind.

Place des Arts until May 25. 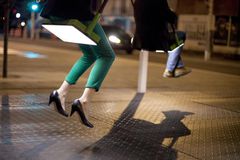 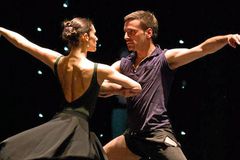 Marie Chouinard offers musings from ‘a strange yet friendly future’ 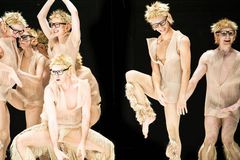