Arabella is a money story more than a love story, I realize halfway through Tim Albery's elegant production that opened at the Canadian Opera Company Thursday, and the last of the Strauss-Hofmannsthal creations reveals itself as an unexpectedly sombre enterprise.

Money is its core, and also an escape from a troubled family, as there is no other way to account for the heroine's decision to marry a rural landowner with a short temper and shifting moods and leave Vienna and everybody she knows for the countryside at the edge of the empire. Much is made in the libretto of the difference between the sophisticated but corrupt metropolis in decline and the moral simplicity of rural life, but Vienna to which the landowner from a far-flung province arrives to search for his bride is a rather civilized place where a woman can date three people at once, or live dressed as a man and date nobody. Once married off to the dark stranger, Arabella will be, as she herself sings in Act 2, obedient as a child.

Albery's approach is as directorially neutral as they come, with sets in grey, costumes largely white and black in fin-de-siècle tailoring (both by Tobias Hoheisel). He lets the libretto breathe, and lets Arabella be a conflicted story of a frantic search for The One amidst a family solvency crisis. The Waldners are a titled family trying to fend off debtors and marry off Arabella, the reluctant older daughter, when the wealthy but uncouth Count Mandryka of the South Slavic lands arrives. Arabella and Mandryka are not the most logical of matches as they differ in just about everything, and she is after sincerity (or is it his fortune?) while he is struck by her beauty (or is it the insider Viennese glamour he is after?), but they are certain they are meant to be. Arabella's younger sister, Zdenka, lives as a man as a money-saving measure, but also because she enjoys it – she will rather remain a boy, she tells her choosy sister right at the beginning, than be a woman like her: "proud, coquettish and cold."

Some resplendent music is given to the sisters in the intimate Act 1 – the conversations, Arabella's aria Er ist der Richtige für mich and the concluding monologue in which she considers whether to settle for Count Elemer, one of her other suitors. The strings are used to flirt with but promptly unsettle any outpouring of lyricism in Mein Elemer. If there is one certain thing, it's that the sisters love and protect one other. Zdenka is a peculiar character, gender-defying while also being highly sexual: She is in love with her pal Matteo, who is also one of Arabella's suitors, and lures him to Arabella's bedroom by pretending to be her. The resulting confusion – Mandryka has overheard something about another man getting hold of Arabella's bedroom key – almost wrecks Arabella's engagements to Mandryka. Almost. After an agonizing Act 3 argument among the principals which wakes up other hotel guests at an ungodly hour, matters get solved. Mandryka trusts Arabella again, she forgives him his distrust and Matteo seems to be finally taking interest in Zdenka.

It's Erin Wall who gives Arabella coherence and depth amid her contradictions. She is exquisitely melancholy in her first amorous duo with Mandryka in which she foresees the time when she will call him master. There are subtlest hints of regret in her individual farewells with the favourite Viennese suitors, and her request to Mandryka to have one more hour of dancing at the ball before she is his and his only. There is emphatically not to be any dancing with other men from then on. It's no coincidence that pure spring water works as an important symbol in the opera.

Jane Archibald is a sweet and more-boyish-than-masculine Zdenko. Archibald's voice, with its bright and secure high notes, easily soars above all the duos and group scenes. Both Wall and Archibald are apt operatic conversationalists in this, Konversationsstück genre and it's to their and Albery's credit that parts of Arabella feel like naturalist straight theatre. The COC orchestra under Patrick Lange is nimble in its tempos alongside the goings-on on stage, often sounding like a much lighter orchestra. It's well-balanced, brass well reined in.

Bass-baritone Tomasz Konieczny gives Mandryka the required rough edge and abruptness. His timbre is fairly bright for a baritone, while his vocal heft is Wagnerian, which makes Mandryka stand out from the Viennese crowd. I'm all in favour of South Slavs, imaginary or historical, appearing in Austrian and German opera and operetta, as I'm from that part of the world myself, but I just couldn't warm up to the man. He easily seduces the elder Waldners, however, with his plain talk and ostentatious spending. There is a darkly comic scene in Act 1 in which he literally opens his wallet for Count Waldner (excellent John Fanning) to help himself with whatever he needs to settle his gambling debt of the day. Strauss distances us from the ugliness of the situation with the cheery melody given to the returning line, "Teschek, bedien dich!" – "Help yourself!" – and by turning Waldner into an overall comic character, but the discomfort lingers on.

Strauss wants to repeat some of the success of Der Rosenkavalier, but those of us who are fans of Der Rosenkavalier will find it hard to love Arabella, a piece with less dazzling music and fewer dramatic layers. Strauss taunts us a little in Arabella's score, too, with Rosenkavalier motifs wiggling their way into the sisters' conversation about the roses, and those soaring moments when it sounds like one or both sopranos are about to take a turn into some version of the final trio of the Rosenkavalier. Still, there is much to appreciate about Arabella – its knowingness about the ways of the world and the female lot, and that sublime soprano music most of all.

Perfect escapism – the fashion and intrigue of The Collection
October 3, 2017 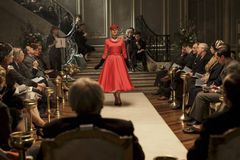 Film Review
Review: Annabelle: Creation is a horror film as lifeless as an old doll
August 11, 2017 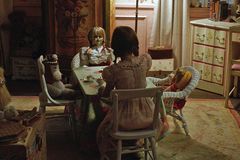 Review: An Octoroon is taboo ridden, but thoughtful
July 30, 2017
Follow us on Twitter @globeandmail Opens in a new window
Report an error Editorial code of conduct
Due to technical reasons, we have temporarily removed commenting from our articles. We hope to have this fixed soon. Thank you for your patience. If you are looking to give feedback on our new site, please send it along to feedback@globeandmail.com. If you want to write a letter to the editor, please forward to letters@globeandmail.com.
Comments