Rogers Communications Inc. surprised investors with fewer new customers across the board and weaker financials than expected in the first quarter.

Analysts were surprised when the Toronto-based telecom provider said Thursday that it brought in only 23,000 new contract wireless customers in the first three months of the year, compared with 95,000 this time last year and well short of estimates for about 70,000.

“Over all, it was a quiet first quarter for the industry,” chief executive Joe Natale said on a conference call Thursday, adding that promotional activity was down, with fewer deals offered on mobile data packages than usual, particularly in January and February. Without a flurry of promos, he said Rogers chose not to instigate any fights for new customers, instead focusing on “price discipline,” relying on higher prices to keep wireless revenue growing.

Rogers also shed more TV customers than expected and didn’t win as many internet subscribers as forecast in the period. The rocky start to the year came after the company reported a strong end to 2018 and restarted dividend increases in January. Rogers shares were down almost 3 per cent, or $2.04, closing at $68.90 on Thursday when the Toronto Stock Exchange’s S&P/TSX Composite index hit a historic high.

“We believe there is a potential threat to Rogers’ British Columbia market position as Freedom ramps up in the West and we suspect there could be additional risk to the wireless outlook as we get to late 2019,” Canaccord Genuity analyst Aravinda Galappatthige said.

Shaw Communications Inc.-owned regional rival Freedom Mobile, which operates in British Columbia, Alberta and Ontario and offers lower prices than the three national carriers, added 65,000 contract subscribers in the three months ended Feb. 28. But Mr. Natale insisted that one quarter does not make a trend and that Rogers has not given up fighting for the lower end of the market.

“We have no intention of yielding anything to anyone,” he said, noting that Rogers uses its main brand, as well as lower-priced Fido and discount brand Chatr to target different types of customers. “We’ve been competing with the likes of Freedom and others for about 10 years, and I think we’ve done a very good job of it as a company.”

In a later interview, Mr. Natale said the company’s wireless “fundamentals are all great,” adding, “We hit the best postpaid churn in the history of Rogers.” The company said the rate of customer turnover among contract subscribers fell to 0.99 per cent a month in the first quarter. Average billing a user (among both contract and prepaid customers) increased by 3 per cent to $64.62, bucking an industry trend of declining monthly revenues.

At its cable division, the company added 14,000 new internet subscribers (analysts forecast more than 20,000) and lost 28,000 television customers (worse than an expected loss in the range of 11,000).

“Having performed quite well through 2018 in the midst of Bell’s [fibre-to-the-home] rollout in Toronto, Q1 saw a notable softening in cable sub adds,” Mr. Galappatthige wrote, referencing competition from Rogers’s main rival for residential services, which has been investing in improving its network. He added, “In this backdrop, we will be watching Q2 and Q3 closely to assess the cable outlook.”

Rogers said overall revenue was down 1 per cent in the first quarter to $3.59-billion and profit fell by 8 per cent to $391-million. The company said that was largely because of baseball-related considerations at its media division, citing a tough comparison to the first quarter last year, when Major League Baseball paid the Toronto Blue Jays a large distribution related to the sale of a digital streaming company to Disney.

“On top of that, we took a one-time adjustment for player contracts as we rebuild the team. It’s not a recurring thing,” Mr. Natale said. The Blue Jays are still paying some players who are no longer with the team.

Still, analysts said the numbers were lower than expected. “Excluding last year’s payment by the MLB, revenue growth would have been flat, which is still significantly below the Street’s forecast of 2.4 per cent,” Desjardins Securities analyst Maher Yaghi said in a note to clients Thursday.

Rogers earned 76 cents a share in the first quarter, or 78 cents on an adjusted basis, coming up short of forecast estimates for 94 cents a share.

Last week, the federal government announced that Rogers invested $1.7-billion to win 52 licences for low-frequency wireless airwaves in a public spectrum auction. The company was the biggest spender in the auction, but Mr. Natale said he expects the investment will increase Rogers’s debt leverage by just 0.2 points (its ratio of debt to adjusted earnings before interest, taxes, depreciation and amortization stood at 2.7 times at the end of the first quarter).

Rogers said on Thursday it entered into a new, $2.2-billion credit facility at the end of the first quarter. ​ 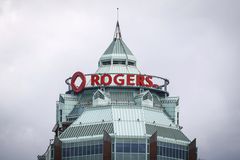 Rogers jumps back into dividend game, but ‘won’t be stuck in a cycle’ of annual increases Subscriber content
January 24, 2019 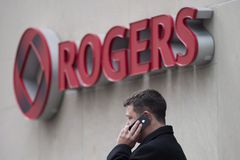 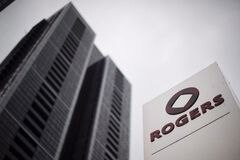