A protracted decline in European gas prices, which has hurt some energy firms but may prove a boon to buyers, has yet to find a floor as low summer demand could boost gas storage tanks close to chock-full amid soaring global supply.

British and Dutch prices, benchmarks for Europe-wide gas sales as well as some liquefied natural gas (LNG) markets, have lost half of their value since last September. They hit 10-year lows in June, weighed down by an influx of LNG and gas supplies from Russia, the United States and others.

Gas prices tend to fall during the summer but this year’s slump was uncharacteristic as it began in the winter months, when prices traditionally rise, and has been accompanied by a larger-than-normal buildup in inventories.

There is increasing concern European gas storage could hit “tank tops” by the end of summer, opening further downside to prices. Storage sites at some key hubs in the Netherlands and Austria are already more than 95 per cent full, Refinitiv data shows.

“We do not expect much of a recovery (in the third quarter of this year) as storage will continue to fill – indeed prices could trough again in late summer,” said Kim Fustier, oil and gas analyst at investment bank HSBC.

On Thursday, British and Dutch gas prices jumped, as they did at the start of July, in part because the market is positioning itself for the rollover of a new front month and the start of planned maintenance.

But while supplies will be reduced in August due to the planned outages, fears remain the cuts will not compensate for low summer demand and the start of two, if not three, new U.S. LNG export terminals.

“The market is structurally short, so when we have small changes in supply we tend to be a lot more jittery,” a gas trader said. “I think it will be a rough August in general.”

The long-awaited startup of U.S. LNG export plants and a ramp-up in Russia’s Arctic Yamal facility have made supplies abundant. Flows through pipelines from Gazprom have also risen as the Russian gas monopoly defends its market share against rivals such as Norway, supplier of a quarter of EU gas.

While Europe’s flexible, liberalized market has helped absorb flows, it has caused havoc in global price dynamics. LNG sold to Asian customers on the spot market has halved in value and U.S. LNG bought in long-term contracts and sold to Europe barely recoups the shipping costs.

“If Norway and Russia reduce their level of exports, this could stabilize the market to around 10 euros per megawatt hour,” said a second European gas trader, referring to the Dutch month-ahead price, at 11.68 euros on Thursday.

“If they keep exports at current levels, I think there is room for further downside, more like 7-8 euros/MWh,” he said.

Asian spot LNG on Thursday traded below $4 per million British thermal units for the first time in years.

Months of weak gas prices have hurt the bottom line of some gas suppliers such as Britain’s Centrica, which reported a near 50 per cent drop in operating profit for the first half of 2019, sending its shares to a 21-year low.

With the summer having limited impact on residential demand for gas, used primarily for heating, only sudden shortages can provide an upside to prices. Planned maintenance outages in August in Britain and Norway have been largely factored in.

Many industrial gas users are locked in long-term contracts with utilities and so will not necessarily benefit from lower prices.

But firms in the chemicals sector such as Norway’s Yara may gain as they use gas for feedstock, Morgan Stanley said. It sees European forward gas prices 26-33 per cent lower in 2020/2021 and Asian LNG prices losing 20-27 per cent.

“Yara is the largest European nitrogen fertilizer producer and could see tailwinds as gas is its key raw material in the production process,” the investment bank said.

In Britain, where gas accounts for 30 per cent of energy consumption compared to the European Union’s 22 per cent, consumers have been slow to feel the knock-on effect on retail prices of the 60 per cent fall in wholesale prices.

Britain’s energy market regulator Ofgem imposed a price cap under a commonly used tariff last year and is due to review it within a week, sources told Reuters.

But market experts expect the reduction to amount to 70-80 pounds a year for the 11 million households on the standard variable tariff, which is a roughly 6 per cent cut. The new price cap would come into force in October and cover the winter months. 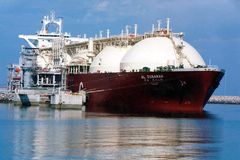