Canada is looking to the stars to help combat wildfires that researchers say are growing more intense and frequent as a result of climate change.

Wildfire officials already glean information from U.S. National Aeronautics and Space Administration satellites, as well as those of the U.S. National Oceanic and Atmospheric Administration and the European Space Agency. But none of those are tailored to Canadian needs, said Joshua Johnston, a fire research scientist with the CFS and the principal investigator for the Canadian effort, known as WildfireSAT.

Almost all of them capture images on early-morning passes, and there is a significant lag in data delivery. That’s a major limitation because wildfires don’t reach their peak intensity until late afternoon, providing important details about everything from smoke levels to how aggressively a fire might spread.

“You don’t get any sort of information about that at 10 in the morning. If you look at it in the late afternoon, that’s when the extreme fire behaviour is happening, and it’s the most important piece of intelligence,” he said. “That’s the time period when things go from ‘Okay, I think we got this’ to 'Uh-oh, it’s time to run.’”

The quest for close to real-time fire data comes as the growing frequency and intensity of wildfires across Canada tests suppression efforts, prompting a rethink about how best to deploy resources in regions seen as especially prone to disaster as temperatures edge up.

Wildfires have already forced evacuations in northwestern Alberta and central British Columbia this year, and federal officials are predicting a long, hot summer ahead. The Chuckegg Creek fire near High Level, Alta., has grown to more than 1,300 square kilometres and is the largest of six classified by the province as out of control as of Tuesday.

Wildfire scientists say climate change has increased the risk of extreme fires and led to earlier fire seasons in Canada, with the area burned each year more than doubling since the 1970s. Alberta has registered fewer wildfires this year so far than its five-year average, but they have chewed through 67 per cent more forest and land, provincial data show.

“Even if you think we’re managing fire effectively now, you do need to keep in mind that the game is going to change very quickly. So we have to prepare for what’s coming,” he said.

The WildfireSAT has been discussed for at least a decade as a concept, but is only gaining traction now owing partly to advances in satellite technology, he added. The CSA is set to award contracts next month for preliminary designs, with a target launch by 2025.

Generally, all satellites that measure fire energy look at the radiation emitted from the flames – effectively light that gets emitted from intense heat. The resulting data could provide critical information about a fire’s intensity – and whether it requires an immediate response – that is otherwise unavailable to crews on the ground.

“Intensity is really critical," said Mike Flannigan, a professor of wildland fire at the University of Alberta in Edmonton.

The Chuckegg Creek fire “is bigger than the city of Calgary, so the northwest corner could be quite active, the southeast corner not active. That’s the kind of detailed information you’ll get,” he said. "It’s very useful, perhaps very timely, for monitoring and in some places even detection for more remote areas.”

Northern Alberta wildfire continues to grow, but spreading away from High Level
May 29, 2019 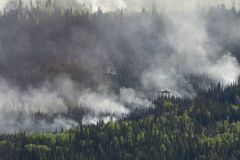 Warmer summer expected in the West spells bad news for forest fires
May 27, 2019 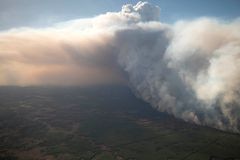 Weather conditions remain a concern for northern Alberta firefighters but crews keeping flames at bay
May 27, 2019 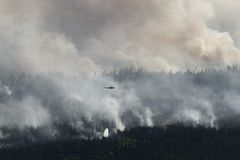