Jacques Raymond of Trois-Rivières signed up to serve in the Second World War at the age of 18. On D-Day, he was one of 14,000 Canadian troops who stormed the northern French coastline onto Juno Beach. Mr. Raymond came ashore with the Régiment de la Chaudière, a French-Canadian unit, and remained in Europe until Germany’s surrender in May, 1945. An infantryman, Mr. Raymond was honoured with the French Legion of Honour in 2014. He is a grandfather and great-grandfather who still enjoys golf and bowling. Mr. Raymond is 95.

He recounts his experience on D-Day.

We were squeezed next to one another in the landing craft. It was a little windy, and the sea was rough. But don’t ask how we felt. No one was talking. We just wanted to get there.

We knew the entire French coastline was a fortress. The Germans had been building it up for years. They’d gathered their troops and got inside their concrete bunkers and their machine gun nests along the beach.

The thing I remember the most was the deafening noise. Planes were flying overhead. Destroyers in the sea were firing above us. It was hell. The noise, the tension. We were trained to handle it, but you had to be there to know how dramatic and stressful it was. It took solid nerves.

D-Day confidential: How four Canadian soldiers made it through their longest day

We got out, into about a foot of water. We had to run and run like crazy because we wanted to reach the top of the beach. We succeeded. Others didn’t. In my regiment, we lost more than 100 men the first day. Some died on the beach. Some died in the landing craft as they tried to get out. There were 58 who floated, as they say. The Germans were firing everywhere.

Destiny can make you lucky. The guy next to you can get shot and you don’t. It’s chance.

The Germans wanted to throw us back into the sea – that was the expression. But they never could, because there were too many of us and we were too strong. When you think the Normandy landing was 150,000 Allied troops, it was something.

In all, I was [in Europe] for 11 months, from the day I landed in Normandy until the ceasefire in May, 1945. I feel good that I joined the side of those who wanted to go defend democracy. We were shown newsreels about the horrors, the way the Germans were killing civilians and setting fire to homes. We saw how Jews were being taken out of their homes at gunpoint and shot in the street. It motivated us.

I’ve been back to France in 2004 and 2015. I’ve seen the way people embrace us and say “Thank you” over and over. We gave them the chance to regain their freedom. Still, we think of our friends that we lost. I’m proud when everyone applauds us. I say to them, “You’re applauding for me, but those who never returned home, they’re still heroes.”

As told to Ingrid Peritz. 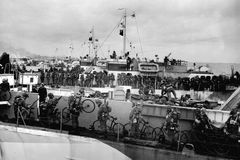 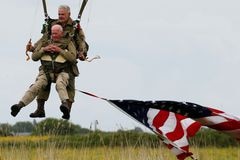 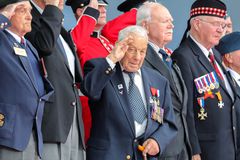 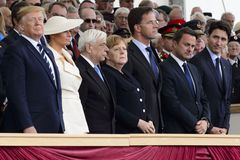