The Ontario Liberals are promising to stop auto-insurance companies from using the location of customers’ homes to calculate premiums, saying this will bring “immediate relief” for drivers.

The campaign promise on Thursday was another stab at the auto-insurance issue for the Grits − who fell short on their pledge in an earlier election to reduce rates by 15 per cent – and was quickly questioned by their political opponents and the industry.

An Insurance Bureau of Canada spokeswoman noted that location has been one of the government-set factors by which auto rates are determined. The likelihood of collisions, theft and fraud are assessed, in part, by postal codes, which can translate into substantial variation in rates depending on where people live.

“For each individual, these different factors would work in different ways,” Celyeste Power said. “Maybe [the Liberal proposal] helps someone in one postal code, but then those costs are picked up by someone in another postal code.”

Auto insurance is a hot political topic in Ontario, particularly for the populous belt around Toronto in which the majority of commuters drive to work. Thursday’s announcement was in Brampton, one of those communities, and was openly pitched at the so-called 905 region.

Ontario election guide: What you need to know before you vote

Harinder Malhi, the Liberal candidate for the riding of Brampton North, called the idea a matter of fairness.

“We will make sure that, early in our mandate, we find a solution so that drivers like yourselves, and myself, are not penalized because of where we live,” she said. “This is a plan that’s going to provide immediate relief to our drivers and … it’s going to make a positive difference for families right across the Peel region.”

The Liberals could not immediately provide projections for how many people might be affected by the policy change nor how much money they might save. According to Ms. Malhi, the specifics of how to enact this policy would have to wait until after the June 7 election.

“When re-elected, right after our mandate, we will look into it,” she said. “All options are on the table. We will be exploring options early in our mandate, hopefully within the first few months.”

The Liberals’ announcement capped a 24-hour period in which all three parties sought to portray themselves as friends of motorists.

Progressive Conservative Leader Doug Ford promised on Wednesday that his party would lower the gas tax as a way of making it cheaper to drive. And at a transit event on Thursday morning, New Democratic Party Leader Andrea Horwath said she could not accept road tolls because they would be unfair to poorer drivers.

In a statement later on Thursday, the NDP said the Liberal insurance announcement was an example of why “Ontarians feel cynical about politics,” stating that the Grits voted in 2012 against a private member’s bill that included a similar pledge about stopping insurers using geography as a basis for assessing premiums.

In their own statement, the Tories called the Liberals “untrustworthy” and criticized them for failing to meet their own goal of lowering insurance rates. The party agreed, though, that basing rates on location is unfair and pledged to “look at all options to make auto insurance more affordable for Ontario families.”

Allen Wynperle, a personal-injury litigator in Hamilton who is vice-president of the Ontario Trial Lawyers Association, said the Liberal proposal would be a step toward greater fairness, arguing that there are factors other than simply location that determine the likelihood of a vehicle being stolen. But he added that this is a small step given the bigger changes needed to make insurance fairer for Ontarians.

Ontario election guide: What you need to know before you vote

Ontario election guide: what you need to know before you vote 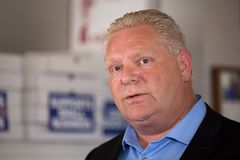 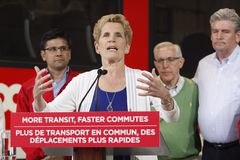 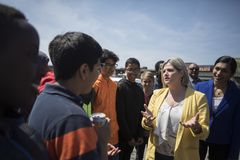 Follow Oliver Moore and Jacqueline Nelson on Twitter @moore_oliver @j2nelson
Report an error Editorial code of conduct
Due to technical reasons, we have temporarily removed commenting from our articles. We hope to have this fixed soon. Thank you for your patience. If you are looking to give feedback on our new site, please send it along to feedback@globeandmail.com. If you want to write a letter to the editor, please forward to letters@globeandmail.com.
Comments