The Ontario government is asking Ottawa to raise the number of economic immigrants in the province and to allow Ontario to exert “increased influence” over the amount.

The demands are part of a three-page list that Premier Doug Ford delivered to Prime Minister Justin Trudeau at their recent one-on-one meeting in Ottawa. The list also includes requests for increased transit and health-care funding, a pledge to work in tandem to counter Buy American policies and almost $800-million for infrastructure in the Ring of Fire region of Northern Ontario to support First Nations.

The list of demands was also discussed at the inaugural meeting this week of Mr. Ford’s council on provincial-federal relations, comprised of top ministers in the Progressive Conservative government. The ministers, including Finance Minister Rod Phillips, Health Minister Christine Elliott and Transportation Minister Caroline Mulroney, were told to engage with their federal counterparts to fulfill the demands, according to a senior Ontario government source. The source also said the ministers were given a target date of the Liberal government’s 2020 spring budget.

The source is not being identified because they were not authorized to speak publicly.

The list of demands focuses on 10 key areas, including infrastructure, health care and immigration.

On immigration, Ontario is looking to increase the number of economic immigrants, echoing a similar demand made after a Nov. 29 meeting between Mr. Ford and Quebec Premier François Legault.

The document says Ontario needs workers to fill its labour shortage and the Ontario Immigrant Nominee Program, which allows foreign workers and students to apply for a nomination for permanent residence, “is effective but oversubscribed.” The province is asking for the federal government to double the size of the province’s overall allocation, and to give it “more control” over the operation of the program.

Provincial officials say the federal government has allocated only 6,650 spots in the program, which allows Ontario to match its labour market needs with immigrants looking to come to the province.

Mathieu Genest, spokesman for federal Immigration Minister Marco Mendicino, said his minister has spoken to his provincial counterpart and taken a collaborative approach to developing immigration policy. He said the government is also increasing the numbers of spaces in its provincial immigration program to 27,000 but wouldn’t say how many Ontario would receive.

Mr. Ford’s government continues to ask that Ottawa increase its contribution to the $28.5-billion subway expansion plan for the Toronto area. The document also asks Ottawa to “streamline any federal requirements that may emerge,” such as permits or consultation.

The list repeats previous calls from the premiers to increase health-funding transfers to 5.2 per cent from its current 3 per cent. On pharmacare, the document says the Liberals “should work with the provinces and territories on finding solutions to the most pressing pharmaceutical issues,” such as expensive drugs for rare diseases.

Alex Lawrence, a spokesman for Deputy Prime Minister Chrystia Freeland, said Ottawa is committed to working collaboratively with Ontario and all the provinces and territories.

“The Prime Minister had a productive recent meeting with the Premier in Ottawa and we are open and keen to continue discussing how the federal, provincial, and territorial governments can tackle issues together,” he said. 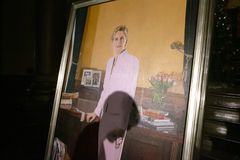 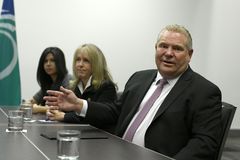 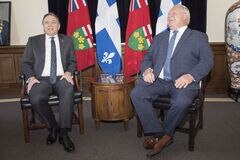