Ontario Premier Doug Ford was still listed as president of his family’s business on official U.S. documents filed in Chicago as recently as this week.

In an annual report submitted to the state of Illinois in July, Mr. Ford is named as the president and secretary of Deco Labels & Tags Ltd. The Toronto-based company, which manufactures labels and packaging for North American business, also has a division in Chicago.

The Premier’s office says the Chicago filing is a mistake and will be addressed.

“Our understanding is this was an error made by an accountant,” said Ivana Yelich, Mr. Ford’s press secretary. “We have advised the Premier’s legal counsel and it will be dealt with accordingly. Everything is in compliance with the law.”

Late Wednesday, the Premier’s office sent The Globe an amended corporate filing from Chicago that removes Mr. Ford’s name as president and secretary and replaces him with his spouse, Karla Ford. The form is dated Nov. 19.

It was not immediately known when the change formally takes effect in the state.

Ontario’s Members’ Integrity Act prohibits members of cabinet, including the Premier, from having outside employment and holding an office or directorship at a company. After The Globe and Mail made inquiries about the U.S. document, Ms. Yelich said Integrity Commissioner J. David Wake has been advised of the erroneous filing.

Mr. Ford’s office produced a resignation letter addressed to Deco Labels & Tags signed by Mr. Ford on Aug. 28, 2018. “The undersigned hereby resigns as director, President and Chairman of the Corporation, which resignation shall be effective forthwith,” it says.

The one-page annual report was filed with the Secretary of State of Illinois on July 15, 2019. It was authorized by Jim Rosone, Deco Chicago’s accounting manager, who “under the penalty of perjury” attests that the information is correct “to the best of my knowledge.”

In a brief interview earlier this week, Mr. Rosone said he would look into the matter, but said he could not comment further. He did not return subsequent voicemail messages.

In addition to naming Mr. Ford as president and secretary, the document lists Mr. Ford’s wife as director, providing the same address for both in Etobicoke, in the west end of Toronto. The company’s filing was updated from the previous year, when Mr. Ford was listed as president, secretary and director.

Gregory Levine, a lawyer and government ethics expert, said Ontario’s integrity law bans members of cabinet from being involved in businesses in an attempt to ensure they do not get entangled in conflicts of interest.

“You’re trying to head off a conflict,” he said. “It’s saying you should avoid a conflict situation in order to avoid allowing … the potential that a conflict will be inappropriately acted on.”

When Mr. Ford became leader of the Progressive Conservative Party in March, 2018, he declared his business interests in Deco with the office of the Integrity Commissioner. In updated filings after the June 7, 2018, election, Mr. Ford did not declare any roles with the company and said he created a management trust for his assets on Aug. 28, 2018.

A spokeswoman for the Integrity Commissioner declined to comment on Mr. Ford being listed as president of Deco in Chicago. Michelle Renaud said Mr. Ford’s management trust and trustee were approved by Mr. Wake.

“The Integrity Commissioner is currently meeting with every member, including the Premier, to review and discuss their own 2019 private disclosure statements. Through this process, the Commissioner ensures that each MPP’s financial holdings are in compliance with the relevant sections of the Act," she said.

The Premier’s office said his management trust is being managed by Royal Trust.

Mr. Ford also listed his wife and four daughters as directors of Deco in federal documents filed under the Canada Business Corporation Act on Aug. 28, 2018. The company changed its name to Deco Flexible Packaging Ltd. on Aug. 9, 2019.

Deco was co-founded in 1962 by Mr. Ford’s father. By 1995, Mr. Ford was essentially running Deco, although he would not officially become president until about 2002. He launched the Chicago branch in 1999.

A court action filed in June, 2018, by Renata Ford, the widow of Mr. Ford’s brother, Rob Ford, said another brother, Randy Ford, owns Deco Toronto. The document said that by 2017, Doug Ford became the sole owner of Deco Chicago. Randy Ford did not respond to requests for comment.

With a report from Stephanie Chambers

Editor’s note: After publication, the Premier’s office sent The Globe an amended corporate filing from Chicago that removes Mr. Ford’s name as president and secretary and replaces him with his spouse, Karla Ford 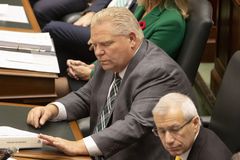 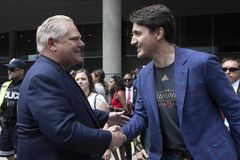 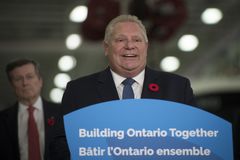