A looming shortage of a crucial drug for the treatment and prevention of tuberculosis has physicians across Canada rationing pills and warning of serious public-health consequences if supplies of the antibiotic run out.

Both of the pharmaceutical companies that sell rifampin in Canada are currently reporting shortages, with one of the drug makers, Sanofi Canada, warning that manufacturing delays could prevent it from restocking rifampin until next April.

“Rifampin is the backbone: It’s the most important drug in the treatment of active tuberculosis,” said Kamran Khan, a physician-scientist who treats tuberculosis (TB) at two Toronto hospitals.

“If rifampin isn’t there, the treatment becomes far more complicated … you have to start dipping into what we call second-line drugs, which can have really serious toxicities like permanent hearing loss and kidney damage.”

Although Canada has one of the lowest rates of TB in the world, the infectious disease is still a major concern for immigrants from countries where TB is widespread, and for residents of some poverty-stricken First Nations communities, especially in Nunavut.

TB rates are nearly 300 times higher among the Inuit than among non-Indigenous people born in Canada, according to the Public Health Agency of Canada (PHAC.)

PHAC recorded 1,796 cases of active TB in 2017, the most recent year for which figures are available. That is up slightly from 1,750 the year before.

In the battle against TB, rifampin is used in two ways. It is the cornerstone of a four-drug regimen for the treatment of active TB, a contagious and sometimes lethal disease marked by bloody coughing, deep fatigue, fever and other symptoms.

Rifampin is also becoming more popular as a way to prevent latent TB – a bacterial infection that has no symptoms and is not contagious – from sprouting into active TB disease.

A major international study led by the Research Institute of the McGill University Health Centre and published in the New England Journal of Medicine (NEJM) last summer found that four months of preventative treatment with rifampin worked just as well and had fewer side effects than nine months of treatment with the old standard, an antibiotic called isoniazid.

Now, with rifampin supplies dwindling, Canadians with dormant TB infection could be stuck with the longer, riskier regimen – and that makes it harder for marginalized TB patients to complete their full course of preventative treatment, which helps to control the spread of TB.

“I think if someone is on rifampin for preventative therapy and cannot get their refills and has to stop in the middle of treatment, I don’t want to be dramatic, but that’s [breaking] a covenant we made with the patient,” said Ryan Cooper, an infectious-diseases specialist at the Royal Alexandra Hospital in Edmonton.

According to the federal government’s drug shortages website, Sanofi Canada ran out of the 150-milligram version of rifampin at its Kirkland, Que., warehouse at the end of June.

Beset by an unspecified “manufacturing delay,” the company expects to run out of the 300-milligram version by July 15.

However, a Sanofi spokeswoman said by e-mail that rifampin may still be available at other points in the distribution chain, and that the company is limiting sales in co-operation with public-health agencies to ensure the pills are saved for patients who need them most.

Bausch Health Canada, the other company that sells rifampin in this country, said its shortage was caused by an unexpected spike in demand following warnings of the Sanofi shortage.

Bausch Health, formerly known as Valeant, is expecting its 300-milligram version to be back in stock by the middle of next month. In the meantime, Bausch is closely monitoring supplies of a 150-milligram version that is in short supply, but still available, and vowing that no patients will go without the rifampin they need.

Drug shortages are a chronic problem in Canada, with 1,880 shortages currently listed on the government’s site.

Dick Menzies, a respirologist at McGill University Health Centre and leader of the NEJM study on rifampin for TB prevention, said the federal and provincial governments need to find a way to guarantee the availability of crucial public-health drugs such as rifampin.

“Private mechanisms have repeatedly failed us,” Dr. Menzies said. “I don’t criticize private companies: You can’t make much money when there’s [approximately] 1,500 people across Canada with the disease. But I think the governments simply need to recognize that this is an important problem and find a mechanism that we can access.” Trudeau to apologize for federal mistreatment of Inuit during tuberculosis epidemics Opinion
The moral and economic case for action to end tuberculosis 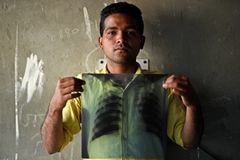