For most of her 15-year career with the Ottawa Art Gallery, Jennifer Gilliland cared for two dying parents. Her employer let her come in for her shift later, leave earlier and take some time off without docking her pay. The day doctors said her mother’s condition was terminal, Ms. Gilliland was scheduled to return to work to write a grant. Colleagues took over so she could go home.

“They have been very supportive and that is why I stay,” said Ms. Gilliland, who is the gallery’s collections and building manager. “You can be open and honest. You can say, ‘I can’t do it today.’ If you have a difficult mental day and got bad news, you can take the day off and not feel guilty. Your colleagues are there.”

“This happens in everybody’s lives,” said Alexandra Badzak, the gallery’s director and chief executive. “Our employees put their heart and soul into this space. When it comes to these trying moments, we need to have a heart and soul.”

The gallery joins a handful of other employers across the country beginning to embrace cultural change around caregiving by providing family care days, job-protected leave, virtual workshops and referral services, among other supports. These workplaces represent a paradigm shift: They recognize that eldercare can seriously disrupt people’s day jobs and contribute to productivity loss if not addressed head on.

Some six million Canadians – or about 35 per cent of the country’s work force – are balancing their careers with caregiving duties, according to a 2015 report from the federal government. Many are struggling to do both: Forty three per cent of employees arrived to work late or had to leave early, 15 per cent slashed their weekly hours and 10 per cent passed up a promotion or new job, according to the latest data available from Statistics Canada.

In depth: With a looming aging crisis, who is helping the caregivers?

Women’s careers are the hardest hit: Women are 73 per cent more likely than men to permanently leave work to care for an aging relative, according to an April study in The Journals of Gerontology from the Institute for Work & Health, a Toronto not-for-profit research organization. Some 8.5 million work hours were lost in 2015 as Canadians over the age of 40 contended with eldercare while managing their day jobs, according to the study authors, who scanned Statscan labour-force surveys.

“Caregiving undermines the ability of employees to perform their best work,” wrote the authors of a January Harvard Business School report titled “The Caring Company,” that examined how employers can help their staff manage their informal family-caring responsibilities. Such employees are often distracted at the office because they’re also organizing medical appointments and worrying about what emergencies may be unfolding at home – the “cloud of caregiving,” report co-author Manjari Raman said.

While some companies are starting to help employees balance the second full-time job of family care, experts urge that more workplaces need to step up, acknowledge the issue and plan ahead, instead of penalizing staffers who are quietly doing eldercare. This is especially urgent now, experts say, given the dire, mounting realities of Canada’s aging population.

“Employers are still largely unaware of this as a significant issue and liability. If we don’t start tackling it soon, we could have a significant economic productivity issue on our hands,” said Samir Sinha, director of geriatrics at Toronto’s Sinai Health System and the University Health Network.

Dr. Sinha makes a habit of asking the family members who accompany elderly patients to his office how they are doing. One woman who came in with her dementia-suffering mother burst into tears: four hours earlier, she’d been fired from her job as a bus driver for running through a stop sign. The woman was distracted and exhausted from looking after her mother, who roamed at night.

“The situation you’re in is often invisible until it creates workplace problems,” Dr. Sinha said. “Unfortunately, that’s usually when people reveal [to employers] that they’re a caregiver.”

The problem, encapsulated, is this, he said: “I can’t balance my secret job with my actual job.”

Dr. Sinha wants caregiving employees to be able to approach bosses before a crisis hits, and not be viewed as weak.

Career dreams “faded away” as Janet Dunnett and her twin sister Judy spent a decade caring for their ailing and divorced parents, who lived at opposite ends of Calgary. Their mother’s health deteriorated with multiple complex conditions: spinal stenosis, diabetes, cancer and heart and lung issues. Their father had dementia and cancer. There were specialist appointments, grocery-shopping errands, blown light bulbs to fix and dinners to ferry to lonely, sick parents.

“It was a game of whack-a-mole,” said Ms. Dunnett, Vancouver Island-based author of The Dwindling: A Daughter’s Caregiving Journey to the Edge of Life.

The women were in their 50s and at the peak of their working lives – Ms. Dunnett in government policy and her sister in strategic communications consulting. The non-stop caregiving derailed their career trajectories.

“I had plans to set myself up and spend many more years in consulting but that didn’t happen that way because the need-creep started,” Ms. Dunnett said. “It was impossible.”

A 2018 report from the National Institute on Ageing titled, “Why Canada Needs to Better Care for its Working Caregivers” urged governments and workplaces alike to face the grey tsunami heading their way and help employees doing double duty as caregivers. As lead author, Dr. Sinha recommended workplace leadership to set the tone on caregiving, human-resources departments to develop written policies and employers to inform staff that these kinds of supports exist. Dr. Sinha and his fellow authors also pushed for flexible work environments and employee benefits.

The Harvard study found that few employees were willing to tell their bosses they were juggling caregiving for fear it would harm their career prospects. Ms. Raman stressed that culture change needs to flow from the top: employers need to acknowledge that they’ve been informal family caregivers too, in order for their caregiving employees to grow comfortable speaking up and getting help.

“Employers have parents. They live through this. It’s generation after generation of employers doing the wrong thing,” said Ms. Raman, who is program director of the Harvard Business School’s project on managing the future of work. “Rather than hiding and skulking in large numbers, it’s far more efficient to bring this out in the open and develop a plan for it.”

Short-sighted employers who ignore this growing issue do so at their peril, Ms. Raman and other experts say. Many of those who abandon their careers to caregive are highly experienced employees a few years shy of retiring. When they bow out early, companies are forced to retrain for their high-level positions, a cycle that’s costly and time-consuming.

Staffers who leave late-stage careers hinder their prospects for future employment and take a hit to their retirement savings. Those who tough out their double duties can get overwhelmed, suffer burnout and get sick themselves.

“These costs are avoidable,” said Janet Fast, a University of Alberta professor in human ecology who has been researching family caregiving for 25 years. “If you provide supports, flexibility and services in the workplace, you’re going to reduce absenteeism, distraction and turnover and it all becomes more sustainable.”

Beyond the workplace, some government assistance exists for those taking on family care. Last year, Ontario, Nova Scotia and Prince Edward Island extended the duration of unpaid, job-protected leave plans for employees doing compassionate care, while Quebec delineated such a leave. Today, All provinces offer up to 27 or 28 weeks of unpaid leave in a year to caregivers tending to gravely ill or dying relatives, or to people they consider family. Ontario also grants up to eight weeks and Quebec and Nova Scotia up to 16 weeks of uncompensated leave to those caring for loved ones who are seriously ill or injured but not at imminent risk of death.

Federally, some employment insurance benefits are available. Eligible caregivers who are away from work to help family members at the end of their lives are entitled to up to 26 weeks of benefits. Those nursing adult relatives who are critically ill or injured can apply for up to 15 weeks of funds. The federal government also offers a non-refundable tax credit to family caregivers.

Even with such benefits and leaves, caregivers such as Ms. Gilliland said supportive, flexible workplaces remain critical. Eldercare is often highly unpredictable and can span months or years. Ms. Gilliland said she couldn’t afford to go on leave and survive off the federal caregiving benefits, which get capped at $562 a week.

“We can’t live off of that,” Ms. Gilliland said. “You don’t know how long they’re going to be sick.”

Opinion
Who will care for Canada’s caregivers? 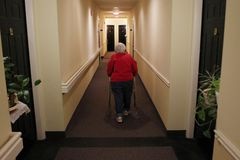 With a looming aging crisis, who is helping the caregivers? 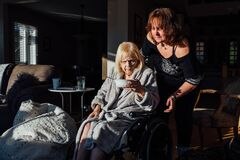 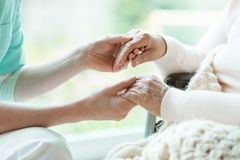