A Vancouver shipyard delivered the first of the Canadian Coast Guard’s three new science vessels last week by cannibalizing parts from one of the other ships for repairs, new documents show.

The repairs by Seaspan Shipyards followed the CCGS Sir John Franklin’s collision with the Ogden Point breakwater near Victoria in March, which damaged its rudder and main propeller shaft.

The vessel, which will be used by federal scientists to conduct research on fish stocks, was returning from its first day of sea trials when the collision occurred and there were fears the incident would further delay its delivery.

The coast guard was to take ownership of the vessel in 2017 but that was before welding defects were discovered, forcing it back in for more work.

The three science vessels together are to cost $687-million.

Internal e-mails obtained by The Canadian Press through access-to-information law show senior coast guard officials scrambling for answers after the collision, whose cause still has not been revealed.

Pictures taken by a bystander and circulated by Canadian Coast Guard commissioner Jeffery Hutchsinson, deputy commissioner Andy Smith and others showed a large dent in the Franklin.

A few weeks later, Mr. Smith e-mailed Hutchinson and Timothy Sargent, the top bureaucrat in the federal Fisheries Department, with an update that the Franklin’s rudder and propeller shaft were “twisted.”

As a solution, Seaspan planned to use parts from the third science vessel, the CCGS John Cabot, to fix the Franklin and get it back in the water, Smith reported.

“Ship 3 will be the donor patient to get Franklin to sea in immediate term,” Mr. Smith wrote. “Will have to source replacement parts for ship 3 in due course.”

Seaspan Shipyards officially handed the Franklin over to the coast guard in a ceremony on June 27 that included Fisheries Minister Jonathan Wilkinson and dozens of coast guard and industry officials.

It is the first vessel delivered under the federal government’s multibillion-dollar shipbuilding plan, which was launched in 2011.

The government has said it expects to receive the second and third offshore fisheries science vessels, the CCGS Capt. Jacques Cartier and the Cabot, in late 2019 and summer 2020, respectively.

Seaspan has also been tapped to build the navy’s two new support ships as well as 16 “multipurpose vessels” for the coast guard. Construction is largely sequential, meaning a delay in the fisheries vessels could affect the rest.

Seaspan spokesman James Mitchell said the decision to use parts from the Cabot to fix the Franklin would not delay delivery of the third vessel, saying it would be handed over “as per the agreed schedule and contract requirements.”

Mitchell did not say how Seaspan plans to replace the rudder and propeller shaft, but coast guard spokesman Benoit Mayrand said there were “no financial implications” for the government.

Taking existing parts from the Cabot helps explain the surprisingly quick repairs on the Franklin, said Timothy Choi, an expert on shipbuilding at the University of Calgary’s Centre for Military, Security and Strategic Studies.

“One of the things that would be interesting to know would be just how damaged the original shaft and posts were,” he added in an e-mail. “Could they still be repaired?”

Either way, Mr. Choi said the rudder and propeller are often some of the last parts installed on a vessel’s stern section and, because they are vulnerable to damage over a ship’s lifespan, are generally easier to remove and reinstall. 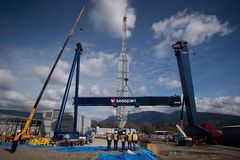