Toronto city staff are calling for mandatory safety training for people who drive for ride-hailing companies such as Uber, a recommendation that comes amid massive growth in the use of these services.

In a long-awaited report laying out dozens of ways the current vehicle-for-hire bylaw should be updated, staff are also urging that a fee be levied on for-hire drivers to help subsidize accessibility and that cabbies no longer be required to use low-emission vehicles.

The report comes about four years after Uber began to establish a significant presence in the city. The ride-hailing industry’s local popularity growth has surged in the years since. In March of this year, 176,000 trips were taken daily in such vehicles.

Implementing mandatory training for ride-hailing drivers, a change that would have to be approved by city council, would mark a reversal for Toronto. In 2016, the city sought to level the playing field by scrapping a 17-day training course for all vehicle-for-hire drivers.

A spokesman for Uber Canada would not comment specifically on the possibility people driving for the firm would require safety training.

“We look forward to going through the Vehicles-For-Hire staff report released by the City of Toronto and thank them for the work they have put into it,” Josh McConnell said in an e-mailed statement. “We will have more to say in the coming days.”

The recommendation for driver training did not specify how much time it should take but offered a list of preliminary subject matter, including safety, urban driving, accessibility, anti-racism and legal requirements.

Cheryl Hawkes, whose son was killed in a collision while riding in an Uber in downtown Toronto, called the training recommendation a positive development, but warned that the course will have to be rigorous.

“I just think it’s great that they’ve so strongly endorsed the idea of training … it will be the makeup of that course that will really be the proof,” she said. “It’s not going to bring my son back but it’s a good start.”

Kristine Hubbard, operations manager for Beck Taxi, the city’s biggest brokerage, was critical of many aspects of the report – saying it was a missed opportunity to cap the number of ride-hailing drivers and questioning the decision to eliminate the low-emission requirement – but she called the accessibility recommendation long overdue.

“The whole industry should be participating in making sure that it’s an accessible one,” she said. “And whether or not you’re the person who owns or drives that vehicle, everybody should be contributing to making sure that we’re offering an equitable service.”

The report also offers fresh data on the popularity of ride-hailing services – the use of which has grown 180 per cent in the past 2.5 years – and reveals new details on how and where they are being used.

The majority of trips with ride-hailing companies are within the old cities of Toronto and East York, the report shows. According to surveying done by the University of Toronto for the city, nearly half of people taking such a ride would have opted for transit instead had ride-hailing not been available.

Half of the trips in the downtown core were under six kilometres, which staff note is a distance that could be done by foot or bicycle. “However for these trips, [ride-hailing companies] were chosen based on other factors such as time, convenience, safety and comfort,” the report states.

In spite of the massive growth in ride-hailing, there has not been the increase in traffic congestion predicted by critics of ride-hailing. A city analysis concluded that changes to travel times in the downtown core over the past 18 months are within normal fluctuations. During the same period the number of ride-hailing trips in that area rose by 96 per cent. 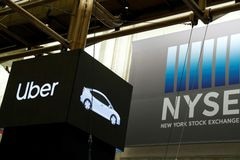 Response to Uber’s IPO reveals a trend at play in tech investing Subscriber content
May 15, 2019 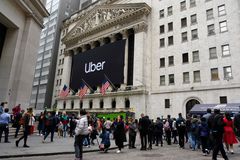 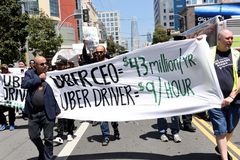