It’s the constant dilemma for buyers who want a capable and proven SUV, with the fabled reliability and resale values of both Toyota and Honda. The two are equally sensible choices for sensible people, after all, with hardly any risk involved in either. Both are designed to do pretty much the same thing, by Japanese engineers with years of experience. They both cost about the same, too, although they offer different options in their trim packages. And both are built in Canada, where the Toyota outsells the Honda, but in the United States, the Honda outsells the Toyota. So which is for you?

TOYOTA: You know what it looks like: There are hundreds of thousands of RAV4s on the road, covering four generations since its introduction here in 1995. Back then, it was a stubby little thing, but it’s grown with each generation, offering more space inside and more advanced technology. It finally copied Honda’s rear cargo door with the current generation, in 2013, moving the spare wheel to under the floor and hinging the door at the top instead of the side. There are nine trim levels available, including hybrid versions, but all look pretty much the same. However, the all-new fifth generation, to go on sale this December, will have three choices of appearance: regular, rugged or sporty.

HONDA: You know this one, too, and you’ve often mixed it up for the Toyota. It also started small when it debuted here in 1997, and it, too, has grown with each generation, but it’s been in its fifth iteration for a year already. To some, it looks a little sleeker than the RAV4, thanks to its (now) shallower headlights and slightly lower roof. But both vehicles have the same split front grilles, a taller ride that allows easier access and exit into the seats, and large rear cargo doors.

TOYOTA: The RAV4 has the lead here in my book, because it still has tactile buttons and knobs for common features instead of burying them in the central touch display screen. Want to change the volume on the radio? Turn the knob on the centre dash. Want to change the station? Turn the other knob, just like the good old days. You can do all this by voice control once the computer recognizes your accent, and you can use the steering-wheel controls, but the knobs are still there and easy to use with gloves. All but the base model include a heated steering wheel as standard, though, so you won’t need gloves.

HONDA: The CR-V’s controls can be frustrating because so many are now found only through the central touch display screen. For example, let’s say yesterday was a hot day and the air-conditioning was on, but this morning, it’s cold: When you get in the CR-V and start the engine, the air-conditioning will blast away, and you must press the climate button to bring up the controls on the screen. You can then adjust the temperature and the fan, provided you’re not in a hurry and have not already put the transmission in reverse, which brings up the rear-view camera on the screen instead of the controls. You get the idea. It’s a multistage process instead of a simple, mechanical adjustment.

TOYOTA: I still miss the power of the old V-6 RAV4 (actually, I don’t really because my wife owns one), but the 2.5-litre RAV4 powertrain is designed for economy and reliability. If you want to tow a boat, upgrade to the bigger engine of a Highlander. It’s not an exciting or particularly fun drive, and even less so for the hybrid, but it gets you there with no fuss. And in the winter, with good winter tires and AWD, the RAV4 is unstoppable.

HONDA: Also underwhelming, the CR-V has a significantly smaller engine for better fuel economy, but it’s turbocharged to bring it up to the equivalent of the RAV4. There’ll be no corner-carving in this little truck, but you will benefit from improved fuel consumption compared to the RAV4: it’s almost 20 per cent better than the conventional Toyota, though still not a patch on the more expensive Toyota hybrid. And it’s also well-equipped for winter with decent tires and AWD.

TOYOTA: There’s an impressive amount of technology in the RAV4 – this is Toyota’s bestselling vehicle, after all, and the company wants to make sure as many owners experience it as possible. Almost all of the safety and driver’s assistance technology is available from the base model up, and this includes active cruise control (above 40 km/h), precollision warning with pedestrian detection and lane-departure alert with steering assistance. You have to go up a level to get blind-spot detection and rear cross-traffic alert. There is no Apple CarPlay or Android Auto for better connectivity with your smartphone, but the Avalon now includes Apple CarPlay, so you can be sure it’s coming in the next generation.

HONDA: For all the impressive gadgets in the Toyota, the Honda’s tech is better. It includes everything the RAV4 offers (although sometimes, it’s not available on the base FWD model), plus Apple CarPlay and Android Auto to keep your phone out of your hands. It also has an active cruise system that follows the vehicle in front and lets the CR-V come to a complete stop in traffic – you can resume the drive with a tap on the throttle – as well as Honda’s Lane Watch system that points a camera into the blind spot on the passenger side, and shows the image whenever you activate the right-side indicator. This is really only good for watching for cyclists in the city, but for that, it’s great.

TOYOTA and HONDA: There’s really not much between the two, though the Honda has a little more cargo capacity: The CR-V offers 1,100 litres behind the rear seats and 2,146 when those seats are flat, compared with the RAV4’s 1,087 and 2,078 litres, respectively. The hybrid is even less, at 1,008 and 1,999 litres. Both are easy to load with luggage, although both are also fairly high for dogs to jump into and from. For passengers, there’s a bit more room in the front of the Toyota and a bit more room in the rear seats of the Honda, but chances are you won’t notice unless you’re studying the spec sheets.

Tried and true, the RAV4 is a dependable SUV that will hold its value well and give years of comfortable, capable service. It’s also the only compact SUV that offers a hybrid alternative, and when the fifth generation is introduced late this year, that hybrid will be marketed as the sporty model. But for now, it comes up a little short against the more recently updated Honda.

The winner on paper, the Honda generally offers a little more with all the choices that matter – it’s a generation ahead of the current RAV4, after all. This will change at the end of the year when the new RAV4 hits dealerships, and it’s possible the price of the Toyota will drop against the strong-selling Honda to clear out the 2018 models, but don’t count on it. 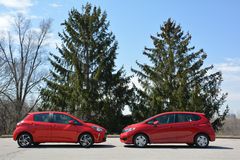 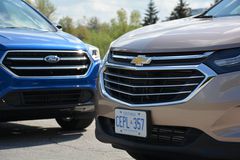 Car Review
We’re looking for a used SUV with some style that seats six
June 7, 2018 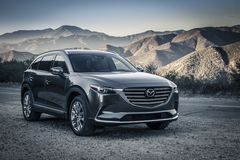