What a difference half a century makes.

A Mustang that looks good and goes fast? Sure. A Mustang with a distinctly American growl? Mail it in. But how about a Mustang that feels balanced, revs like a Fidget spinner and corners like it’s glued to the road?

Fifty years ago, a very stylized crime drama set in the streets of San Francisco cemented the Mustang’s reputation as one hot piece of Detroit iron. The movie, Bullitt, featured a 10-plus-minute car chase scene so authentic in its feel and so free of hokey Fast and Furious-style special effects that many critics argue it is the best ever made.

McQueen was at the wheel of a dark green Mustang GT fastback. The bad guys were driving a villainous black Charger. You can gather who won.

A full half-century later, Ford’s tribute to that legendary Mustang comes in the same Dark Highland Green colour, also has no exterior badging (save a faux Bullitt gas cap at the rear), sounds every bit as hot, but performs in a way that would surely leave the late actor slack-jawed.

The modern Bullitt is equipped with a hefty 5.0-litre V8 that features an open-air induction system and intake manifold lifted from the Shelby GT350. This car cranks out 150 more horsepower, than the original, has six forward gears instead of four and an athleticism only modern technology can deliver.

At the heart of its newfound handling prowess is the second-generation MagneRide electromagnetic damping system that continuously adjusts the car’s suspension to road and driving conditions. Sensors collect 1,000 data points a second on such factors as the car’s throttle load, acceleration/deceleration, cornering and attitude. The magnetic fluid in the dampers responds instantly to keep the car dead-flat regardless of conditions.

“It’s a lot about agility when you get down to it,” said Carl Widmann, Ford’s chair engineer who led the 50th anniversary project since it began in 2015.

The engine also reflects five decades of evolution. Although it can pull from low revs, it doesn’t really come into its own until you’re north of 4,000 rpm and reaches its 475 horsepower peak somewhere past 5,000. It redlines as 7,500 RPM – high for a U.S.-made V8.

We took this beast out on some jagged and twisty roads outside San Francisco and discovered just how agile it can be. The car feels better balanced than any V8 Mustang before it.

But this car isn’t just about performance. Its rich black leather interior highlighted with subtle green stitching conveys a sense of sophistication. And, in a nod to its heritage, the car’s patterned aluminum dash holds vacuum and oil pressure gauges that look like they belong in its famous forebear.

Indeed, the details signal why this Mustang is destined to sell out, even at the pulse-quickening price of $57,525 in Canada. The exhaust note, for one, is tuned to deliver a bombastic symphony at every gear-change, snarling like a bear on acceleration and letting out a playful burble when you let off the throttle.

The distinctive cue-ball gear shift knob – a nod to the original – is another. Widmann said it was the last part sourced for the car, and one of the most difficult to find. This is not a $5 piece of plastic ordered in bulk from Alibaba – Ford wanted a ball with quality and heft. A series of parts makers turned thumbs down on the challenge until an aerospace company in Livonia, Mich., finally agreed to produce it, complete with a laser-etched shift pattern on top.

The Bullitt comes in just two colour choices in Canada – the green and Shadow black. The only option in Canada is the snug-fitting Recaro seats ($1,800) that keep your bottom straight and composed in tight turns, thanks to built-in cooling. Its only transmission is an easy shifting six-speed manual with hill assist that keeps you from rolling backward (and a nifty feature that produces a little rev-blip every time you downshift). Ford decided to forego the wider appeal than an automatic would bring, Widmann says, because the car wouldn’t be true to the original.

You may ask if any Mustang is worth the kind of money Ford is asking for the Bullitt. The answer is to put it up against Mercedes, BMWs and Audis priced at thousands of dollars more. This may be the first Mustang that belongs in the same playground.

Widmann calls the Bullitt “a dead-centre product” – a machine worthy of 50 years of heritage.

“It’s a serious machine,” he said. “There’s not much that can touch it.”

Some spicy driving around back roads near San Francisco proved that statement is not hyperbole. This is a world-class hot rod.

Its front snout is sloped, and makes it look unlike the perky-nosed original Bullitt. The virtual absence of external badges and the dark green colour make this car stand out in a crowd. The Bullitt has a kind of American beauty that sets it apart – understated aggressiveness.

In a nice blend of the modern and the heritage, the Bullitt has subtle touches such as dark green stitching on the black leather seats. The patterned aluminum dash with inset guages are beautiful. The seats are snug and comfortable, and cabin noise is moderate at cruising speeds even with the tuned exhaust.

Handling is lights years’ advanced on other recent Mustangs, thanks to magnetized suspension damping and sticky Michelin tires. The throaty V8 is forgiving at low revs but really doesn’t come into its own until above 4,000 RPM.

A snazzy LED dash mimics the look of real gauges. Ford’s Track Apps lets you view performance metrics on the instruction panel. And one switch lets you instantly switch engine and suspension setups for normal driving, snow and wet conditions, track or even the drag strip.

It’s a pony car, not a people-hauler. There’s weekend luggage room for two, but don’t plan on bringing the family.

Vastly improved handling characteristics combined with a snappy six-speed manual and a 480-horsepower high-revving V-8 puts this Mustang into a new class of pony car. It truly is a world-class contender.

Car Review
Review: The M5 Competition is an awe-inspiring drive, but is it worth the extra cost?
August 3, 2018 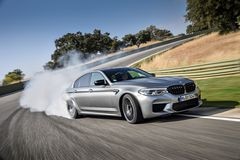 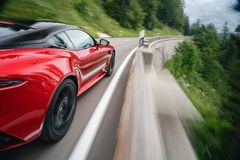 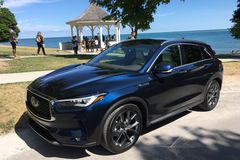