The Fiat 500 made its world debut in 1957. With its 479-cc engine producing just 13 horsepower and an teensy 1.84-metre wheelbase, it was designed as a practical and economical car for Europe’s narrow urban streets.

The Willow Springs International Raceway in Rosalinda, Calif. held its first race four years earlier. A winding track carved out of 600 acres of Antelope Valley desert, it remains America’s oldest road course – a place to push the most outrageous machines of the western imagination to their limits.

Sixty years ago, a Fiat 500 would have been as out of place at Willow Springs as John Wayne in a Fellini film, but fortunately for lovers of small, sprightly Italian cars, things have changed.

The Fiat 500 made its North American debut in 2010, and aside for a new backup camera and some exterior tweaks, the 2019 edition carries much of that original design forward. The Fiat 500 Abarth is the evil twin of the standard 500, with a sport-tuned engine and a twin-tipped exhaust that rewards your heavy foot with a demonic howl. While it’s as compact and economical to operate as its sibling, this Fiat was designed to hold its own should it ever find itself at a place such as Willow Springs, as it does today.

The Fiat 500 Abarth generates 160 horsepower and 170 pound-feet of torque, which may seem a bit puny compared with other hot hatches such as the VW Golf GTI, but is actually right on the money for a car of this size. Fiat’s engineers could have figured out how to shoehorn more power into its diminutive 1.4-litre turbocharged four-cylinder, but that would be at odds with the 500 Abarth’s guiding philosophy that it’s more fun to drive a slow car fast than a fast car slowly.

“The 500 surprises you with how good it is,” says Dan Fry, who served as engineering manager for the car’s development. In addition to creating a competent daily-driver, Fry and his team did everything they could to make the 500 Abarth a competent track car, too, including adding an anti-roll bar, an extra degree of negative camber on the front wheels and stiffer front-end springs. “It’s about making it nimble, adding as much grip to the front end as you can," he says. "That makes it really rewarding for the driver.”

Fry’s hard work bears itself out on the track at Willow Springs. After firing up the engine and punching the “Sport” button, the 500 Abarth accelerates enthusiastically with a snarl from its pipes and shows itself to be surprisingly nimble. It is, as Fry promised, far more fun than it has any right to be.

Most Fiat 500 Abarth owners won’t take their cars to the track, but that’s no great loss. One of the joys of small, agile cars such as this is how fun they are to drive on city streets – and that fun doesn’t always increase with speed.

Aside from the drive wheels being in front, the 500 Abarth sacrifices some handling due to its 103 millimetres of ground clearance and high driving position. This makes it easy to get in and out of but leads to a noticeable amount of roll in the corners. After several laps around the Willow Springs course in a 500 Abarth and the low-slung Fiat 124 roadster, the latter shows itself clearly as the more competent performer. For a sub-$30,000 sports car with four usable seats, however, the Fiat 500 Abarth doesn’t have anything to apologize for.

Those who like small, zippy hatchbacks and Italian design will find much to appreciate in its sprightly turbo engine and cheerfully bulbous silhouette. It’s an unlikely pairing – La Dolce Vita meets True Grit – but one that frequently surprises you by how good it is.

Its retro looks recall the original 1950s Fiat 500, which is as refreshingly Italian as lemon gelato and just as beloved. Forged black rims and Abarth livery (along with that great exhaust) help to temper the “cute” factor.

The interior of the Fiat 500 Abarth reminds you that despite its sporty disposition, this is still very much an economy car. Things such as red interior accents and metal racing pedals are a nice touch, but the surfaces elsewhere feel low-quality.

This car was built to be fun, and it delivers in spades every time the engine roars to life. You don’t need to run this car around a track for it to put a grin on your face.

Chrysler’s uConnect interface with a five-inch screen is standard equipment, as is a backup camera and an Alpine audio system. An upgraded Beats sound system is also available.

The Fiat 500 is designed for easy parking on crowded downtown streets, so cargo space is at a minimum. Its hatch and folding rear seats, however, ought to be sufficient for most day-to-day hauling.

You don’t need to drive the Fiat 500 Abarth on a track to have a blast. Racing-tuned performance in a compact and economical hatchback makes for equal parts value and fun.

The writer was a guest of the automaker. Content was no subject to approval. 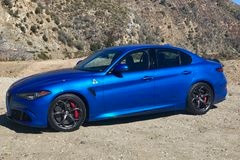 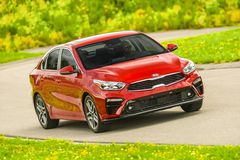 Car Review
Review: The new Volvo S60 is safer than ever, but also stylish and sophisticated
December 11, 2018 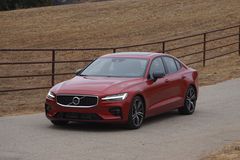