In past articles, I have argued that retirees are better off waiting until age 70 to start their Canada Pension Plan pension, assuming they have enough savings to tide them over until then. Doing so increases the amount of guaranteed income they will have for the rest of their lives. It also reduces your long-term investment risk because you are spending your savings first.

The reason this deferral approach is so effective is that the pension is nearly 50 per cent greater in real terms if you start payments at 70 instead of 65. To the extent you are still drawing income from your savings, the bigger CPP pension will not totally eliminate income uncertainty but it will help. By postponing your CPP pension, you are essentially transferring some of the investment and longevity risk back to the government.

In spite of the many advantages of this option, almost no one takes the government up on it. Only 1 per cent or so of all CPP recipients postpone the start of their CPP payments until age 70. What we have is a rare situation – the government is quietly doing the public a big favour and hardly anyone is taking advantage of it.

Rob Carrick: How to figure out the best age to start getting CPP and OAS

Read more: 'How Long Will I Live?' and other helpful online retirement calculators

Our general reluctance to starting CPP late is based on the fact it forces us to draw down our savings more quickly. Let's say you retire at 65 and to keep things simple, let's assume your spouse is also 65 and has some CPP pension. Between the two of you, the annual pension might amount to $20,000. If you both start CPP payments at 70 instead of 65, you will need to withdraw an extra $20,000 a year from your retirement savings for five years to cover the shortfall. No one likes to see their savings dwindle, and so the average individual will elect to start CPP payments as soon as possible.

Clearly, the advantages of postponing CPP that I described at the outset do not sound that compelling to most people. Certainly they are not keen to see their savings are dropping more quickly but there is a bigger reason why they will not wait until 70. It is encapsulated in the question, "What if I die early?"

There are several ways I could respond to this. First, I could say that the probability of premature death is small. Between ages 65 and 80, there is only a 13 per cent chance of dying if you are female and 20 per cent if you are male. Of course, you might say that 13 per cent or 20 per cent is still high enough to be concerned.

Second, I could point out the obvious: If you die early, you have bigger concerns than getting short-changed on your CPP pension. Like not breathing! In this case, you would say that your concerns about early death are for your spouse. You want to be sure that the needs of your surviving spouse are taken care of, if you pass away early on.

It turns out that this rationale, while altruistic, is equally flawed. Early commencement of CPP does not help your surviving spouse after all. To show why, let us consider an example.

Carl and Hanna are a middle-class married couple; both are age 65 and on the verge of retirement. They both worked and have managed to save $400,000 in RRSPs, an amount they transfer into registered retirement income funds (RRIFs). Their income target (including CPP and Old Age Security pensions) is $55,000 a year, subject to adjustment for future inflation.

They don't know it yet, but let's assume for our example that the return on their RRIF investments will be very poor for years to come. In fact, they will be the type of returns one would expect only 5 per cent of the time. Even worse news, Carl will die at age 68. (After his death, I estimate that Hanna's income needs will drop by 30 per cent.)

With this backdrop, we will consider two scenarios. Under the first, Carl and Hanna both postpone the start of their CPP pensions until age 70. The only sources of income between 65 and 70 are their OAS pensions and income from their savings. When Carl dies at age 68, his OAS pension payments cease. A part of the CPP pension that he would have received goes to Hanna as a survivor pension but the rest of it is lost. This situation is illustrated in the top accompanying chart.

In spite of Carl's death, the chart shows that Hanna can continue to spend an amount equal to her income target right up until she dies at 95. In fact, she can spend more than her income target in her late 80s and 90s. This outcome is rather impressive given that the investments performed so poorly for so many years. In spite of Carl's early death, the late start of CPP pension does not create an income problem for Hanna.

Would Hanna have been even better off if she and Carl had both started their CPP pensions at age 65? You would think the answer is yes since Carl would have received some payments from the CPP before his death. As a result, they would have drawn down their savings more slowly before age 68, which would have left more money for Hanna after Carl's death. But somewhat perversely, it turns out that Hanna is worse off. As the lower chart shows, she ends up running her savings down to zero by age 85.

Starting CPP early preserved more of the RRIF assets but the widowed Hanna still runs out of money sooner. This counterintuitive result happens because the early CPP start also means that her CPP benefits (including the survivor benefit from Carl) are lower for life. While she starts widowhood with a bigger CPP balance, she also runs it down more quickly.

What happened to Carl and Hanna is true in general. If you are concerned about your spouse's welfare if you die young and think that starting CPP early will improve the financial situation, you should think again.

Frederick Vettese is the chief actuary of Morneau Shepell and author of The Essential Retirement Guide: A Contrarian's Perspective. He does not benefit directly or indirectly from the sale of reverse mortgages. 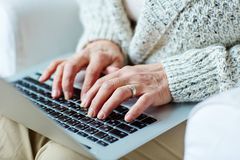 Concerned about your retirement finances? Don’t be Subscriber content
April 10, 2017
Follow us on Twitter @globebusiness Opens in a new window
Report an error
Due to technical reasons, we have temporarily removed commenting from our articles. We hope to have this fixed soon. Thank you for your patience. If you are looking to give feedback on our new site, please send it along to feedback@globeandmail.com. If you want to write a letter to the editor, please forward to letters@globeandmail.com.
Comments