Can't sleep? You aren't alone: In 2011, Laval University researchers published a study of 2,000 Canadians that found 40 per cent of respondents had experienced one or more symptoms of insomnia – taking more than 30 minutes to fall asleep, waking up during the night for more than 30 minutes, or waking up 30 minutes earlier than they wanted to.

A November 2016 report by the non-profit research organization RAND Europe calculated that Canada loses 80,000 working days, at a cost of $21.4-billion a year, due to lack of sleep.

But how those sleepless hours affect us depends on a number of factors, including gender, age and the time you spend asleep. Here's what some of the latest research tells us:

Sleeping too long can kill you, too: Typically, adults sleep anywhere from seven to nine hours. Getting too little certainly isn't good for your health. But repeated, larger-scale population studies by researchers in Norway and Taiwan found that sleeping more than eight hours was also linked to an increased risk of dying from certain kinds of heart disease, even adjusting for many other health factors.

Those are big-data findings, but, individually, everyone has their own sleep sweet spot. It's tricky to find it, though tracking your sleep patterns with a diary is a good step. Ideally, though, suggests Dr. Elliott Lee, a sleep specialist at the Royal Ottawa Hospital, you'd go on holiday for two weeks, turn off the alarm and go to sleep when you are tired and wake up naturally. Take the average, and that's how much sleep your body naturally needs. If only we could get a prescription for that.

Sleep isn't gender-neutral: Historically, most sleep studies have been conducted on men, and it was assumed those results could simply be applied to women. That's been proven wrong, says Lee. Women's sleep is often negatively affected by pregnancy, menstrual cycles and menopause. Women report higher rates of insomnia than men, but, until menopause, are diagnosed with significantly lower rates of sleep apnea. Women also appear to be more sensitive than men to sleep deprivation. Although the research isn't conclusive yet, Lee also suggests that treating sleep problems can help women struggling with infertility.

Snoring is nothing to laugh at: Lee takes snoring very seriously. It's a primary symptom of sleep apnea, a dangerous disorder in which breathing stops briefly during sleep. In fact, many of his most severe patients have no idea they aren't breathing in their sleep until a partner's complaint about their nocturnal rumbling brings them to the clinic. For women, however, snoring is less likely to be a symptom – not least because, as Lee puts it, their slumbering counterparts tend to be "less reliable witnesses." But if you have a kid snoring loudly at home, it might be a good idea, he says, to get their sleep checked.

Sleep and learning disorders: Researchers are beginning to explore a link between poor-quality sleep in children and teens and learning disorders such as ADHD, and mental-health issues such as depression. Lee recommends sleep studies for children struggling with these issues. As well, he says, removing tonsils – a once common operation now rarely performed – should be a first-line treatment considered for children with sleep apnea. 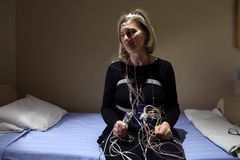