Modern design tends to be polarizing. Not everyone loves the boxy aesthetic that swaps out ornamentation for spare lines. One tenet of modernism, however, seems to be wildly popular: the open-concept plan. It’s almost impossible to watch a HGTV reno show, open a shelter magazine or scroll through Pinterest and Instagram without seeing designers and homeowners praising the benefits of wall-free living. Everyone seems to love the airiness, the light filled-ness and the ability to simultaneously cook a meal in the kitchen and chat with house guests in the living room. But with the visibility of openness comes the lack of ability to conceal what you may not want people to see – all of a sudden, hosting a dinner party means showing off Gordon Ramsay-like skills with a Julia Child-like chill, even when the pot roast is burning or your partner forgot to turn on the peas.

A little more than a century ago, the idea of open-concept barely existed. Homes were smaller, families were larger and walls were considered a prized luxury that provided much-desired privacy. Particularly in the Victorian era and shortly after, children were to be seen and not heard, and then only seen when it was deemed appropriate by their parents. By the time architects such as Frank Lloyd Wright started to experiment with open-floor plans in the early 20th century, the cultural preference was starting to shift. Suddenly, keeping a constant eye on the kids was desirable, and locking them in a tucked away play room thought of as regressive. Walls have been falling ever since, accelerating in the post-war years, when the epitome of family life was more Brady Bunch, less Downton Abbey.

But have things gone too far? When used correctly, walls can, after all, positively shape the experience of being in a home. They can block errant smells, noises and views. They can also create a sense of progression, suspense and revelation that makes wandering through a home exciting. Open-concept plans, on the other hand, can be like simultaneously telling someone the set up and the punch line of a joke – there’s no sense of discovery because everything is unveiled the second someone walks in the front door. Plus, sometimes it’s simply nice to be in a small, cozy interior.

Containing mess is one reason that contemporary architects are starting to embrace walls again. Toronto architect Vanessa Fong used to live in an open-concept house, the kind in which kitchen, living and dining areas all flowed into one amorphous room. While she liked the idea in the theory, there was one significant problem. With three kids, the visual clutter felt inescapable. “It just looked untidy all the time,” she says. “There was nothing to contain the clutter.”

Dealing with clutter is a common open-concept complaint. In May, 2018, Atlantic magazine ran an article called The Curse of an Open Floor Plan. The story describes how Schumacher Homes, a residential development firm in Akron, Ohio, has started building open-plan houses with a secret. In addition to the pristine kitchen that guests see as they wait for their food, a second “messy kitchen” is behind the one in view – a place for preparty prep and postparty dish stashing. Importantly, the article notes that open-plan progenitors such as Frank Lloyd Wright simply presumed they were designing for residents who employed a cleaning staff. In reality, spaces marketed as “great for entertaining” often turn into an annoying obligation to be incessantly orderly as every room is on display at all times.

Instead of building herself a second kitchen – which, let’s be real, is both expensive and inane – Fong and her husband, industrial designer Ryan Taylor, decided to move to a house that better suited their needs. Open-concept was not on their real estate wish list. Instead, they found an old Victorian with a once-common, now passé floor plan: a foyer leading into separate sitting and dining rooms, with the kitchen concealed in the rear. Fong added a modern flair, with white walls and black accents. It’s also “still open in the sense that there aren’t doors closing off the rooms,” she says. “But the walls mean if there’s a mess in the entryway, I don’t see it.”

When working with clients, Fong doesn’t have a hard rule against open-concept or for walls. Her approach is more nuanced. “I try to understand how they will live in the house, and craft appropriately,” she says. For ultraneat empty nesters who really do like to cook in front of other people, open plan it is. “I also try to understand the house. Especially in a long, narrow house, walls can make the rooms very dark and block light.” In that case, rather than a hard partition, she might try a shift in levels, placing a room down a few steps and obscuring views with a half-wall to create a sense of separation.

Finding the right balance between separation and togetherness was a priority for Montreal photographer Evridiki Spiliadis when she was creating a new office three years ago. Working with architect Alain Carle, she wanted an open area where she could work or maybe mount an exhibition; a kitchen, so as not to starve while working long hours; as well as a comfortable space for her three kids to relax if they have to spend time in her studio.

Other than the washroom, nothing is entirely enclosed in walls and there are no doors. Instead, partial partitions shape the studio’s character. A tall storage unit separates a bank of work desks from the kitchen and living areas. A deep, plush window bench for the kids to read on is recessed into a playful nook off the living room, almost like a room within a room. Around a corner, the kids also have desks to quietly do homework, just a shout away if they need help.

“It’s beautiful,” Spiladis says, “but it’s also practical. I have lots of light flowing through. But I have lots of storage, and a sense that the working and living areas are totally separate.”

Some designers are trying to blur boundaries in other ways. At the Butterfly, a new luxury condo development being built in downtown Vancouver, architect Venelin Kokalov of Revery Architecture is using clear glass partitions to separate bedrooms from the living space. The barrier blocks sounds and smells while allowing sunshine and mountain views to pass from space to space. When extra privacy is required, floor-to-ceiling curtains can be pulled along the glass. “I believe in open-plan spaces,” Kokalov says. “But I’m also interested in ways to give people more flexibility. The glass and the curtains allow people a lot of control to how they want to live in their spaces.” 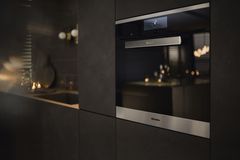 What’s the secret to creating a comfortable and stylish guest bedroom?
November 4, 2019 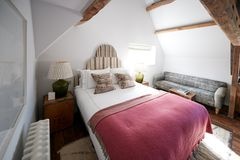 How can I refresh our powder room without renovating?
October 21, 2019 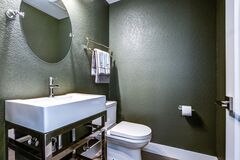