Charlie Guiang and Jeff Rutherford’s living space was inspired by their Kyoto honeymoon. It’s fitting, since during that trip they bid on and won their home in Toronto’s Annex neighbourhood via text and Facetime. “It was our first time in Japan and we were very inspired by what was around us. It was actually during cherry blossom season,” Guiang says. That’s why their architect, Robert Micacchi, who helped with the home’s renovation, called the project Sakura House.

The Japanese influence is most prominently seen in the slatted wood feature wall, which spans the length of the first floor. The millwork piece, by Neal Hall of Radio Custom Building, is similar to those seen on their trip. And though beautiful, it serves more than a decorative function. The wall contains storage and lighting and acts as a screen for the stairwell. “It’s obviously very warm and really inviting, but it lets a lot of light through,” Guiang says. “And it houses a lot of stuff: the fireplace, electronics. It’s just a really lovely wall.”

The white-oak slats are organized according to grain and colour. The result: “You get a transition from the lighter, whiter hues of wood to the darker purples, the centre cuts,” Rutherford says. “I probably wouldn’t have noticed had [Hall] not mentioned it, but now I see it every time I look.” This attention to, and celebration of, the wood’s natural properties recalls a wabi-sabi approach. “It’s the imperfections that make it so much more beautiful, which you see a lot of in Japanese design,” Guiang says.

To finish off the space, and for indoor furnishings, the couple looked to interior designer and gallerist Alison Milne for assistance. She custom designed the rug and draperies, for instance. “We tend to pick things that are squarer and the architect loves straight lines,” Guiang says. “Alison added elements that were organic and round, and it was a really nice marriage.”

Speaking of, Guiang and Rutherford hosted their 2016 nuptials at Milne’s gallery. The portrait that’s framed by the feature wall, by artist Tina Berning, was a gift from Milne on their wedding day. “It’s called Hospital and Charlie’s a physician,” says Rutherford, explaining its significance. “The way this artist works, she sketches and paints on found objects. The canvas is a bread recipe that’s written in German, and I always make bread,” he says. “So, it’s a nice combination.”

Guiang and Rutherford enjoy pairing mid-century modern pieces, such as the Knoll womb chair and Isamu Noguchi Akari paper lamps, with more contemporary items, such as the modular, nesting white-glass-topped coffee and side tables by Per/Use. The entire space, in fact, seems the result of successful combination and collaboration, without a whiff of compromise.

In approaching the renovation, they considered their pooch Bruno’s love of big windows and open views – “so he can stare at all the squirrels, birds and raccoons that go by,” Guiang says – and even took the input of neighbours into account. “It actually affected the way we designed the house,” Guiang says.

“We kept the original A-frame and footprint of the house,” Rutherford says, adding they maintained the front porch for sundowners and socializing. “It’s contemporary now, it’s a modern home, but it still fits in with the over all aesthetic of the street and neighbourhood, which was the goal.”

Their architect, Micacchi, seemed to concur as well. “When all was said and done he came over and said that the things he loved most about the house were those that we collaborated on,” Guiang says. “And not that we wanted him to leave, but he wouldn’t leave. He was so struck with how the house felt. He asked if we’d mind if he just sat there a bit longer.” 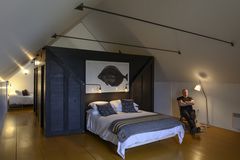 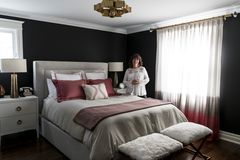 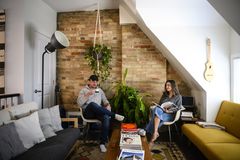