While Caroline Gilbert was waiting recently to see her surgeon, she used mindfulness meditation to keep herself calm before the appointment.

"The last time I saw him, I was in tears," says Gilbert, 56, who lives in Stratford, Ont. "The meditation helped me to be calm enough to have a productive discussion because I wasn't in a state of panic."

After discovering mindfulness online, Gilbert took an eight-week mindfulness-based stress reduction (MBSR) program locally two years ago because she felt she was spinning out of control with anxiety. She credits the meditation technique for helping her gain a new perspective, particularly when she was later diagnosed with cancer.

However, she initially found it a huge challenge to learn, especially carving out the time to practise every day.

"It's uncomfortable to start with because you learn to sit with your thoughts and emotions as opposed to running away from them and distracting yourself," Gilbert says. "I've always been a person who worries about what's going to happen tomorrow. This still happens so it's not a cure-all, but it is a coping mechanism. It made me realize that nothing is permanent so any uncomfortable feelings or body sensations are not permanent. That helped me through my cancer surgery pain."

An increasing number of people, especially women, are exploring mindfulness meditation as a way to manage stress and cope with today's rat race.

The MBSR program was created in 1979 by Jon Kabat-Zinn, professor of medicine emeritus at the University of Massachusetts's medical school. His clinical research over two decades provided scientific evidence that it was effective for reducing stress, anxiety, pain and sickness.

Kabat-Zinn defines mindfulness as "the awareness that emerges through paying attention on purpose, in the present moment, and non-judgmentally, to the unfolding of experience moment to moment."

"When you're aware, it drops you into the moment," says Michael Gregory, a therapist in Stratford who's been teaching mindfulness for more than 15 years, including the MBSR program Gilbert attended. "The breath is a beautiful focus because it's always happening in this moment. Through the cultivation of the mindfulness practices, we cultivate this awareness along with the ability to concentrate so you're not going, 'Squirrel!' You drop into this present moment and experience the fullness of life."

One learns mindfulness through a systematic training which involves three core practices: sitting meditation, a simple introduction to yoga and the body scan, which is a guided meditation. Gregory describes the process as pretty intense, but basically it's about teaching people to be able to observe thought and realize that it's different from emotion and physical sensation.

"At the end of eight weeks, you're probably going to have the same partner and relationship issues, the same financial situation, the same boss and health issues," says Gregory. "I can't change any of that. But I can teach you how to shift your perspective so you can work with those things skillfully and reduce unnecessary suffering."

Gregory sees the trend toward mindfulness exploding right now, as does Judy Turner, a licensed psychologist and psychoanalyst in private practice in Toronto and the co-founder of Mindfulness Meditation Toronto.

While Turner notes it was mostly women who were interested initially, more men are coming now. Turner thinks mindfulness is such a growing trend because people are trying to deal with so many demands on their time and energy and are so stressed that it's difficult to have enough resources in simple things where people can help themselves just be a little calmer inside.

With a lot of Fortune 500 companies, such as Google and Facebook, offering mindfulness programs to their employees, Turner says she's getting more requests from businesses.

"I've taught mindfulness in law firms, insurance offices and real estate companies," says Turner. "One reason is there's solid research behind it and more is being done about the value of it to people, in terms of reducing stress and absenteeism, plus improving happiness, productivity and excellence at work. That has a big appeal for the business world.

"It's also a secular program. Some people have this notion that it's an airy fairy thing where everyone sits around and tries to levitate. No! People are starting to have a sense that mindfulness is science-based and that it can really help with the ailments of the 21st century which are so driven."

While there's a lot of information about mindfulness online, Turner says it's much harder trying to do it on your own. However, she suggests it's quite possible to learn it on the Internet if it's an online class where you can sit and practise with other people guided by a teacher on the screen.

"The class [either online or in-person] is very useful because you learn a certain way of practising mindfulness," Turner says. "You have suggestions of how to practise between the classes. When you come back, you talk about how that was for you. We have the feedback of the group together about what worked for different individuals.

"Really what we're trying to do is establish a new habit that's very unfamiliar, so initially you can have a lot of resistance. We are trying to change the habit of frantic mindlessness and become a little calmer and more mindful. It takes time and practice to do that and it takes support.

"People often come back after the first class and say, 'I think my mind is way too busy to do this.' Really, that's not the case at all. It's just what you have to work with. You just have to keep returning to the practice of being aware of the breath. Then people start to get it.

"It's a tool. It's good to have something that's so easily accessible, completely low tech and right there with you all the time."

Women getting pumped up about weightlifting
June 26, 2017
Bicycle commuting puts riders on the road to fitness
June 16, 2017
Sun protection a year-round necessity
September 28, 2017 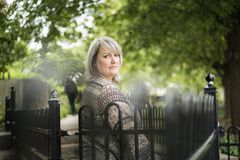