The Essay is a daily personal piece submitted by readers. Have a story to tell? See our guidelines at tgam.ca/essayguide.

I click on a series of photos that chronicle Justin Trudeau's life, and among them is a shot from 1973. Pierre Elliott Trudeau walks toward the camera, cradling a young Justin under his arm like a football, while at left a uniformed RCMP officer performs a smart salute.

What rivets my attention is the man in the background, following 10 paces behind the then-Prime Minister − a handsome, mustached fellow in a dark suit − unobtrusive yet vigilant. There's a half-smirk on his face; he's likely amused at the PM's playfulness. "The Trudeau years," he would later call them: from 1968 to 1973, when as an RCMP officer Dad accompanied Trudeau, and later his family, on plainclothes security.

In his memoir, written after retirement, Dad recalls how the single and eligible Trudeau originally waved off security, which he considered an invasion of his privacy. After Bobby Kennedy's assassination, however, the PM relented and advised the RCMP Commissioner that he would accept one plainclothes, bilingual member of the force as a bodyguard. On many occasions that was my dad.

I was 7 in 1968, and I recall Dad often coming in the door of our country home outside Ottawa and dropping a rose into the glass goblet we kept on the kitchen counter. Trudeau would take the flower from his lapel at the end of the day and hand it to Dad − a symbolic sign-off and acknowledgment that the PM was safely home at 24 Sussex Drive.

One day, I took Trudeau's latest wilted boutonnière to my Grade 1 class for show-and-tell. My fellow students were unimpressed. My teacher pelted me with questions about the charismatic PM: Had I met him? Was he as handsome as on television? Other show-and-tell items from Dad's time with Trudeau were more impressive to my classmates: a signed photo from the crew of the Apollo 11 mission, which landed the first men on the moon; a gold pen from Patricia Nixon with her signature engraved in black letters; a photo showing Dad following Trudeau and Barbra Streisand on their way to a performance at the National Arts Centre.

More memories flood back: me answering the telephone and taking messages for Dad from the Office of the Prime Minister; Dad coming in the door after work with torn clothing. During the 1968 election campaign, Trudeaumania was at its peak, and Dad, in protecting Trudeau, would get caught up in the frenzy of adoring fans.

Since my father's death in 2008, I have been unable to pick up and reread the limited-edition memoir I helped him self-publish for his grandchildren in 1996. But now, the photo my cousin shares prompts me to cast aside my stubbornly lingering grief and leaf through the book, with its scarlet cover and gold embossed lettering.

In one chapter, Dad recounts days spent with a then-single Trudeau at the PM's summer residence in the Gatineau Hills. How Trudeau would often ride with Dad in the unmarked police car, casually jumping out himself to open the many locked gates leading to the house; how, when he had no guests at the lake, he would invite Dad to dine with him; how Marc Lalonde (then-Principal Secretary to the PM) dropped in unexpectedly one evening and the chicken leg that was about to be served to my dad was rerouted to the impromptu guest. (Dad made his way to the kitchen, where the chef whipped him up an omelette.) As I read I laugh, and cry some too. My dad was a character, and a storyteller. I still miss him, dearly.

When Pierre Trudeau passed away in September, 2000, his body lay in state for several days in the Centre Block on Parliament Hill. Dad, in remission from his latest bout of cancer, called and asked if I would drive him there. I picked him up, so debonair in his grey flannels, blue blazer and ascot. At the Hill, we joined a long line of mourners. Easily a five-hour wait. I worried about his capacity to stand for that length of time.

A few moments later, a young RCMP officer on crowd control approached us. Was it was my dad's smart attire? His cane? Or did he recognize something in his expression that marked him as one of the RCMP brotherhood? Dad told him how as a member of the force he had provided security to the former PM; how in later years, when Dad was a senior officer in charge of security for visiting VIPs, Trudeau, seeing Dad at a function, would make a point of coming over to say hello.

The officer gave Dad a salute. "Sir, it would be my honour to escort you to Monsieur Trudeau so you can pay your respects."

My dad stood a little taller. With the Peace Tower soaring above us, we made our way past the line of mourners to the Centre Block. There, Dad shared a private moment in the Hall of Honour, his hand protectively patting the casket of his former charge.

This is a memory I will cherish, along with my dad's memoir, now dusted off and revisited, thanks to a resurrected photo.

I heard that the same photo prompted an emotional reaction from Justin when it was presented to him by the son of the uniformed officer who long ago delivered that crisp salute to his dad.

Three children of three fathers – bound by a moment, and the snap of a shutter. 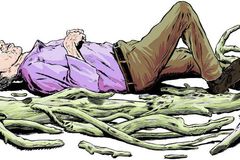