"I'm not a skanky crack whore," Diane Schoemperlen offers in a calm voice with a raucous laugh as punctuation.

As opening lines go, that's not bad. One of the reasons Schoemperlen wrote This Is Not My Life, A Memoir of Love, Prison, and Other Complications, was to upend the stereotype of women who fall in love with prison inmates. But her statement to me is nowhere near as attention-getting as the line she chose to start her book.

"It is safe to say that never once in my life had I dreamed of being in bed with a convicted killer, let alone one with his teeth in a margarine container in the kitchen, his mother in the next room, and the word HI! tattooed in tiny blue letters on his penis."

If that doesn't keep you reading, I'm not sure what will. And you should, because this memoir about the Governor-General's Award-winning author's six-year, on-and-off relationship with a murderer is a story about a search for the boundaries of love.

We don't like to think of love as having boundaries. We long for it to be unconditional, eternal, pervasive. We're told it should be. And that's part of what Schoemperlen wrestled with as she stayed in a relationship that outsiders, including close friends, questioned and then came to see as emotionally unhealthy. Readers will likely read the tea leaves of this relationship before Schoemperlen can or is willing to – which makes for perfect tension in the book.

Morbid curiosity drives the plot forward. What could be next? Well, there's a peek inside prison culture, including mention of frequent, furtive sexual encounters between men, acts her lover referred to as "oil changes." There are scenes in the trailer where they had "conjugal visits;" insights into the ramifications of former prime minister Stephen Harper's tough-on-crime agenda. And there's her willingness to forgive and forget; her tendency for loopy, wishful thinking; and her trust in the power of love. You just keep wondering when this smart, compassionate woman will come to her senses and get free of her volatile lover.

The irony is hard to miss. The relationship put her in a kind of prison, too – one of her own psychological making – and she had to stay there for as long as she did, and struggle, in order to finally get free.

The decision to write the story as memoir reveals much of what you need to know about Schoemperlen's character. She cares what others think but not at the expense of what she feels is important to reveal. She will take no prisoners, not even herself, in her quest to explore what happened. And in that, she has defiant pride.

"I am not ashamed," she says pointedly and unprompted during the interview. "Why should I be? I loved the wrong person. … I'm really not ashamed and I know that there are people who think that I should be. But shame is one of the most debilitating and destructive things that we as humans feel. And I think as adults, we have a choice between whether we are going to feel ashamed or whether we are not. If I was ashamed, I would never have written this book. I would have hidden it."

Which doesn't mean she isn't nervous about its release. "Oh, yes, I'm worried about it," she says with a smoker's rumbling laugh. "I realize there may be some negative response. I have felt more vulnerable in writing this book than with any other because all of my other books were fiction. And even though there were autobiographical elements [in them], I could always hide behind that. But now, I don't have that option."

She thought about writing the story as fiction. But in the end, truth won out.

"There are a lot of people – women – who are in bad relationships and don't know how to get out. They don't know why they stay. I don't presume to know everybody but certainly in the writing of the book, I came to a greater understanding of why I stayed," Schoemperlen, who is 61, says on the telephone from her home in Kingston.

She had met Shane, a handsome man in his late 50s who reminded her of the actor Vince Vaughn, in January, 2006, when she began volunteering at Vinnie's, a hot-meal program in Kingston. Working as a dishwasher, Shane was on an escorted temporary absence from a minimum-security prison. Schoemperlen, then in her early 50s, was recovering "from yet another broken heart after yet another regrettable relationship gone wrong," she writes. Also suffering from writer's block, she decided to take up a friend's suggestion to volunteer at the meal service. Within a few months, she and Shane – not his real name – were spending a lot of time together. He was quick-witted, intelligent and flirtatious. "I could always see the good in him," she writes.

In the spring, she and others at Vinnie's found out he was serving a life sentence for second-degree murder, but by then he was a popular part of the kitchen crew. Besides, the crime had happened a long time ago, they rationalized. By the summer, he was writing to her that she was the woman of his dreams. She was taken with him, too, but she hestitated and they decided to just be friends. In the fall, she trained to be a citizen escort, which meant that she would pick him up from the prison in the mornings, sign him out, bring him back after lunch and write a report about the outing. Their conversations deepened. Within a year of meeting – and after she insisted he be screened for sexually transmitted diseases – they became lovers.

"I can't put my finger on why I loved him," Schoemperlen replies, when asked. "The whole matter of who we love and why is too big a question for me in the midst of everything else. I didn't write the book to justify my love for him. I wrote it to take a good hard look at everything that happened."

She has demons, she confesses. She describes feeling that a curtain always hung between her and other people, even her friends, making her an outsider, looking in. She had grown up in a working-class family in Thunder Bay, "in a tiny wartime bungalow with mice in the dugout and plastic ornaments in the front yard." Neither parent had finished high school. They mocked her accomplishments and put her down. "I was not raised to like myself," she states plainly in her book. She didn't feel she belonged there or in Kingston, where other people's lives seemed "clearer, calmer, simpler, more refined," she writes. With this odd combination of vulnerability and defiance to define for herself how she would judge people, she embarked on the relationship, not blindly, she insists, but knowing it was risky.

In retrospect, she sees the weaknesses that made her vulnerable even though she felt she was acting on the strength of her convictions. "I didn't realize at the time how much I wanted to be wanted, how deeply I needed to be needed."

In October, 2008, Shane was granted full parole. They lived together for 49 days, the description of which is hard to read, the tension between them was so palpable. His dark moods take over the page. Despite a new arrest for breaching his parole conditions, reimprisonment and cancer scares – which he misrepresented as a way to manipulate her into caring for him – she persevered in the relationship, getting back together with him after briefly breaking up. Several times, as a reader, I was more scared for her than she seemed to be.

Her big a-ha moment was to realize it was not a failure of love. It was a matter of what was right and healthy for her. She could love him and have to leave him. "That took me so long to figure out and only a short paragraph to explain," she says with a laugh.

Again, her pointed defiance rises in our conversation. "We all make mistakes when we're young. But I was not young. We get older. But this matter of getting wiser is not automatic for everyone. Some of us have to struggle to figure things out."

Shane is now living in a halfway house in Ottawa. They have not been in touch for four years, since they broke up. He is barred from communicating with her. "There are parts [of the book] I think he will really like," she says when asked how she thinks he will respond.

Book Review
Diane Schoemperlen’s By The Book is a poetic journey lead by a skilled craftsperson
May 12, 2018 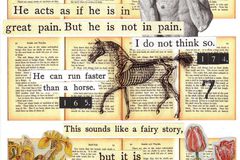 A wife's story of how her killer-sex offender husband fooled her
April 30, 2018
Follow Sarah Hampson on Twitter @Hampsonwrites
Report an error Editorial code of conduct
Due to technical reasons, we have temporarily removed commenting from our articles. We hope to have this fixed soon. Thank you for your patience. If you are looking to give feedback on our new site, please send it along to feedback@globeandmail.com. If you want to write a letter to the editor, please forward to letters@globeandmail.com.
Comments