The Canadian Centre for Architecture (CCA) in Montreal recently held a swish gala to mark its 40th anniversary. Held June 13 at the centre – which includes a research institution, archive (housing 100,000 prints and drawings and some 65,000 photographs) and museum – the gathering also served as a fundraiser to support the centre’s future. The celebration kicked off with cocktails in Shaughnessy House, a circa 1874 home built by William T. Thomas. In the 1970s it was saved from demolition by Phyllis Lambert, an architect, heritage preservationist and member of Montreal’s Bronfman family. The historic house then became a hive for early CCA activities and initiatives until 1989, when a sprawling addition was opened.

Dinner was served in the library of that now 30-year-old, and still great-looking, addition; its architect Peter Rose was in attendance, seated across from the ever sparky and no-nonsense nonagenarian, Ms. Lambert. The 250,000 publications and periodicals that populate the library were the backdrop for a series of long tables that dotted the room. Seated at them were architects, including Brigitte Shim, Bruce Kuwabara and Alexander Josephson, business types including Claridge Inc.’s Stephen Bronfman, Campbell Strategies’ Barry Campbell and my seatmate, lawyer Isabelle Jomphe (all of whom serve on the CCA board of directors), and academics, including Richard Sommer, dean of the University of Toronto’s Faculty of Architecture, and my other seatmate Eve Blau, professor of history and theory of urban form and design at Harvard. The celebratory mood extended to the after-dinner party, which was held in the centre’s striking bookshop. Also on offer was a look at the CCA’s new exhibition Our Happy Life: Architecture and Well-Being in the Age of Emotional Capitalism, which runs through October.

UnMasked in support of CAMH, Toronto

On May 29 in Toronto, another gathering for an important centre was held, this one in support of the Centre for Addiction and Mental Health (CAMH). Canada’s largest mental health teaching hospital, it is also considered among the world’s leading research centres in its field. The beloved biennial funder, now in its eighth year, sees galleries of varying sizes across Toronto open their doors to CAMH supporters for a series of intimate sit downs. This year I dined at Scrap Metal (gallery owners Samara Walbohm and Joe Shlesinger were on hand), as a guest of the event’s co-chair Sandi Treliving and her husband, Boston Pizza founder Jim Treliving. CAMH foundation’s newly installed president and CEO Deborah Gillis and board director Dr. David Goldbloom were also present. After dinner, supporters convened at the Museum of Contemporary Art for a party and by night’s end, more than $1.2-million was raised in support of CAMH research and initiatives.

Live with style. We have a weekly Style newsletter on fashion and design trends, plus shopping tips and inspiration. Sign up today.

Parties of the week: Ottawa’s Politics and the Pen and Biblio Bash in Toronto Subscriber content 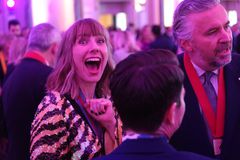 Parties of the Week: The Governor-General’s Awards gala and The Match II in support of Canadian Stage Subscriber content 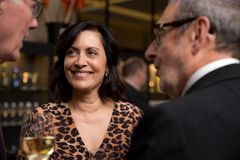 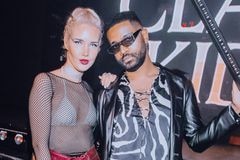