Our journey begins deep inside the Central Suriname Nature Reserve, the world's largest tract of pristine rain forest. It is 5:30 in the morning, still dark, and the air is thick with an earthy mist. Squeaking bats circle above us and an eerie thumping emanates from the wall of trees. We are, it's fair to say, a bit nervous.

Still, we follow in an obedient line behind our guide, a Kwinti Maroon named Doctor Five. We pass what sounds like a rushing waterfall. We climb what feels like an endless hill. Then, finally, the sun appears, a faint glimmer through the thatched underbrush, and we catch our first glimpses of the Voltzberg trail - a six-kilometre path that leads into the heart of South America's forgotten wilderness.

Although many remote locales are relatively untouched - Patagonia, for instance, or the Okavango Delta - the jungles of Suriname have pretty good claim to the title "last Eden." Perched atop Brazil in the middle of the Guiana Shield, nine-10ths of this quiet country is carpeted with rain forest. Deep in the bush, humans are about as scarce as they are in Nunavut. And most outsiders can't locate Suriname on a map.

But that might be about to change. While overall visitor numbers remain modest, tourism tripled in Suriname from 2002 to 2005 to 160,000. Last year, Best Western opened its first hotel in the capital, Paramaribo, and Marriott is currently building a luxurious property there as well.

If all this seems like bad news for conservationists - travellers and fragile ecosystems don't always mix - many welcome the attention. As with Costa Rica, where tourism dwarfs the timber industry, they hope an increase in visitors will encourage the Surinamese to "rent out" their jungles instead of cutting them down.

Whether that happens or not, the comparison to Costa Rica is apt. Suriname has long been an ecotourism hot spot, particularly for birdwatchers adding to life-sightings lists.

Tourism numbers dwindled after a military coup in 1980 and the civil war that followed, but thanks to recent political stability and the lobbying efforts of groups such as Conservation International, this is an ecotourism destination on the comeback trail.

Even if birds aren't your thing, you can see the Caribbean's largest nesting ground for leatherback turtles on the beaches of Galibi. Trekkers can fly to the village of Palemeu and hike to the summit of sacred Mount Kasikasima. Rafting expeditions can be arranged on one of Suriname's remote jungle rivers.

And then there's the Voltzberg trail. This is where jaguars and herds of wild boar routinely come to roam. The canopy above the path is home to eight species of monkey, including brown capuchins and red howlers. Even better (or worse), all of South America's most poisonous snakes find refuge here in the moist nooks of the understorey.

Mind you, my tour group is not here for just any rain-forest inhabitant. We are in search of the Guianan cock-of-the-rock, one of the most spectacular (and sexy) birds on the planet.

We walk single file, Doctor Five with his machete in his hand, the rest of us swilling water and carefully watching our steps. The trail is wide and well-worn, partly because of the increased frequency of groups such as ours, but this doesn't make it without risk. We stumble across an ancient timber, its rotten core threatening to give way to a black and stinking swamp. We crash through a collapsed mess of vines and emerge crawling with ants and termites.

Soon, we come upon a massive tree-fall barring our way. The fall is recent, perhaps only a month old, and no detour has yet been cut. Doctor Five sets to work, slicing his way through thick lianas, and we all pitch in to help. To leave the trail in the jungles of Suriname, though, is to ask for trouble - even if it is just for a moment. My skin crawls.

I have a long history with these jungles. When I was 23, I came to study monkeys deep in the rain forest for a year. Five years later, I returned to Suriname to write a book about the place. Suffice to say, I have been lost here before - profoundly lost - and I've never been more frightened, or more amazed at how easily you can lose your bearings.

Thankfully, we avert disaster and hike on. Over the next 3½ hours, we cross a series of streams, a few of them swollen with rain and bursting their banks. We also bump into a rambunctious troupe of bearded sakis, two tapirs and a lone red brocket deer.

Eventually, we emerge from the jungle cool onto the sun-drenched West Platte, a surreal desert landscape populated by cacti and spirited lizards. From here, we get a good look at the Voltzberg itself, a granite mountain resembling a loaf of burnt sourdough puncturing the canopy. From its summit, a weary hiker can stare slack-jawed in all directions as the Guianan rain forest stretches to the horizon.

We hang our hammocks in an old research camp at the foot of the Voltz. A noisy troop of black spider monkeys passes through, each one like a hairy 12-year-old boy in the trees. We follow them for a while, but soon Doctor Five tells us it's time for dinner, and time to sleep. We must be up early, he says, or risk missing the show in the morning.

We wake long before dawn, and Doctor Five leads us back into the jungle. We go slowly by the light of our headlamps, the fear from yesterday gone. Soon the trail fades and Doctor Five bushwhacks ahead of us, following his memory to exactly the right spot. Then, in what seems the middle of nowhere, he motions for us to stop, to be quiet. We peek over his shoulder to see what he has found.

Just ahead of us, the jungle is speckled with myriad splotches of brilliant orange. It takes us a moment to realize what we're seeing, and that our search is over. Perched on slim branches and low-hanging vines are countless Guianan cocks-of-the-rock, the bizarre, elusive icons of the Surinamese jungle. Their bright orange plumage and Romanesque head-crests are startling - almost comical - against the greens and browns of the forest.

The birds are participating in a lek, one of the avian world's most remarkable courtship rituals. This is "the show" Doctor Five referred to last night. During mating season, which lasts from December to April, male and female birds assemble on a daily basis at a specific spot in the jungle. This meeting place becomes a sort of arena, where males compete with each other for the affections of the ladies. Though sparring methods differ among species, they usually involve extravagant physical and vocal displays.

As we watch, a male bird hops down from his perch and challenges another male to a frenzied dance-off. They flutter their wings, puff up their chests, extend their necks out as far as they'll stretch and make odd, cat-like noises. Meanwhile, the females watch from their perches in the low lianas, like royalty watching gladiators duel. Whichever male dances best (that is, best defends his territory) will win himself a mate this morning. We've become voyeurs in nature's strangest singles bar.

This is the largest known lekking site for the cock-of-the-rock in the Guiana Shield. Consequently, as ecotourism goes in Suriname, so goes the fate of these flirtatious birds. The more visitors pay to see natural spectacles like this one, the more likely the stage for such shows will be destroyed.

When the action slows, Doctor Five offers to lead us up the Voltzberg. We leave the birds to innuendo and begin the hard climb. At the summit, as we stare at the unbroken rain forest reaching out in all directions, I wonder how many more leks we missed this morning, and how many more birds danced well and got lucky.

Andrew Westoll is the author of The Riverbones: Stumbling After Eden in the Jungles of Suriname.

Getting to Suriname just got a lot easier: Surinam Airways ( www.slm.nl), the country's only domestic airline, now flies direct from Miami to Paramaribo, cutting out the traditional stop-over and carrier change somewhere in the Caribbean. Once in Paramaribo, you can organize a trip to the Central Suriname Nature Reserve through STINASU, the domestic conservation and tourism agency ( www.stinasu.sr). You can either fly into the park (one hour) or take a boat down the Coppename River (six hours).

A trip to the CSNR is incredible any time of year. But to catch the cock-of-the-rock leks, you must be there for mating season, which lasts from December to April. Keep in mind, this is also the rainy season.

BEST WESTERN Frederick Derbystraat 99-100, Paramaribo; www.bestwestern.com. Rooms with HBO in the capital of Suriname. Rates from $150 a night.

ROYAL TORARICA Hotel Kleine Waterstraat 10, Paramaribo; 597-473500; www.royaltorarica.com. The finest hotel in Surname. Located on the Suriname River in the middle of Paramaribo's entertainment district and a five-minute walk to the Presidential Palace. Rooms start at $170.

BIRDWATCHING To see the cock-of-the-rock and other rain-forest critters, book a three-day trip through STINASU ( www.stinasu.sr). Tours start at $545 and include accommodation in bunk beds or in private two-person forest bungalows just downriver from the Voltzberg trail. 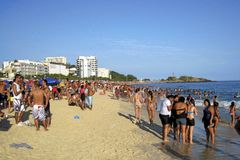 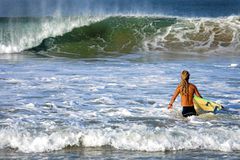