Killing grizzly bears for trophy will come to an end in British Columbia, but not before hunters get one more shot this season.

Natural Resource Operations Minister Doug Donaldson said the province is moving to ban trophy hunting for grizzly bears and will completely ban the hunt of grizzlies in the Great Bear Rainforest as of Nov. 30.

But the current season that begins in some parts of the province this week is set to go ahead, Mr. Donaldson said, because hunting permits were already issued months ago.

"The main factor was the long delay when we had a placeholder government for four months. During that time, the limited entry hunting tags were issued in June," Mr. Donaldson said, adding guide outfitters were also issued permits last December.

First Nations and other groups will be consulted about ending the trophy hunt before the bans takes effect to determine what regulations are needed to enforce the rule and how to mitigate any economic impacts.

"We recognize that there will be some loss of revenue in small communities from many aspects," he said, adding wildlife watching is an industry that could see potential growth.

The purpose of the ban isn't because the number of killings is unsustainable for the grizzly population, but largely in response to public opinion, Mr. Donaldson said.

"People in the province have come to their understanding, their point of view that the trophy hunting of grizzly bears is not a socially acceptable practice in B.C. in 2017," Mr. Donaldson said.

The ban also fits into a renewed wildlife management strategy for the province and fulfills an election promise made by the NDP, he said.

The ban will mean hunters will no longer be able to keep the head, paws or hide of a grizzly, but regulations on how to enforce that are still being developed.

The government said there are an estimated 15,000 grizzlies in B.C. and 250 are killed by hunters every year.

Of those, an average of 170 are killed by resident hunters while 80 are taken by non-residents.

But Mr. Donaldson said it's unclear how many are killed specifically for trophy because that data hasn't been tracked and it will take a year or two for the province to determine that figure.

Wildlife advocates are applauding the ban, saying hunting and habitat loss are the two biggest threats to the species.

Joe Foy of the Wilderness Committee said 4,000 grizzlies have been killed since the previous Liberal government reinstated the trophy hunt 16 years ago.

"Premier [John] Horgan is to be commended for ending this cruel and barbaric blood sport for good," Mr. Foy said in a statement.

BC Green Party Leader Andrew Weaver said while the ban is encouraging, it doesn't fully end the hunt which environmental groups had wanted.

Mr. Weaver said in a statement that the new ban is also viewed as wasteful by the resident hunting community because the hair, head and hide of the grizzlies can no longer be used.

"I'm not sure how this will appease the concerns of anyone. It appears to me that the NDP was trying to play to environmental voters in the election campaign without thinking through their policies," Weaver said.

He said the government should take a more science-based approach to species management and he is calling for the introduction of endangered species legislation, which the province currently lacks. 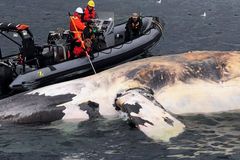 Watching whales from above, researchers race to stop more deaths in the Gulf of St. Lawrence
November 12, 2017 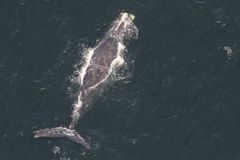