Up to 305,000 Atlantic salmon have escaped from a Washington State fish farm near British Columbia, leading a local Indigenous community to warn the release of this invasive species could devastate its fishery and wildlife officials are encouraging fishermen to catch as many as they can.

Cooke Aquaculture, the New Brunswick-based owner of the farm located about 40 kilometres east of Vancouver Island's southern tip, said on Tuesday the salmon escaped over the weekend through a net that was ripped by high tides linked to the solar eclipse, although the company said it could be days before they determine exactly how many were lost.

Washington State's Department of Fish and Wildlife is urging the public to catch as many of the fish as possible after Lummi fishers out for Chinook salmon on Sunday were surprised to pull up Atlantic salmon – escapees that turned up in their nets again on Monday.

Experts offered mixed opinions when asked about the potential impact: The chief biologist of the Pacific Salmon Commission, which manages salmon stocks under a treaty between Canada and the United States, said the release is unlikely to harm wild salmon over the long term, while an expert who has studied the impact of Atlantic salmon in B.C. waters says there is simply not enough scientific evidence to declare how these these escaped fish will affect the regional ecosystem.

Washington State considers Atlantic salmon an invasive species that could spread disease or lice to wild salmon, but notes such harmful pathogens are not prevalent in its aquaculture industry. In B.C., concerns over the spread of sea lice from open-net pens to wild populations have persisted for more than a decade. Atlantic salmon have long been farmed by the aquaculture industry in the Pacific Northwest.

Michael Lapointe, of the Pacific Salmon Commission, said the fish are unlikely to reproduce many offspring while swimming in their non-native habitat.

"Three hundred thousand seems like a big number, but if you put it in context to the populations of wild fish that are out there it's probably not that large," Mr. Lapointe said on Tuesday afternoon. "They're very unlikely to successfully reproduce and, if they do, I don't think we have any history of them returning to spawn and coming back to the same stream.

"If they took a foothold and got to be self-reproducing, that would be a significant concern."

However, John Volpe, an associate professor at the University of Victoria studying the introduction of Atlantic salmon into B.C.'s waters, said there is simply not enough evidence to declare how these these escaped fish will affect the region.

"What my research showed is that they do escape, they do survive, they will ascend rivers, they will reproduce with each other and they will produce viable offspring that are competitively equal or superior to Pacific salmon," he said.

However, he said there has been no similar research done since, so there is a dearth of data on how successful these escapees are in the wild.

"If they don't show [worn fins or scraped up snouts] then we have no idea if they've escaped earlier in their life and healed or if it's a second- or third-generation fish," he said. "You'll find a number of people that I'm sure are waving their hands up and down suggesting, as David Suzuki once framed it, a 'Wall of Death for Pacific salmon.'

"Well, there's no evidence to suggest that's the case, either."

Nell Halse, vice-president of communications at Cooke Aquaculture, said her company's fish don't have issues with lice or disease and are conditioned to eat pellets, so they don't pose a risk to smaller wild species. "Most likely, they'll be eaten by predators or be captured in this fishery right now," she said from Washington State on Tuesday afternoon.

The fish are about 4.5 kilograms each and were set to be killed in the fall and sold across North America, she said.

Ron Warren of Washington Fish and Wildlife said Cooke Aquaculture's net had some 1,360 tonnes of fish in it when it imploded on Saturday. Mr. Warren said the spill was caused by tides pushed unusually high by Monday's approaching total solar eclipse. The department has been monitoring the situation and crafting a spill-response plan with Cooke.

Lummi fishers were incensed at the Atlantic salmon intruding in home waters of native Pacific salmon.

"It's a devastation," said Ellie Kinley, whose family has fished Puget Sound for generations. "We don't want those fish preying on our baby salmon. And we don't want them getting up in the rivers."

G.I. James, a member of the Lummi natural-resources staff and fish commission, said Pacific salmon face enough trouble as it is without duelling with invaders in their home waters.

"It is potentially a disease issue and [an] impact on our fish … right now any impact to them is difficult to absorb."

With reports from The Associated Press 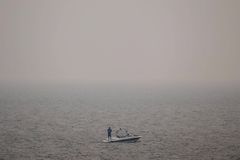