On a spring day in 1942, Roy Oshiro wrote his final, first-year exam at the University of British Columbia, where he'd enrolled with dreams of becoming a teacher.

The next day, he and his family were ordered to leave Vancouver, caught up in an internment that sent thousands of Japanese-Canadians to sugar beet farms or road crews in the Canadian government's response to Japanese attacks on Pearl Harbor and Hong Kong in December, 1941.

On Wednesday, 90-year-old Mr. Oshiro will be back at UBC, as one of 76 Japanese-Canadian students whose studies were derailed when they were exiled in 1942 and will finally receive their caps and gowns.

For Mr. Oshiro, who's traveled from Japan to Vancouver for the occasion, the tribute will be a milestone on a lifelong journey of forgiveness.

"This is one thing that will happen once in a 1,000 years," he said Tuesday in a telephone interview, warning he might throw his arms up and shout "Hallelujah" when he takes his turn across the stage.

"Never mind watching for me," Mr. Oshiro said. "It's the people who started all this – they're the ones who should get all the credit. We're just the recipients of their goodness."

The seed for today's tribute was planted in 2008, when retired Vancouver teacher Mary Kitagawa – who was sent to camps with family members during the war – wrote to UBC to suggest the school grant honorary degrees to students affected by the internment.

Ms. Kitagawa had not attended UBC herself, but was moved by accounts of such tributes at American schools.

Her request opened old wounds. Unlike some American universities that protested the inclusion of Japanese-American students in forced removals, UBC for the most part went along. Japanese-Canadian students who'd enrolled in the Canadian Officers Training Corps were stripped of their commissions by the university's Senate Committee on Military Education, with only two faculty members speaking out against the process.

The changes at UBC and in the city devastated students for whom the university had been a window into a broader, seemingly welcoming world.

Roy Handa, who died in 2002, had finished his courses and was looking forward to a convocation ceremony at UBC. Instead, he was sent to work on road crews in Ontario. Over the next few years, he had limited contact with his mother and sisters, who'd been sent to a camp in B.C., says his niece April Sora, who will accept a degree on his behalf.

After the war, he became a sign painter in Toronto and later, a seasonal fisherman in B.C., where he'd been born in Nass Harbour on the northwest coast. And over the years, while close to his nieces and nephews, he spoke little of his wartime experience and rarely of his time at UBC.

Until she learned of the campaign to track down the UBC students of 1942, "I never knew he had gone the full four years," Ms. Sora said this week from Saskatoon, before traveling to Vancouver for the ceremony.

It was her uncle, however, to whom she turned in her own university years when she was studying Franz Kafka and Albert Camus, never realizing why he knew so much about the books she was reading.

Mr. Handa's sister, aged 90, plans to watch a live webcast of the ceremony at the Japanese-Canadian cultural centre in Toronto.

The ceremony is part of a broader program relating to the exiled students that includes collecting personal accounts and developing education programs.

Mr. Oshiro, who became a teacher and spent most of his adult life as a missionary in Okinawa, Japan, says he's looking forward to seeing former UBC classmates, including some he played rugby with at Vancouver's Britannia Secondary.

"I'm just so happy I don't know how I'll contain myself," Mr. Oshiro said, adding that he's grateful to Ms. Kitigawa and others who lobbied for such recognition, which he sees as helping to educate people about a difficult time in Canadian history. "They are the ones who worked in the dark all these years and got this thing going."

A bittersweet tale of two wartime histories
May 8, 2018 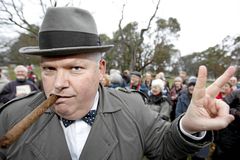