The Kitselas First Nation has signed a key benefits agreement with the B.C. government, making it the third Tsimshian group to formally back a major project to export liquefied natural gas from the Port of Prince Rupert.

Government and Indigenous leaders said Thursday that having the deal in place will help Pacific NorthWest LNG's decision-making process as it ponders whether to press ahead with building an $11.4-billion liquefaction terminal on Lelu Island.

Joe Bevan, the elected chief of the Kitselas, announced the agreement on Thursday during a Vancouver news conference with B.C. Aboriginal Relations Minister John Rustad.

"Building on good partnerships of course will help ensure the success of B.C.'s emerging LNG industry. As a proponent, Pacific NorthWest LNG has shown real leadership in this regard," Mr. Rustad said.

According to the benefits agreement between the Kitselas and B.C. government, the First Nation will receive payments totalling $13.35-million and 1,227 hectares of land.

While the benefits pact is a boost to Pacific NorthWest LNG, it also covers the impact of LNG developments on the Kitselas along British Columbia's north coast, notably in the Prince Rupert and Kitimat regions.

The Kitselas also reached an aboriginal reconciliation deal with the province, bolstering the odds of signing a final treaty.

"We are pleased today to sign these agreements with B.C. that reflect a sharing of benefits, creation of employment and the development of business opportunities," Mr. Bevan said.

The Pacific NorthWest LNG consortium led by Malaysia's state-owned Petronas is scrutinizing various aspects of the design plans, including the possibility of constructing dock facilities on Ridley Island instead of Lelu Island. The group is expected to make its final investment decision later this year, months after the May 9 B.C. election.

"An IBA which ensures that the Kitselas community can enjoy the benefits from the project such as skills and capacity training, access to employment and business opportunities and annual support payments for the life of the project," Mr. Badrul Hisham said.

Last month, the Lax Kw'alaams and Metlakatla First Nations reached IBAs with Pacific NorthWest LNG. Two other Tsimshian groups, the Gitxaala and Kitsumkalum, are expected to be next in line to sign such pacts.

Another Tsimshian group, the Gitga'at, is upset at the B.C. government's previous consultation process, which excluded the First Nation from being fully recognized in a provincial environmental assessment of Pacific NorthWest LNG.

Mr. Rustad said the B.C. government has agreements with the "major three" – the Lax Kw'alaams, Metlakatla and Kitselas, and he is hoping to have all six Tsimshian groups aboard in future.

"When the companies are sitting around thinking about how to progress with the project, one thing they do look at is the level of support from local First Nations and how the project will be received," he said.

Environmentalists, some aboriginal leaders and a group of scientists warn that if the Lelu Island terminal is built, the result will be devastating for juvenile salmon that rely on an ecological nursery called Flora Bank, located in the Skeena River estuary.

A much-delayed project slated for Kitimat, LNG Canada, is led by Royal Dutch Shell PLC. Three weeks ago, Shell cancelled its plans for an LNG terminal on Ridley Island.

Industry experts caution that with low prices for the fuel in Asia and a global glut of supplies, proponents in B.C. face years of losing money.

The shaky economics have cast doubt on whether any of the 19 LNG projects pitched and still active in B.C. will be built. 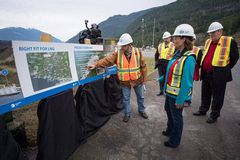 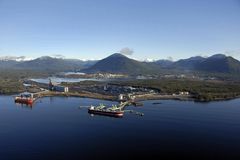