On a clear day, from a sombre observation post in the demilitarized zone not far from Seoul, it is possible to look across the bleak, grey-and-brown landscape of North Korea and gaze upon the Kaesong Industrial Complex – which has long been a symbol of co-operation between the two Koreas.

The industrial area, which sprawls over 10 hectares, opened in 2004 and was a lasting physical reminder of the hopeful so-called "Sunshine Policy" that started in 1998 and lasted for about a decade. On a basic level, the complex at Kaesong allowed South Korean firms to take advantage of an extremely cheap North Korean labour force, while simultaneously allowing North Koreans a chance to work at something resembling an actual job that would exist in a capitalist economy – and earn cash with which they could support families, in a country where there is still a lot of malnutrition and occasional starvation.

On a broader level, the industrial park was a high-profile attempt to defuse tensions between Seoul and Pyongyang, to help bring a semblance of integration to two vastly different countries – with strikingly different economic fortunes and political systems. It was a classically liberal attempt at peace through economic integration, and was meant to help lay the groundwork for a slow but gradual process of reform and opening in the north, perhaps one day helping lead to Korean unification.

And now, unfortunately, it is closed.

South Korea shuttered the joint industrial park this week because of an alarming increase in recent provocations from the North: First, a test of a powerful hydrogen bomb; and then, over the weekend, the launch of a rocket that carried a satellite into orbit, one which could, many suspect, one day help guide intercontinental ballistic missiles to the cities of North America. That is, if the satellite actually worked properly. U.S. officials suggest it is simply tumbling in orbit, rendering it as useless as trying to justify the ongoing rule of Pyongyang's wretched Stalinist dictatorship.

South Korea's leaders in Seoul, who unenviably have to negotiate possibly the trickiest cross-border policy in the world, said they were left with very little choice. And one official noted the hard currency Pyongyang earned through the jointly run industrial park did not exactly flow to making the lives of North Koreans better; in fact, it almost certainly flowed into propping up the North's militarist ambitions, and perhaps even into its nuclear efforts. South Korea's Ministry of Unification, which works on issues with the North, said Pyongyang received about $120-million (U.S.) from the operation last year – and has obtained roughly $560-million since the complex opened in 2004.

As a result of Seoul's move, North Korea predictably engaged in a tit-for-tat over the Kaesong site (which is also spelled Gaeseong), announcing on Thursday it was freezing assets and booting out South Korean managers who lived there – allowing them to take only their personal belongings.

This is not the first time Kaesong has borne the brunt of strife between the two capitals. In 2013, as tensions rose, the North's leaders decided to withdraw its workers and the site was temporarily closed for about five months. Whenever flareups or outbursts of violence, such as the sinking of the South Korean navy's Cheonan corvette in 2010, cause a rift in relations, various crossborder efforts are generally the first thing to go.

These limited exchanges – the delivery of humanitarian aid, the delivery of letters between divided North and South Korean families or even rare in-person meetings between aging separated family members – are the only meaningful levers the two governments have, short of declaring war, or simply hurling rhetoric. There have been minor quibbles with Kaesong, including over taxes, in the past, but this time, the lever was yanked sharply.

The closing of Kaesong is bad for a number of reasons, and reveals just how intractable relations are between the North and South. Quite obviously, reducing any of the already-limited levers available to policy-makers is bad for the peninsula's citizens, North or South, and heightens the risk of violence by narrowing leaders' options for retaliation – at a time when North Korea is becoming increasingly belligerent and unpredictable.

But besides the simple matter of wages for poor North Koreans, there is also the not insubstantial sense of communion between creating a work force composed of both South and North Koreans – a small taste of what unification might be like, however unlikely. And that was significant. People outside of the Korean peninsula – and outside of Washington and Tokyo, where these matters are treated extremely seriously – often make the mistake of seeing North Korea as some sort of joke, because of the isolated nation's portrayal in Western pop culture. But nothing about North Korea is funny, and the division of aging, and dying, relatives by the DMZ is a searing reminder that gives unification a sense of urgency that many outside South Korea simply do not understand.

That urgency, combined with the fleeting and euphoric glimpses of what Korean unity might actually look like, also gives cross-border tensions – even if it's just the closing of a mundane industrial park – a sense of being part of one long, pointless and utterly anachronistic tragedy.

North Korea’s rocket launch heightens tensions around the world
May 16, 2018 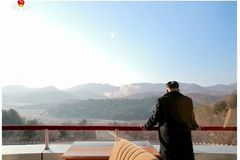