The British press, it may fairly be said, are not generally known for their restraint. But if, upon landing in Toronto for this weekend's kickoff of Prince Harry's Invictus Games, they seem less rabid than usual, it may be because the event is likely to include the economic collapse of one of their most valuable commodities.

Most royal watchers expect the Games to mark a coming-out of sorts for Harry and his girlfriend, the Toronto-based American actress Meghan Markle, who stars in the TV show Suits. Which means that, after almost a year of five-figure bounties promised by editors for elusive photographs of the couple, whose relationship became public last October, the press's cup (and its pages) will likely runneth over by the time the Games wrap up on Sept. 30.

Read more: Invictus Games: A soldier's path from golf course to battlefield and back again

If the couple does indeed step out together, the value of tabloid photos of them is expected to plummet from what one industry veteran pegged at "tens of thousands of pounds" to a few hundred quid.

Already, canny media management has broken the fever for information on Markle that had been building after the Sunday Express broke the news last fall about the romance, which spurred a rush to uncover details about her upbringing, career and former partners. (The reporting became so intrusive that Kensington Palace issued a statement appealing to the press to cool it.)

During the summer, the actress quietly granted an interview to Vanity Fair, which was posted earlier this month alongside a gallery of glamour shots by the fashion photographer Peter Lindbergh. In the interview, the magazine's October cover story, Markle speaks in bland and upbeat terms about the relationship – "We're two people who are really happy and in love," she says – but even that was apparently enough to help blunt the press's interest.

The interview and its timing was "led very much by Harry himself," suggested Duncan Larcombe, the former royal editor of The Sun, who quit the paper last year to write Prince Harry: The Inside Story and is now a director of Zest, a marketing and public-relations agency based in Kent, England.

"There hasn't been precedent for that sort of interview," he added, noting that, in the case of the eight-year courtship of Prince William and Catherine Middleton, the couple didn't speak about the relationship until after announcing their engagement.

"Nothing in the royal world happens by accident. It's all carefully planned. [The Vanity Fair interview] was very strategic, in my view."

With the interview, "she's making a public declaration, and that spikes the guns of the press," he said, referring to a 17th-century tactic used to disarm cannons. "She's saying, 'We're in love, that aspect of our lives is private, but we are: So what?' That's brilliant, from a PR point of view."

Joe Little, the managing editor of Majesty magazine, agreed. "We know now from the horse's mouth they're in love. So I think the background digging, for want of a better way of putting it, is over and done with, and people will just be looking and keen to see her at the Prince's side."

Larcombe said that it would be a masterful move to let people see that for themselves. "The best thing that Prince Harry and Meghan could do right now is to be photographed thousands of times," he suggested.

"The worst thing that could happen on this trip is, Meghan hides away and then is still not photographed by Harry's side at an official event. That would put the bounty up even higher on the value of a paparazzi photograph. And there is nothing on the planet that Prince Harry hates more than the paparazzi. He feels they're responsible for killing his mother – with a certain degree of justification, in my view."

Still, there is disagreement within the press corps over whether Markle will indeed appear. Kensington Palace, as is its habit, does not address such rumours, or even tip off the press to a photo opportunity if it were about to happen.

"I just have a feeling that Prince Harry wouldn't want his personal life to get in the way of the coverage of the Invictus Games," said Little. "So, I would suggest that, if Meghan is there, it'll be in a fairly low-key capacity." He hastened to add: "But time will tell; I may end up eating these words."

And the press pack – more than 30 British outlets have been accredited, from the BBC to the tabloids – is obligated to turn up to the Games, anyway.

"As a royal correspondent, there's an impetus to show interest in Harry's charitable endeavours," notes Camilla Tominey, the Sunday Express royal editor and columnist who broke the story last October about the Prince's relationship with Markle. "He might be walking around, you might get a little chat with him, that might make for the paper. The theory goes, you've got to be in it to win it." 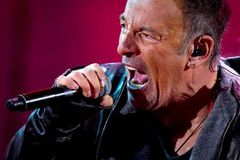 Prince Harry says no one in royal family wants throne
June 22, 2017
Follow Simon Houpt on Twitter @simonhoupt
Report an error Editorial code of conduct
Due to technical reasons, we have temporarily removed commenting from our articles. We hope to have this fixed soon. Thank you for your patience. If you are looking to give feedback on our new site, please send it along to feedback@globeandmail.com. If you want to write a letter to the editor, please forward to letters@globeandmail.com.
Comments