A Canadian affiliate of the Clinton Foundation that has raised millions from mining executives has spent far more on salaries and administrative costs than charitable programming in the two most recent years for which numbers are available, according to financial statements from the Canada Revenue Agency.

The Clinton Giustra Enterprise Partnership (Canada), a registered charity based in Vancouver, B.C., devoted $737,441 — amounting to 78 per cent of its expenditures — to management and administration in 2014. The amount includes spending on office supplies and expenses, salaries and professional and consulting fees.

That same year, according to the return filed to the Canada Revenue Agency and published online, the organization devoted $205,419 to charitable programs, accounting for 22 per cent of its expenditures.

A similar ratio — 72 per cent to management and administration costs and 28 per cent to charitable programs — is in the 2013 return.

The Canadian charity strongly defended against any suggestion it is spending too much on overhead.

"It is incorrect to look at one-year expenditures in a vacuum," the charity wrote in an emailed statement in response to a request for an interview.

The Canadian charity was founded by Frank Giustra, a Canadian philanthropist and mining financier who raised more than $16 million in pledges for the initiative at a star-studded 2008 fundraising gala in Toronto, where former U.S. president Bill Clinton spoke to more than 1,000 guests from Hollywood, Bay Street and the mining industry.

It was set up primarily so that Canadians could receive a charitable tax receipt for supporting the work of a Clinton Foundation initiative that bears the same name. That initiative is currently focused on creating sustainable business opportunities in the developing world, such as helping peanut farmers in Haiti or providing sales training to women in Peru.

The Canadian charity said it would be more accurate to look at the aggregate numbers for the period from 2010 to 2014, because its work involves projects whose funding is spread out over time.

Those overall numbers show that spending on charitable programs and gifts to other charities was 84 per cent, whereas 14 per cent was spent on management and administration and two per cent on fundraising, the charity said — calculations verified by The Canadian Press.

It also said that so far this year, it has committed a total of US$4.3 million to charitable programs, US$3.2 million of which has been disbursed.

The 2014 return shows revenues of $157,154 from charitable gifts that year — significantly lower than the $6.8 million it received in donations in 2010, for example — but the charity explained it is currently focusing on program delivery rather than soliciting new funds.

The charity said its 2015 financial statement has not yet been audited or reported publicly, but does not expect there to be any "major differences" in the ratio between money spent on charitable programs and management and administration from what was seen in 2013 and 2014, when it said ongoing charitable programs were funded by money disbursed in previous years.

"These expenditures — far from being overhead — are critical to the operational success of CGEP's work, and help maximize the impact of CGEP's programs; ensure that more people are reached; and that these programs are run in an effective way," the statement said.

The charity said its staff in Canada — four full-time positions in 2014, according to the return — works on "partnership development and marketing, investor prospecting, and finance" in co-ordination with the American-based team.

The Canadian charity would not provide the name of the spokesperson who communicated by email with The Canadian Press.

It also emailed a letter from Toronto-based lawyer David S. Brown, who said the charity firmly expects the facts in its response would be reported to the public in a way that is accurate, forthright, not misleading and "does not tarnish the good charitable works in which our client is engaged".

The issue of so-called overhead spending — and whether charities should be judged or compared by how much of it they have — is a hot topic in charitable giving circles, with many arguing that more attention should be paid to the impact an organization has than to how much it pays its employees.

The Canada Revenue Agency says it has no rule on what constitutes an ideal ratio.

"Overall, with respect to any charity, we would look at the whole of its operations to determine if it continues to comply with the requirements of the Act," CRA spokeswoman Jelica Zdero wrote in an emailed response to questions.

Mark Blumberg, a Toronto-based lawyer who specializes in charity law, said an organization should anticipate questions about its finances, especially when it deals with politically sensitive people and issues, and go beyond the minimum requirement of a financial statement published on the CRA website.

CGEP Canada came under scrutiny last year after it was revealed it had not disclosed the identities of roughly 1,100 donors.

This was controversial because in 2008, the Clinton Foundation signed an ethics agreement with the administration of U.S. President Barack Obama that it would reveal the identities of all its contributors as a way to avoid the perception of conflicts of interest when Hillary Clinton became secretary of state.

Both the Clinton Foundation and CGEP Canada have said that Canadian law would prevent them from disclosing the identities of people here in Canada without their prior consent.

CGEP Canada does not provide general operating support to the Clinton Foundation.

Since then, CGEP Canada has sought and received permission from some of its contributors, listing 30 individuals and corporations that had donated more than $100,000 on the website of the American initiative.

Only a handful responded to a request for comment from The Canadian Press, with none commenting on the ratio. 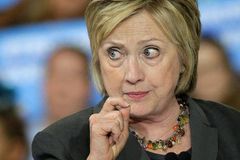 Opinion
All that stands between us and the abyss is – help us – Hillary Clinton
May 16, 2018