The Ontario government says it will maintain a cap on increases to undergraduate tuition of 3 per cent a year for the next two years, and promises that institutions that don't meet student learning outcomes under a new funding formula will not see their grants cut.

"We are committing for now to keep everyone whole," said Deb Matthews, Deputy Premier and Minister of Advanced Education and Skills Development. "We are trying to do a few things at once and we don't want to add instability to the mix. In time, we will see more variation depending on performance," she said.

A year ago, the government released a report it had commissioned that recommended it link a higher portion of its funding for postsecondary education to students' learning experiences. Doing so would help redress a perceived decline in the quality of undergraduate education, the report said.

Currently, only about 4 per cent of the province's $3.5-billion in grants to universities depends on outcomes like graduation or retention rates.

Moving slowly to change the funding formula and maintaining the status quo on tuition means that the Liberal government – set to battle for its political future in 2018 – will have one less issue to manage. The government's goal, the minister added, is to successfully roll out its changes to financial aid for postsecondary education.

"Our big priority is making sure that we get the transformation of OSAP right," Minister Matthews said. "Kids in poverty have a 25 per cent chance of going to postsecondary compared to high-income people and that's leading to a lot of wasted potential."

The government is redesigning financial aid to ensure that it covers average university and college tuition for students from families earning less than $50,000 a year. It recently unveiled an online calculator where students can see how much money in grants and loans they will receive toward their studies.

Performance metrics will begin to be introduced in the fall of 2017 after the government consults with universities as part of a second round of strategic mandate agreements, which set out each institution's strengths.

No university will see its grants decline if it fails to reach certain standards. That's because many universities, particularly those in more remote parts of Ontario are already struggling with drops in enrollment, the Minister said.

Colleges had lobbied to be allowed to raise their tuition by approximately $200 a year, arguing that the 3 per cent cap has left them with some of the lowest college fees in the country. (Fees for graduate and professional programs can increase by 5 per cent a year).

"It's great to give students access to higher education, but if the institutions are starved of resources they are not going to be able to continue to provide the right programs, with the right technology, to train students for the jobs they need," said Linda Franklin, the President of Colleges Ontario.

Some programs could close as a result of the continuation of the cap, she said.

"It's a very challenging situation to have university tuition going up at $180 a year and college tuition at $80 a year, that does not close the funding gap."

At the same time, changes to how institutions are funded mean that the province will limit the amount of money it will give institutions that grow their numbers beyond a set amount and offer some compensation to those where enrollment falls short of expectations. Colleges had lobbied for such a change.

Student groups said they welcomed the development of performance metrics which could enable some comparisons across institutions.

"A lot of data is being collected but it is not being centralized," said Jamie Cleary, the president of the Ontario Undergraduate Student Alliance. The group wants to see how different schools use teaching evaluations, what are class sizes and how many students are participating in co-op programs at each school. "That will give us the ability to make informed decisions on where the money is going," he said. 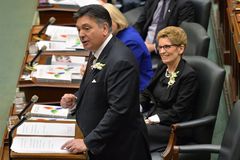 Ontario university profiles to help you choose
April 6, 2017
Follow Simona Chiose on Twitter @srchiose
Report an error Editorial code of conduct
Due to technical reasons, we have temporarily removed commenting from our articles. We hope to have this fixed soon. Thank you for your patience. If you are looking to give feedback on our new site, please send it along to feedback@globeandmail.com. If you want to write a letter to the editor, please forward to letters@globeandmail.com.
Comments