U.S. President Donald Trump threatened to kill NAFTA in a face-to-face meeting with Justin Trudeau, saying "it will be fine" if the trade agreement died.

Hours later, Mr. Trudeau acknowledged for the first time that the 23-year-old trade deal between Canada, the United States and Mexico that has fuelled massive export growth could fall apart.

Mr. Trump raised the prospect on Wednesday of terminating the North American free-trade agreement as Mr. Trudeau sat directly beside him in the Oval Office – with the U.S. President also hinting he might pursue a separate deal with either Canada or Mexico if the talks implode.

What's on Trudeau's agenda in Mexico, and what's at stake for NAFTA? A guide

Catch up: Globe reports on NAFTA in Mexico, Tennessee, Kansas and more

"It's possible we won't be able to make a deal, and it's possible that we will," Mr. Trump told reporters gathered in the Oval Office, as Mr. Trudeau sat silently with his hands crossed.

As the fourth round of trade talks gets under way in nearby Arlington, Va., Mr. Trudeau travelled to the White House on Wednesday to seek clarity from Mr. Trump, who has previously threatened to tear up the trade deal but also to simply tweak it. Instead, Mr. Trump was vague about his support for NAFTA, which he said he has opposed "for a long time."

Although he insisted he still believes a deal can be done with the Trump administration, Mr. Trudeau said he realizes the U.S. President can make surprising decisions and might do so with NAFTA.

At a press conference later in the day, Mr. Trudeau continued to defend the need to modernize NAFTA. But he acknowledged the circumstances surrounding the renegotiations "are often challenging" and vowed to stand up for Canadian interests no matter what happens.

"We have to be ready for anything, and we are. We're taking this very seriously," Mr. Trudeau said, as he stood atop the Canadian embassy, overlooking the Capitol.

"I think Canadians are aware that the American administration, and the President, makes decisions that surprise people from time to time. And that is certainly something that we are very much aware of, and very braced for, and conscious of," he later said. "We know that there is a certain level of unpredictability these days."

It was a sentiment echoed by former prime minister Stephen Harper, who told a Washington panel discussion on Wednesday that it is now "conceivable" that Mr. Trump could cancel the deal.

Still, Mr. Trudeau said he remained upbeat about the possibility of renegotiating the agreement because it benefits the North American economy. "My optimism towards NAFTA, towards a renegotiation, isn't based on personality or reading political tea leaves," he said. "My optimism is based on the fact that I know how good NAFTA has been for millions of citizens."

In a rare moment of tough talk, Mr. Trudeau said he spoke with Mr. Trump about the U.S. Department of Commerce's recent decisions to slap 300-per-cent duties on Canadian plane maker Bombardier for its C Series airliner after legal complaints from U.S. company Boeing.

"I highlighted to the President how we disagree vehemently with Commerce's decision to bring in countervailing and anti-dumping duties against Bombardier, that we feel that this is not something that is warranted," Mr. Trudeau said.

"I certainly mentioned that this was a block to us … making any military procurements from Boeing."

In this round of NAFTA talks, the United States is expected to hit Canada and Mexico with tough demands on so-called rules of origin for autos, including a requirement that all cars and trucks made within the NAFTA zone contain at least 50 per cent American content in order to be bought and sold tariff-free between the three countries.

U.S. negotiators are also set to take aim at Canada's supply-management system, which fixes prices for milk, eggs and poultry. Time has also been blocked off for talks on trade remedies, which could include the Chapter 19 dispute-resolution panels Canada and Mexico are fighting to keep against U.S. attempts to scrap them.

Commerce Secretary Wilbur Ross said on Wednesday that talks had so far mostly focused on easier topics and will now shift to tackling harder matters. He also said the new NAFTA will have 28 chapters.

Mr. Ross vowed that the United States will win tougher rules of origin.

"I think that you will find we will get increased percentages in the rules of origin and I think you'll find the car companies will adapt themselves to it," he said at an event with former Canadian industry minister James Moore at Dentons law firm offices in Washington.

Mr. Ross acknowledged the apoplexy among U.S. industry over the White House's economic nationalism and said Canada was "trying to stir up trade groups in the U.S. to have the U.S. go easy in the negotiations."

Earlier on Wednesday, the Republican chairman of a powerful trade committee on Capitol Hill told Mr. Trudeau that he wants NAFTA talks to succeed, but the United States should get more access to Canada's dairy industry.

Kevin Brady, a Republican congressman from Texas, told Mr. Trudeau before a meeting with the U.S. House committee on ways and means that Canada and the United States have to make progress on a variety of issues, including dairy. The bipartisan committee has jurisdiction over all taxation and tariffs and is responsible for implementing any changes to NAFTA.

"Our committee, who you are with today, has constitutional responsibility for trade. It's dedicated to ensuring these negotiations are successful," Mr. Brady told Mr. Trudeau during brief remarks before a private meeting with the Prime Minister.

"To do that, we need to make progress on issues such as customs barriers, border, intellectual-property protection and greater market access for U.S. dairy producers."

A spokeswoman for Canada's dairy industry said the country has a significant trade deficit with the United States on dairy, and the group expects the government to fight for supply management in the NAFTA talks.

"Canada's Prime Minister and his cabinet have clearly expressed their support and willingness to defend the dairy industry and supply management, and dairy representatives will attend every round of the renegotiations of NAFTA to ensure that their actions continue to match their words," Dairy Farmers of Canada spokeswoman Isabelle Bouchard said in a statement.

With reports from Eric Atkins and The Canadian Press 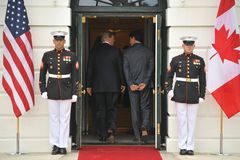 Opinion
Why Justin Trudeau is on a Save-the-NAFTA tour Subscriber content
October 12, 2017 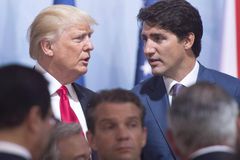 Trudeau meets Trump in Washington: A guide to his day of talking NAFTA
November 12, 2017 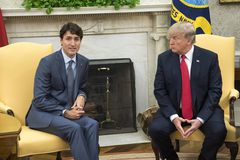 Follow Laura Stone and Adrian Morrow on Twitter @l_stone @adrianmorrow
Report an error Editorial code of conduct
Due to technical reasons, we have temporarily removed commenting from our articles. We hope to have this fixed soon. Thank you for your patience. If you are looking to give feedback on our new site, please send it along to feedback@globeandmail.com. If you want to write a letter to the editor, please forward to letters@globeandmail.com.
Comments