The new study complicates our understanding of the complex cocktail of chemicals the bears are exposed to as they try to adapt to changing climate, said Environment Canada researcher Robert Letcher.

"For many of these newer compounds, there isn't a lot of toxicological information," he said.

Biologists have long known that polar bears as well as other arctic animals carry toxic chemicals known as persistent organic pollutants — or POPs — in their bodies. Those chemicals, which include substances such as PCBs, damage immune, digestive and reproductive systems.

Many of those pollutants are restricted under the 2001 Stockholm Convention. New chemicals have been added since, including substances used for everything from flame retardants to pesticides.

Those new chemicals were among a group of 295 POPs that Letcher and his colleagues tested for. They found a total of 210 of them "with some frequency" in fat and liver samples collected from 41 bears that had been harvested in 2013-14 from the western and southern shores of Hudson Bay.

The fact they've been found in a top-of-the-food-web predator like polar bears suggest they're widespread in the environment, said Letcher.

"If a compound can migrate its way through the food web, all the way up to the polar bear, it must be pretty extensive."

The levels of contamination vary widely among the chemicals.

Most are found in the range of parts per billion. Some, such as one chemical used as a water repellent for fabrics, are approaching parts per million.

It's hard to know what their impacts are on the bears, said Letcher. Most of what we know about these chemicals come from lab tests.

"It's really hard to extrapolate from a lab rat to a completely different species in the wild. We don't have cause-effect evidence."

It's similarly hard to generalize about trends.

Some of the contaminants such as PCBs or DDT were covered under the original Stockholm Convention and have long been in decline. Levels of flame retardant chemicals, added to the Stockholm list in 2009, also seem to be dropping.

Others don't seem to be declining at all, despite being added to the convention's list nearly a decade ago.

Letcher is conducting further research using stored samples of bear tissues to get a definitive idea of what's been happening over time with the various contaminants.

But the fact none of the contaminants seem to be increasing is evidence that international pollutant agreements such as the Stockholm Convention do what they're supposed to, Letcher said.

"There's no doubt about that. Generally, the result is that right across the board levels have been decreasing over the years, which is the power of that regulation on a global level."

It's tough to ban a chemical outright, said Letcher.

Europe may ban something that is produced in large quantities in China. As well, as environmental concerns force one chemical out of the market, industry comes up with something similar to do the same job.

And understanding the impact of the chemicals is further complicated by the context of Arctic climate change.

"If there's any stressing factor to life in the Arctic, it is climate change," Letcher said. "It's a major challenge for us to understand how climate change variables are affecting contaminant exposure." 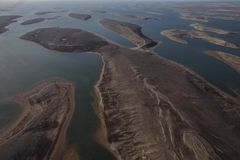 James Bay First Nations attending workshop on dealing with polar bears
April 14, 2017
Video footage scanned for clues in death of Winnipeg zoo polar bear
August 1, 2017
Report an error
Due to technical reasons, we have temporarily removed commenting from our articles. We hope to have this fixed soon. Thank you for your patience. If you are looking to give feedback on our new site, please send it along to feedback@globeandmail.com. If you want to write a letter to the editor, please forward to letters@globeandmail.com.
Comments