Nova Scotia is overhauling its abortion policies, making the abortion pill available at no cost and removing the requirement for a physician's referral to obtain a surgical abortion.

The province has been criticized as having some of Canada's biggest abortion-access barriers, and Premier Stephen McNeil said Friday the changes are about providing women with the health care options they deserve.

McNeil, who is Roman Catholic, said he is comfortable with the decisions as a parent of a daughter who "deserves to have access to health care."

McNeil was asked whether he thought it would be a tough sell to certain segments of the public.

"It's not a question about selling, it's about doing what's right and we believe women deserve access to this health care and we will do so."

The government's announcement was made by Kelly Regan, the minister responsible for the status of women, who said the province would make Mifegymiso available by prescription starting in November.

The drug combination can medically terminate an early pregnancy of up to 49 days.

"This is important for me because I believe and this government believes in the reproductive rights of women," said Regan.

"Women will now be able to get the entire cost of it covered," said Regan. "If they already have a health benefits plan we would ask them to use that and then any remainder the government will cover. If they don't have a health plan we will cover that cost."

Regan said out-of-province students who are covered through university health plans will be able to access the service, although there are no plans at this time to cover residents who do not have a provincial health card as is done in Alberta.

She said the province is also removing the requirement for a physician's referral to obtain a surgical abortion, allowing women to refer themselves to the unit at the QEII Health Sciences Centre in Halifax. Nova Scotia has been the only province in Canada requiring women to obtain a referral.

"They will be able to self-refer for these services in the future," she said.

Melanie Mackenzie, who came forward to The Canadian Press last month to describe her difficulties obtaining an abortion in Nova Scotia, said she's relieved the government has waived the referral rule.

"It gives women the option of getting an abortion without having to jump through hoops," she said. "The shame and stigma of being doubted by the medical community was extremely difficult."

MacKenzie said it was hard becoming the "poster child" for abortion issues in Nova Scotia, and that she's faced some "negative repercussions."

But she said she's been heartened by the number of women who have reached out to her to share their own stories, and that the province is improving access to abortion services.

Kim Munroe, the Nova Scotia Health Authority's director of ambulatory care, said the QEII has same-day appointments for any woman who requires an abortion.

"We are actually setting up a self-referral process as well, which will go hand-in-hand with this, but we currently provide same-day appointments for women who require an abortion service."

However, ultrasound wait times have been an issue in the province and could pose a problem given that Mifegymiso is a time-sensitive drug — it must be taken by seven weeks gestation.

Health Minister Randy Delorey said the province's health authority is working to ensure women will get access to ultrasounds when they need them, regardless of where they live in the province.

"I don't believe we are in a situation to guarantee in every situation that every individual would get same-day access to an ultrasound," said Delorey. "On the operational side we will see what if any changes would need to be made to the system when this rolls out."

Lianne Yoshida, medical co-director of the QEII's Termination of Pregnancy Unit, said she's in talks with senior officials to obtain an ultrasound machine for the unit, something that would speed up the process.

"I'm trying to be very hopeful," she said. "They are not ignoring the ultrasound issue at all. They are looking at it."

Mifegymiso, an alternative to surgical abortion, is a combination of the drugs mifepristone and misoprostol. It can be used to terminate pregnancies at an early stage, up to seven weeks from the start of a woman's last menstrual period.

Women in Ontario were able to get the abortion pill for free with a prescription as of Aug. 10 at participating pharmacies with a valid health card and prescription.

Earlier this month, it was made available under Saskatchewan's prescription drug plan, with the cost based on women's individual drug coverage and eligibility through benefit programs.

New Brunswick and Alberta also cover Mifegymiso, and the Quebec government has said it hopes to do so.

The Nova Scotia Health Authority is also setting up a phone line for women to make appointments and seek advice.

— With files from Brett Bundale. 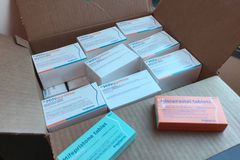 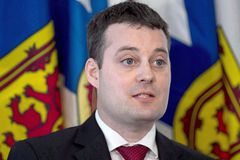 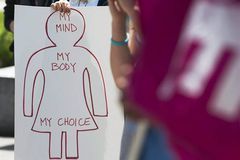