The federal government will tackle the nation's skills mismatch by overhauling an existing jobs program. While the reforms will give businesses a freer hand to get workers trained as they see fit, it will force the provinces to pony up money and cede control over skills development to Ottawa.

The Canada Jobs Grant, which will replace the current Labour Market Agreements in the 2014-2015 fiscal year, is the centrepiece of the government's attempt to deal with the growing number of jobs that are going unfilled even as unemployment remains around 7 per cent.

"Employers are very much seeking people with the right skills," Finance Minister Jim Flaherty told reporters. "We are trying to get to the point where training means jobs, not just training. We need employers involved in that."

The plan also signals the direction in which the government sees the labour market going in the future. The country needs more people in the skilled trades as well as in practical professions, such as engineering and architecture, the budget says.

The LMAs, which began in 2007, provide $500-million annually to the provinces to aid job seekers who do not qualify for employment insurance. Provincial governments have spent the vast majority of that money on services such as job counselling.

The government will rejig the program to provide money to help companies train workers. To get the funds, provinces and employers will have to kick in their own dollars, which the federal government will match up to $5,000.

Companies can access the money in different ways. A company could apply for the grant to retrain a current employee to take on a new job or use the money to train a group of new hires.

The training, which is projected to help 130,000 people, will be delivered through colleges and union organizations.

The new arrangement could portend an even larger shift. The budget says the government will also look to reform the nearly $2-billion-a-year Labour Market Development Agreement, which helps job seekers who qualify for employment insurance. Although it is not clear exactly how it will be reformed, the budget indicates the larger program will be retooled along similar lines as the Canada Jobs Grant.

Economist Don Drummond said businesses will likely take the government up on its offer – the largest barrier will be getting provinces to accept Ottawa telling them how to manage training. "I think the federal government hurt their case by being so specific with how it would work," he said.

Ontario Finance Minister Charles Sousa said his government already runs successful job skills programs – he said Employment Ontario has helped more than 90,000 companies find employees – and if the federal government imposes its own model, other programs may have to be cut to match the funding. But he signalled he was ready to make a deal with the federal government in order to get the much-needed cash.

"We have to have a meeting of the minds. We need to have a concerted approach," he told The Globe and Mail in an interview. "We need to have that funding continue and we'll do the transition as required."

Alberta's Progressive Conservative government responded positively to the budget, but Finance Minister Doug Horner said it was not clear where money for the program would come from. "We don't have any new money for these types of programs, so we'll assess where that's going to impact us," he said.

Businesses, meanwhile, said such a program is just what they need.

"We've been strongly supportive of increased focus on training and apprenticeship programs for Canadian workers," said David Collyer, president of the Canadian Association of Petroleum Producers, an industry that has been particularly hard-hit by the shortage in skilled trades. "It's clearly dependent on the provinces also stepping up to the plate but I think they see … this as a significant issue as well."

Jayson Myers, chief executive of Manufacturers and Exporters, said manufacturers also face a skilled-worker shortage, citing one Ontario member who had to turn down $50-million worth of business because he didn't have enough people to handle the workload.

The job landscape: Where workers are needed, and where they aren’t
May 11, 2018

Harper government ties training to welfare for natives on reserve
May 11, 2018 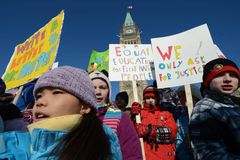 Some provinces chafing at cost implications of Ottawa’s job-training plan
May 11, 2018 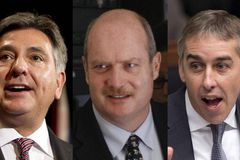 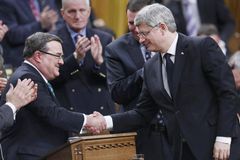