Convicted al-Qaeda terrorist and murderer Omar Khadr could be paroled in Canada as early as mid-2013 should the Harper government approve a transfer request for the Guantanamo prisoner that's now landed on the desk of Public Safety Minister Vic Toews.

It's not a scenario the tough-on-crime Harper government relishes, but it's a possibility the Conservatives are preparing for nonetheless.

The federal government announced Wednesday that it had received a formal request from Mr. Khadr to serve the remainder of his sentence in Canada – instead of a U.S. detention centre in Guantanamo Bay, Cuba.

The Harper government, which has already assured the Americans it would be "inclined to favourably consider" such a request, went to great lengths to frame a prospective repatriation as a move made after coaxing from the United States.

Canadian government sources told journalists that Washington "basically asked Canada for a diplomatic favour" in repatriating Mr. Khadr, one of this country's most notorious citizens.

The U.S., they said, "needs to get rid of this guy for their own reasons."

American officials made it clear Wednesday they had reservations about this narrative.

Canadian officials also told reporters that the United States has offered to pay Mr. Khadr's transport home. "Should Minister Toews accept, they're going to fly him here on their dime," one government source said.

The American government, they said, "is bending over backwards to make that happen."

U.S. officials reached Wednesday declined to comment on the back story Canadian officials were spinning about the politics behind repatriating Mr. Khadr but indicated they were irked by the suggestion that Washington was pressuring for the convict's return to Canada.

President Barack Obama wants to close the U.S. government's Guantanamo centre but American officials said they're not rushing Canada to take back Mr. Khadr. The facility still holds about 170 people.

As part of a plea-bargain deal in October, 2010, Mr. Khadr agreed to plead guilty to multiple charges, including murder and terrorism, in return for an eight-year sentence, only one of which was to be served at the U.S. naval station on a leased base in Cuba. This included confessing to throwing a grenade in Afghanistan that killed U.S. Sergeant Christopher Speer.

A spokeswoman for Public Safety Minister Vic Toews declined to say how quickly the minister might respond to Mr. Khadr's request but said a decision would be made "in accordance with Canadian law."

The 25-year-old convict has been eligible to come home for about six months but the Conservative government, known for its reluctance to repatriate Canadians imprisoned abroad, has been slow to act.

Under the terms of his plea deal, Mr. Khadr's eight-year sentence will be one-third over by July 1, 2013. At that point he would be eligible for parole under Canadian law, assuming he is, by then, in a Canadian prison.

The government refused to say where the prisoner might be incarcerated after returning.

One option, sources familiar with his case say, is the federal Special Handling Unit at the super-maximum-security prison in Sainte-Anne-des-Plaines, Que. Another option would be a Kingston, Ont.-area facility.

In selling the idea of repatriating Mr. Khadr Wednesday, the government also suggested it might keep the convict under restrictions and monitoring even after his eight-year sentence is up.

"A transfer into Canada's legal system allows for longer term protection of Canadian society through monitoring and other restrictions approved by a judge," a source said.

Bringing the prisoner home today would allow for greater tracking of him than if he served all of his time abroad and came back only afterward, a government source argued.

"The fact of the matter is that if we don't look at bringing [Mr.]Khadr back now, in eight years he would be able to walk onto Canadian streets a free man, able to continue to associate with radicals and terrorists," the official said.

"He is very much looking forward to rebuilding his life and returning to society. It sounds like a cliché but that is really what he aspires to."

U.S. presses for Omar Khadr's long-delayed transfer to Canada
May 9, 2018 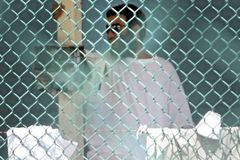 Deal could see Omar Khadr return to Canada by end of May: source
May 8, 2018 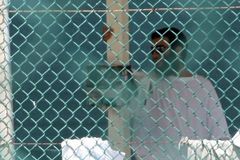