Stéphane Dion, considered an unlikely diplomat by some fellow Liberals, was removed as foreign affairs minister after just 14 months on the job because the Trudeau government felt it needed someone more skilled at the delicate task of steering Canada-U.S. relations in the Trump era.

The veteran of more than 20 years in federal politics is now weighing a job offer from Justin Trudeau that is believed to be an ambassadorship to the European Union or other posts in Europe. If Mr. Dion takes the job, his new boss would be Chrystia Freeland, who replaced him Tuesday as foreign affairs minister in a cabinet shuffle.

Liberals who have worked with the 61-year-old Mr. Dion, a former academic, describe him as extremely intelligent and hard-working, but some say he can be idiosyncratic, prickly and, that within government, he's not considered a master communicator.

After taking the helm at Global Affairs, Mr. Dion struggled to defend why the centre-left Trudeau government was proceeding with a deal brokered by Ottawa to sell $15-billion of combat vehicles to Saudi Arabia, a human-rights pariah. He insisted the deal, first clinched by the Harper government, was beyond the Liberals' control before it emerged that Mr. Dion himself quietly approved the export of the military goods, despite rules that sought to restrict shipment of weapons to countries that abuse their citizens.

"I think it's fair to say he kind of stumbled out of the starting gate with the Saudi arms deal … and he never really regained his stride," said Fen Hampson, distinguished fellow at the Centre for International Governance Innovation.

Mr. Dion took heat last June for standing by silently as China's foreign minister berated a Canadian journalist for asking about Beijing's human-rights record during a press conference. Mr. Trudeau later acknowledged how inappropriate the Chinese envoy's behaviour was and said Ottawa had complained to Beijing.

Another long-time Liberal who has worked with Mr. Dion said he lacks sufficient ability to read people – a challenge when navigating Washington under U.S. president-elect Donald Trump, a politician who has demonstrated he can be quick to take offence.

"The No. 1 job of a diplomat, especially the top diplomat, is relationships," the Liberal said. "It's all about relationships. [Mr. Dion] has got a bunch of strengths, but that is one area in which he was the wrong fit."

Mr. Hampson said it's apparent the Trudeau team chose to go with someone who's a better schmoozer.

"Trump is the great communicator and I think [the Prime Minister's Office has] come to the conclusion that they need a foreign minister who is also going to be an effective communicator at a time when there is a risk we could get sideswiped on a whole bunch of issues from auto trade to softwood lumber," Mr. Hampson said.

Mr. Dion released a statement wishing Ms. Freeland luck, calling his service in Ottawa an "incredible adventure" and saying he plans to "deploy my efforts outside active politics" in the future. His office said he is "weighing a substantial offer with his family that is befitting his service and experience."

Mr. Trudeau told reporters he's asked Mr. Dion to take on an extremely important role internationally, but did not elaborate.

An ambassadorship would be a final coda to Mr. Dion's career in public service that began in 1996 and saw him win the Liberal leadership in 2006, lose the 2008 election and then come close to becoming prime minister in a possible coalition government before being outmanoeuvred by Stephen Harper.

The Montreal MP may be best remembered for his work fighting separatism in the government of former Liberal prime minister Jean Chrétien following the 1995 Quebec referendum to leave Canada that was only narrowly defeated.

As Mr. Chrétien's minister of intergovernmental affairs, Mr. Dion was an unflinching voice for federalism when it wasn't a popular position in Quebec. He worked to counter false or misleading propositions by separatist voices. He was portrayed as a rat in some political cartoons, but he never backed down.

He sponsored the Clarity Act, which sets the terms under which Ottawa would negotiate the secession of Quebec after a Yes vote in a referendum to separate. The law says a clear question and a clear majority are required, but that Parliament will ultimately decide whether conditions have been met. Despite warnings from federalists and separatists alike, this did not feed a backlash in Quebec.

"On some very big, almost existential questions, such as the unity file … he was exactly the right guy and in his professorial, awkward persona, he kind of communicated that: that he was a guy who wasn't going to mess around with the future of our country and was not afraid to say and do the right thing," said Peter Donolo, who served as director of communications to Mr. Chrétien. 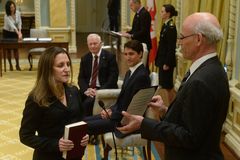 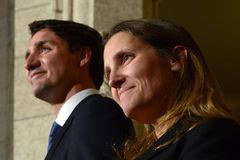 Opinion
Trudeau cabinet shuffle: Why an overhaul was needed
March 21, 2018

Freeland tasked by Trudeau to negotiate with Trump administration
March 21, 2018 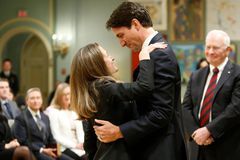