Justin Trudeau, whose family used an estate trust to save taxes on its fortune, would not say Tuesday whether he believes he's paying his fair share of taxes even as he pushes ahead with plans to end some tax breaks for small businesses.

The Prime Minister called a mid-morning news conference in Ottawa to talk up the Liberal economic record and staunchly defend the government's controversial small-business tax changes.

Mr. Trudeau appeared to be caught off guard when reporters pressed him on why he was prepared to ban certain tax-avoidance measures that benefit small business when his own family has used other legal structures to also lower total taxes paid on the wealth left by his late father, Pierre Trudeau.

Read more: How the wealthy reduce the tax-man's take

Several years ago, the Prime Minister said his inheritance was only worth $1.2-million, but his wealth today includes further undisclosed distributions from his father's estate in 2016 and interests in several numbered companies.

He avoided answering a direct question Tuesday on his family's use of a trust – which can help reduce taxes payable – and whether the Trudeaus have paid their fair share of taxes. Instead, he told reporters that he relinquished control of his assets in 2014 after he won the Liberal Party leadership.

"I no longer have dealings with the way our family fortune is managed and I have been open and transparent about that. And I have been entirely consistent in my desire not to be perceived as bending or breaking any rules," Mr. Trudeau said. "Obviously, we follow all the rules and I am assured that the folks who are managing my personal finances are following all the rules."

The Pierre Trudeau estate trust was a testamentary trust used to manage assets of the former prime minister's estate, according to Le Journal de Montreal. It said this vehicle was used to manage several assets that Trudeau Sr. passed on to his sons after he died in 2000. One benefit of testamentary trusts for decades was tax savings through income splitting with the beneficiaries. (This benefit was limited under changes brought in by the Harper government in 2014.)

The Liberals are currently facing a backlash over proposed changes to tax rules that affect incorporated small businesses known as Canadian-controlled private corporations. One would limit the ability of a business owner to "sprinkle" income to family members who do not work directly for the business. Another change would restrict the ability to convert income into capital gains as a way of paying less tax, while a third, less-developed proposal, would restrict the use of an incorporated small business as a vehicle for making passive investments unrelated to the business.

Business lobby groups say the changes will discourage entrepreneurship and could chase businesses and professionals – such as doctors – out of the country. The Liberals say they are raising taxes on high-income Canadians in order to provide more benefits for low-income and middle-class Canadians.

Don Drummond, a former senior official at the federal Finance department, said neither the existing rules that allow small businesses to "sprinkle" income to family members nor family trusts are the sort of tax measures that Canadians would likely support if they were proposed in 2017.

"Ask yourself the question: If these preferences didn't exist today, would you ever introduce them tomorrow? And the answer would be a resounding no."

Mr. Trudeau was also asked on Tuesday whether he would put an end to family trusts. He replied his focus right now is on small-business tax reform.

"We are always open to new suggestions, but now we are open to [making] sure that the wealthiest Canadians are not encouraged to use private corporations to pay a lower tax rate than the middle class," he said.

The Prime Minister was subsequently asked by a reporter if he was prepared to publicly reveal the tax savings his family received by using a family trust and or the private corporations he owns. He again declined to answer the question.

Mr. Trudeau's disclosure form for the Office of the Ethics Commissioner says he earns dividends from a company named 7664699 Canada Inc. He has sole ownership of 7664699, which also holds "a significant interest" in another company, 176078 Canada Inc.

The sole director of 176078 is Louise Houle, a wealthy Montreal tax lawyer, whose website says she has "extensive experience in family trust and offshore trust matters." Ms. Houle is the secretary of the Pierre Elliott Trudeau foundation, among others. That foundation operates with the help of a $125-million endowment granted by Jean Chrétien's Liberal government.

The Prime Minister is also a joint owner with his brother, Alexandre, of 9190-0563 Quebec Inc. The corporate profile says its activities in the Laurentian countryside include real estate development and the production and sale of timber and firewood. Its most recent evaluation for property tax (2017-19) was $2.73-million.

The property includes two lakes and a cottage designed by Arthur Erickson.

The Prime Minister was also an equal owner in Pierre Trudeau's historic Art Deco house in Montreal, which is evaluated at $2.35-million. Ownership of the property was fully transferred to Alexandre Trudeau in 2005. It is not known what the Prime Minister's brother paid him for his share of the home.

Justin Trudeau comes from a wealthy family dating back to his grandfather, Charles-Émile Trudeau, who owned real estate, an amusement park and a string of gas stations in Montreal in the early 20th century. Pierre Trudeau inherited some of his father's money and later divided it among his children by setting up trust funds.

As Prime Minister, Justin Trudeau earns $340,000 annually and lives for free in a house on the grounds of Rideau Hall, as well as having access to a private government-owned lakeside cottage in the Gatineau Hills. 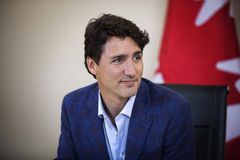