A Mississauga parent is keeping her two children home until Wednesday because of high temperatures in their classrooms.

Mariola Fik-Izydor said when she picked up her daughter from St. Basil Catholic Elementary School last Thursday, she noticed the child had developed a heat rash on her chest and back. She then attended the school's barbecue that night and experienced the warm conditions for herself.

"It was already really hot and not comfortable at all. I couldn't even imagine how bad it was during the day," she said.

In Brampton on Monday, a second-floor classroom in a elementary school reached a temperature of 30.2 C before 11 a.m. Matthew Jackson, president of the Peel Elementary Teachers' Local, said the heat in the room was stifling.

A heat warning was issued on Monday by Environment Canada for Southern Ontario, as temperatures were expected to be in the low 30s with humidex reaching 40.

"It's hard to keep the kids engaged. They wilt as much as we do, if not more," Mr. Jackson said.

"You're trying to teach them a curriculum at the same time as you're trying to make sure that no one is dehydrated and at risk of any health concerns," he said.

The Elementary Teachers' Federation of Ontario (ETFO) issued a news release on Monday asking the provincial government to address "unbearable conditions" in classrooms without air conditioning.

"Schools found themselves in the same situation one year ago. Our changing climate is sending a strong message that the Ministry of Education needs to take action. Too much student learning will be lost the longer the Ministry delays," ETFO president Sam Hammond said in the statement.

The release asked the province to act on the motions the ETFO made at its annual meeting in August: ensuring all schools have plans to cope with heat, setting an indoor temperature limit and supplying all elementary schools with a form of air conditioning.

"We understand the concerns that have been raised by students, parents and teachers with regard to the impact that this warm weather is having in the classroom. We fully recognize that when the classroom is too hot, it can make it uncomfortable for staff and students," said Richard Francella, spokesman for Education Minister Mitzie Hunter.

"That's why, starting this year, we're providing schools across Ontario with an additional $1.4-billion so they can make investments in building upgrades such as air conditioning," he said. This investment was first announced in June.

"We want local school boards to have the autonomy and flexibility to be able to use this money on local needs as they see fit."

The Ontario Occupational Health and Safety Act doesn't currently include a maximum temperature acceptable in the workplace.

A weather plan outlines how to cope with a heatwave, and has been reissued to Peel schools, Mr. Jackson said.

In Toronto, similar guidelines exist for staff, said Ryan Bird, spokesman for the Toronto District School Board, where out of 584 schools in the board, only 125 are fully air conditioned.

Protocols for schools in both boards with partial or no air conditioning include closing blinds, using fans and turning off lights. Where possible, students will relocate or cycle through to cooler areas in schools. Strenuous gym activities may be reduced and schools may decide to reduce time outside in cases of extreme heat.

"We do our very best to keep people as cool as possible. We do know it's going to be hot, but we try to minimize it wherever we can given the circumstances," Mr. Bird said.

Over the next five to seven years, the TDSB has plans to cool large areas, such as a gym or library, in schools that do not have full air conditioning, so students can access them on hot days.

Mr. Bird said the cost to install complete air conditioning in all schools currently without it would cost hundreds of millions of dollars, not including maintenance and operation costs.

Andy Lomnicki, president of the Elementary Teachers of Toronto union, said that if the government heeds its own education from the community and union, they'll see the need to invest further into school facilities including air conditioning.

"In a few weeks or months we'll have the same conversation about heating. People aren't looking at a five-year solution being helpful or realistic. I think we have to start getting our heads around making that more immediate," Mr. Lomnicki said.

"There's no magic answer for that. It's got to be through funding." 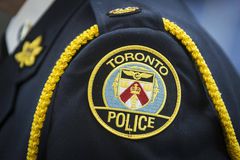 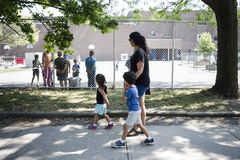 Debate over police officers in classrooms spreads to GTA
September 22, 2017 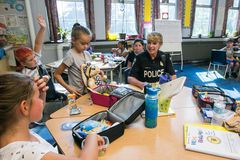