The sound gives him away first: a steady swish swish swish of bristles on concrete. Look out the window and you see an old man with an old broom, making his way down the street. The sweeper is at work.

For as long as the neighbours can remember, Luis Ferreira has been cleaning our little stretch of pavement on a west-end Toronto street. He is out day after day, in all sorts of weather, sweeping the leaves and litter into neat piles. He sweeps the broad laneway behind the houses, too.

Even the recent oppressive temperatures did not keep him from his rounds. He was out there for an hour or two in the heat of the afternoon, wearing plastic sandals, baggy sweat pants and a white T-shirt. An old baseball cap covered his silvery hair.

It's awfully hot, passersby would tell him. Yes, he would nod, then put his head down and go on sweeping. He had a job to do.

Sweeping has become his occupation, even his obsession. He does the sidewalks of a dozen or more houses, including his own. He often does the paths, as well, sweeping right up to the front steps. "Nobody pays me money," he says, "but I like the city nice and clean."

His zeal makes neighbours feel both grateful and guilty. A couple of them have tried to slip him some cash for his trouble. He proudly waves them off. Others give him brown-paper leaf bags. One concerned woman tried to give him a dustpan with a long handle so he wouldn't have to bend over so much. He rejected the offer. He prefers his own methods.

His middle-aged children worry about his health. They got him an orange vest to make him more visible as he sweeps. He wouldn't wear it. They are afraid to get him a new broom – it might encourage him – so he uses the old one with bristles worn to stubs a couple of inches long. They take turns looking in on him and fixing him meals. He always insists he is just fine. He doesn't need anyone's help.

Mr. Ferreira is 92 years old. He has lived on the street since 1960, in a skinny Victorian house he bought with a friend for $15,000. He raised four kids there. His wife died in 2011. He keeps a small shrine to her – photograph, candle, Christian figurines – on a table in his living room.

He has worked hard all his life, he will tell you, looking you straight in the eye to show he means it. He learned to work growing up in Sao Miguel, an island in the Azores, Portugal's Atlantic archipelago.

After immigrating he took all sorts of jobs – "anything I could pick up" – to support his family. He worked at Toronto Hydro. He worked at road construction, helping build Toronto's streets. In summers he often left the city to pick tobacco, earning money that would carry the household through the winter.

He did all the house repairs himself: roofing, plumbing, the works. He made his own wine, bottled it and gave it away as gifts. He put out an elaborate array of Christmas lights.

Like many of his immigrant neighbours, he brought an old-world attitude about the way things should look. The front of a house, its face to the world, should be tidy, trim and orderly. Many of the Portuguese families in the neighbourhood put paving stones or fountains in their front yards. If they kept grass, it was cut to within an inch of its life. Nature was something to be kept firmly in check.

Mr. Ferreira has been known to weed the gardens and trim the bushes of less scrupulous neighbours. The other day he cut short some clumps of ornamental grass a couple up the street had planted along their path. They thought it looked pleasingly wild; to him, it was just overgrown.

From the start, he kept his own walk dinner-plate clean. He did sweeping and shovelling for neighbours, too, especially the widows or widowers. Even now he is often the first out in the laneway after a snowfall. A neat square appears behind his garage, setting him apart from his tardy neighbours, many of them decades younger.

Newcomers to the neighbourhood – and to veterans like him that includes those who arrived a quarter century back – have a more casual approach to outside maintenance. Those with kids and careers don't always get out there right away to clear the leaves. Mr. Ferreira does not approve. These days, he says, people just don't care.

He doesn't sweep up because he is a sweet old guy who just wants to do a good turn for others. He does it because it needs doing. If others won't shoulder their responsibilities, well, he is the man for the job. He knows his duty, even if his neighbours don't.

Mr. Ferreira is looking a little frail the past couple of years. But he won't move to someplace easier – he tells his devoted kids he'd like to be buried in his backyard, in a box of his own making – and he certainly won't stop sweeping. It seems to give him purpose. It is what he does.

This past Wednesday night, when the weather finally broke, people on the street opened their windows to let the fresh, cool air in.

Well after dark, at around 10, they heard a familiar sound drifting in from the street. Swish, swish, swish. It was Mr. Ferreira, back at work. He had spied a few more leaves, a few more scraps of paper. If he didn't clear them, who would?

Opinion
Don’t whitewash Rob Ford. Naming a stadium after him would be erasing history
September 28, 2017 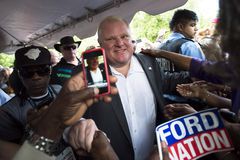 Opinion
Wynne government has no business meddling in markets
September 22, 2017

The upside of the Margaret Atwood uproar: NIMBYs are on the defensive
September 8, 2017