I'm a Toronto boy, from a Toronto family. Both sets of my grandparents lived here. My mother and father grew up in the Beach and never lived outside Toronto. I have spent five of my six decades in this city, leaving only to go to university, then work overseas for a few years.

Familiarity bred if not contempt, then at least indifference. My father, a Mad Men-era advertising executive, was an admirer of things American who got his dose of big-city life on business trips to New York and Chicago. Growing up, I came to share his conviction that life was happening somewhere else.

As soon as I was out of high school in North Toronto, I headed out to live in other cities – first Vancouver, then Hong Kong, Singapore, Manila and Sydney. When I came back to Toronto, marrying and raising a family here, it felt a bit like settling. Toronto was a place to live but never to love.

But over time, and especially over the past few years, my feelings for my hometown have grown. The dull, earnest, mostly white city where I grew up has changed, and just about all the changes are to the good. For all its faults and failings (my subject on most days), Toronto is thriving in ways that my grandparents could never have imagined.

The streets are livelier, the population infinitely more varied. The arts are flourishing as never before. Street festivals, charity runs and other celebrations of urban life fill the weekends. Construction cranes crowd the horizon. The air and water are (believe it or not) cleaner.

Toronto, all in all, is a far better place than it was when I returned here 30 years ago.

Walk along Queen Street West on a weekend and you can't help but marvel at the flourishing street life: people walking dogs, cycling, skateboarding, laughing with friends, pushing strollers, ducking into coffee shops. Drive through one of Toronto's leafy residential neighbourhoods and it strikes you how pleasant and stable they remain, despite the explosive growth of the metropolis around them. Venture into the downtown core and you can only wonder at how it is growing – higher, denser, livelier.

New office towers are rising right and left. Cranes crowd the skyline. Those high-rise condos that everyone likes to complain about have brought vivid new life to the streets. The hum and bustle of a living city is palpable and it's thrilling.

When I was very small, my father took me to the observation deck at the top of the Bank of Commerce tower, the tallest building in the British Commonwealth at the time. I remember how my head swam as he held me up to peer over the stone railing of the observation deck. Today you can barely find the old bank building among the thickets of skyscrapers.

Up Yonge Street at Eglinton, something similar is happening on a smaller scale. My father had his advertising business there, near the northeast corner. I went to high school a couple of blocks away, at North Toronto Collegiate Institute.

Now the old fortress that was NTCI is gone, replaced by a modern new school funded through the sale of land to a condominium complex. More condos are going up all around. Eglinton is being dug up for the Crosstown light-rail line. Thousands of people are coming to live and work in this growing neighbourhood, so much busier, more vibrant and more urban than when I went to school there.

The North Toronto of my youth was monochrome. NTCI had just a handful of people with non-European ancestry. The one Chinese boy in my Grade 9 class stood out. His parents ran a laundry on Yonge.

Today, the school, though still less diverse than many in Toronto, is a world away from what it was 40 years ago. A third of students list a primary language other than English. It is like that just about everywhere in Toronto. In my own kids' school, it was they who stood out for their white faces and British background.

After decades of mass immigration, the city's diversity is so accepted and so commonplace that it has become a cliché, a tired line in every politician's speech. It is miraculous all the same. Few places have absorbed so many newcomers from so many places with so little strife. It is doubly miraculous that it happened in dour old Toronto, a place that once saw conflict between Catholics and Protestants, gentiles and Jews.

When I left Toronto all those years ago, I was going in search of a wider world. I could never have guessed that when I came back here, the world would come to me.

The problems that Toronto faces – expensive housing, traffic congestion, crowded transit, stressed infrastructure, income inequality – are largely a product of its success. Houses prices rise because people are eager to live here. Roads are jammed and streetcars full to bursting at rush hour because this has become a teeming modern city. The gap between rich and poor becomes more glaring because big, successful cities draw both like a magnet – the poor for the opportunities, the rich for the pleasures.

That is not to diminish the problems, just to put them in perspective. Thanksgiving weekend is a good time to remember how far this city has come. The Toronto I fled after high school is gone. The Toronto that has replaced it is an altogether different, altogether astonishing place. That is something to be thankful for. 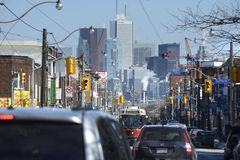 Put a World Series ring on it: Couple recall their Blue Jays filled wedding
May 15, 2018 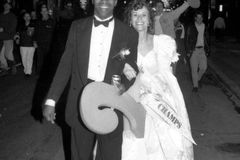