Robert Amsterdam looks like he has just returned from an expensive safari.

His outfit of boat shoes, cotton shirt and pink shorts indicates a man at leisure. So do his gold watch and fashionable stubble.

But the Canadian lawyer seems anxious. His eyes dart around the lobby of his Toronto hotel; he has agreed to speak with The Globe only on the condition that the location of our meeting not be published.

Raised in Ottawa, Mr. Amsterdam has built a global career working as a legal gun-for-hire and public-relations svengali for such exotic clients as the persecuted Russian oligarch Mikhail Khodorkovsky and the former Zambian head of state Rupiah Banda.

His latest gig is counsel to the Turkish government. Mr. Amsterdam is part of the country's continuing diplomatic blitz to convince Western governments that Fethullah Gulen, the Islamic cleric allegedly behind Turkey's failed coup last month, is a terrorist and cult leader who should be thwarted wherever he operates, including in Canada.

Since the July 15 coup attempt, Mr. Erdogan has presided over a vast purge of the justice system, military, academy and press, with some 80,000 people being detained or suspended from their jobs. Mr. Amsterdam's goal, and that of several Turkish delegations spread across the globe this week, is to depict the crackdown as a fair and proportionate response to the Gulenist onslaught.

The mild-mannered cleric, until recently a political ally of the Turkish president, is a "vicious anti-Semite" and leader of a "secretive cult stealing money left and right," Mr. Amsterdam charged.

That may seem a rash way to describe a man best known for his network of charter schools, the promotion of inter-faith dialogue and a social movement known as Hizmet, or service.

But it is soft soap compared to the rhetoric being used by Turkish officials speaking to the foreign press this week, who have compared the Gulenists to ISIS and al-Qaeda.

Ever since a falling out between the leaders in 2013, Mr. Erdogan has been trying to brand his rival as a sinister Islamist bent on building a "state within a state" and seizing control of the country. As recently as May, the Turkish government officially labelled the Gulen movement a terrorist group. Since the abortive coup, the government has painted its crackdown as an effort to root out dangerous Gulen loyalists, rather than mere political opponents.

Many Turkish liberals really do believe that Gulen supporters have penetrated state institutions on a massive scale, with the goal of imposing some kind of Islamist regime, said Kemal Kirisci, director of the Turkey Project at the Brookings Institution. The failure of Western leaders to take the scenario seriously is a source of frustration in Turkey, and a major reason for the current international PR campaign.

"There is a 70-year relationship, and still a failure to understand Turkey at this time," Mr. Kirisci said.

Sitting on a crushed-velvet sofa in the hotel lobby, Mr. Amsterdam described a decades-long process of Gulenist infiltration in Turkish society, beginning with the recruitment of promising schoolchildren and extending to rigged military exams.

It's like stories about the nefarious power of "the Illuminati or the Masons," Mr. Amsterdam said – only true.

To hear the Canadian lawyer tell it, Mr. Gulen's influence extends even to the United States. He lives at a compound in rural Pennsylvania and his network operates more than 100 American charter schools, which Mr. Amsterdam says are rife with fraud, and protected by sympathetic U.S. politicians.

Armed with a sheaf of documents purporting to expose the Gulenist plot in America, Mr. Amsterdam claims to shun rhetoric.

"We don't use adjectives," he said. "We investigate."

A delegation of Turkish politicians visiting Canada this week dispensed with any such tact. Officials from three of Turkey's four main parties have now visited Toronto, Ottawa and Montreal. Meanwhile, Turkish envoys have also been dispatched to France, Britain and the United States in recent days. At a gathering for journalists at the country's consulate in Toronto on Wednesday, glasses of black tea and sesame-encrusted baked goods did little to offset the group's gloomy message.

"This is an awareness tour," said Cemalettin Kani Torun, a member of the ruling AK Party and vice-chair of the country's foreign affairs committee.

It was certainly not a charm offensive. Diplomatic graces were set aside as the Turks browbeat Canada's political establishment for more than half an hour. Describing the Gulenists as a "Messianic cult" and terrorists who are "sometimes worse than ISIS," Mr. Torun dismissed criticism of his country's press crackdown.

"Would bin Laden or ISIS be able to operate a media organization in your country? Of course not," he said.

If Mr. Gulen moves to Canada – and the delegation suggested, based on rumour, that he had already bought a compound in Ontario – it could be a "landmine" for the bilateral relationship, Mr. Torun warned.

With Turkey sitting 34th amongst Canada's top trading partners, it might be asked what this landmine would be blowing up. But Mr. Torun had a ready explanation for what Canada could stand to lose if the Gulenists prevail.

"If Turkey fails," he said, "many million refugees will come to the West. So our message is to support the Turkish government."

In Mr. Amsterdam, the Turkish government has a Canadian willing to deliver the same message. He will not, however, be relaying this message to Canadian officials directly, because most of them are on vacation, he explained.

"I'm a Canadian – I know better than to hit people when they're in Muskoka," he said with a grin.

Turkey detains 10 foreigners over suspected ties to Gulen
May 16, 2018 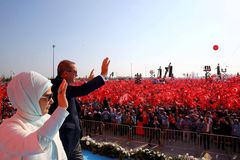 Massive crowds gather in Istanbul for anti-coup rally
May 16, 2018 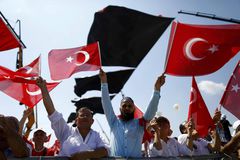